We hadn’t gotten far with our overseas planning for April before we felt that we deserved a break and go somewhere close by for dinner. I had quizzed Indian co-workers to find out which Indian restaurant was the best in Canberra and they had suggested Mirchi in Ngunnawal. Not only had I not heard of the restaurant, I was excited to go where Indians go (like how it’s a good sign if an Asian restaurant is full of Asians). The discussion came up that the butter chicken I’ve been eating all my life was one big lie, one big… delicious… sweet lie. Butter chicken is not supposed to have all the cream and sweetness that we have been getting fed but rather more spicy, they give it to us because that’s what we really like.

Mango lassi ($4.00 each). It has a thick yoghurt texture but it isn’t like every other restaurant as they use a hint of cardamom that we found very addictive.

Everyone had a ‘go to’ dish so instead of ordering four dishes between the five of us, we ordered five mains and an entree.

Samosa Chaat crispy samosa topped with sweet and sour yoghurt, topped with tangy tamarind and mint sauce ($8.90 for 2 pieces/$22.25 for 5 pieces). It wasn’t until I wrote this description did I notice all the lacking condiments, we all agreed that these were very nice but it would have went better with the usual yoghurt sauce rather than just the tamarind sauce that were given. I feel a bit jipped now. I couldn’t necessarily tell that there was meat inside these samosas but it didn’t matter because there was a lovely filling encased in crispy pastry.

All it needed was a hint of mint yoghurt to balance out the sweet tamarind sauce.

Mains~ My phone didn’t really capture all the different rich colours of each curry but to me they were all very distinct looking despite my friends being confused about which curry was which.

Lamb Rogan Josh traditional Kashmiri styled lamb curry with fennel and garam masala (medium $16.90). This wouldn’t usually be a curry I would order and I definitely wouldn’t push the envelope and order it with ‘medium heat’ either but this was surprisingly the best dish of the night. It has a really strong lamb taste, the meat was soft and tender and there is only enough heat to let you know it is there.

Butter chicken tender pieces of boneless chicken cooked in the tandoor, then pan finished in a rich, creamy tomato sauce (mild $16.50). Still creamy but a lot less sweeter than most butter chickens which gave it more in-depth flavour. 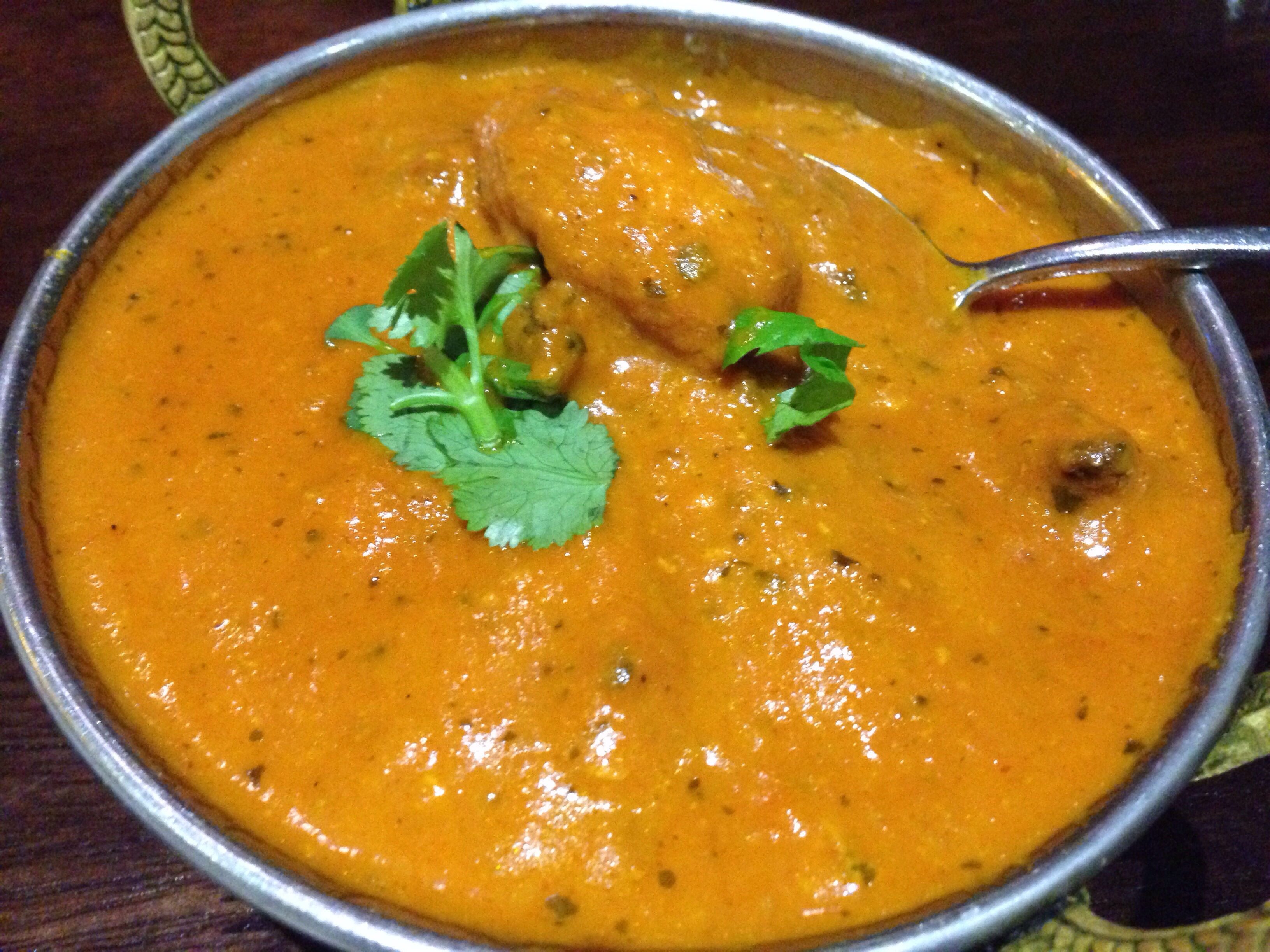 Beef Korma tender pieces of beef cubes delicately spiced with cardamom, yoghurt in ground cashew nuts based gravy (mild $16.50). A very nice nutty based sauce with tender beef, this might have been better if we upped the spices too.

Aloo Gobi a Punjabi favourite of cauliflower, and potatoes cooked in the wok with onions, tumeric and fresh herbs and spices ($14.90). This had a very rich onion/tomato flavour, the only disappointing thing was that there seemed like there was a lot more potato than cauliflower in the dish.

Palak paneer a classic vegetarian dish of fresh ground spinach and cheese cubes cooked with onions, garlic and mild spices ($15.50). The spinach was blended beyond recognition only lending itself to the colour and not the texture but the disappointing thing was it didn’t have much spinach flavour either. The paneer was surprisingly super soft but seemed like it didn’t have much of a saltiness to it leaving the dish overall a bit bland.

The paneer was super soft that some of us had mistaken it for tofu.

Garlic Naan leavened bread with garlic freshly baked in the Tandoor and smeared with butter (4 pieces between the 5 of us was just enough $3.50/naan). The naan came out piping hot emitting a powerful garlic scent. Definitely one of the better naans I have eaten.

Aromatic basmati rice steamed basmati rice with cumin and saffron colour (4 serves between the 5 of us $3.00 per serve).

You can taste the love and care that has been placed into the preparation of the food. The meat in the curries were tender and flavoursome, the curry bases all had distinct flavours, weren’t oily and didn’t make you feel overwhelmed at the end of the meal (if you controlled yourself *looks at the boys*). I would have been keen to try desserts but we were waaay to full; there was just enough food for one of us to pack a lunch with an assortment of curries. Maybe we’ll be less greedy with our ordering next time.

Not just your average Indian take out but a proper Indian restaurant that has food you can really enjoy. I’m keen to go back and ask for a ‘traditional style’ butter chicken.