After eating a massive morning tea with at least four different desserts on my plate balanced out by lots of cheese, I found myself out at lunch an hour later clutching onto my tummy, but I perked up again when I realised I requested to go to Da Rosario for my birthday lunch. I’m a big big fan of Italian food.

We found it easily enough even though it was just a few tables on the walkway just outside of Mezzalira and Charcoal restaurant. There is no actual ‘inside’ for patrons but there is a hole in the wall which has a cake/sandwich display built into it and enough room for a basic assembly kitchen, all the food is made in the Mezzalira’s kitchen and pizza oven. 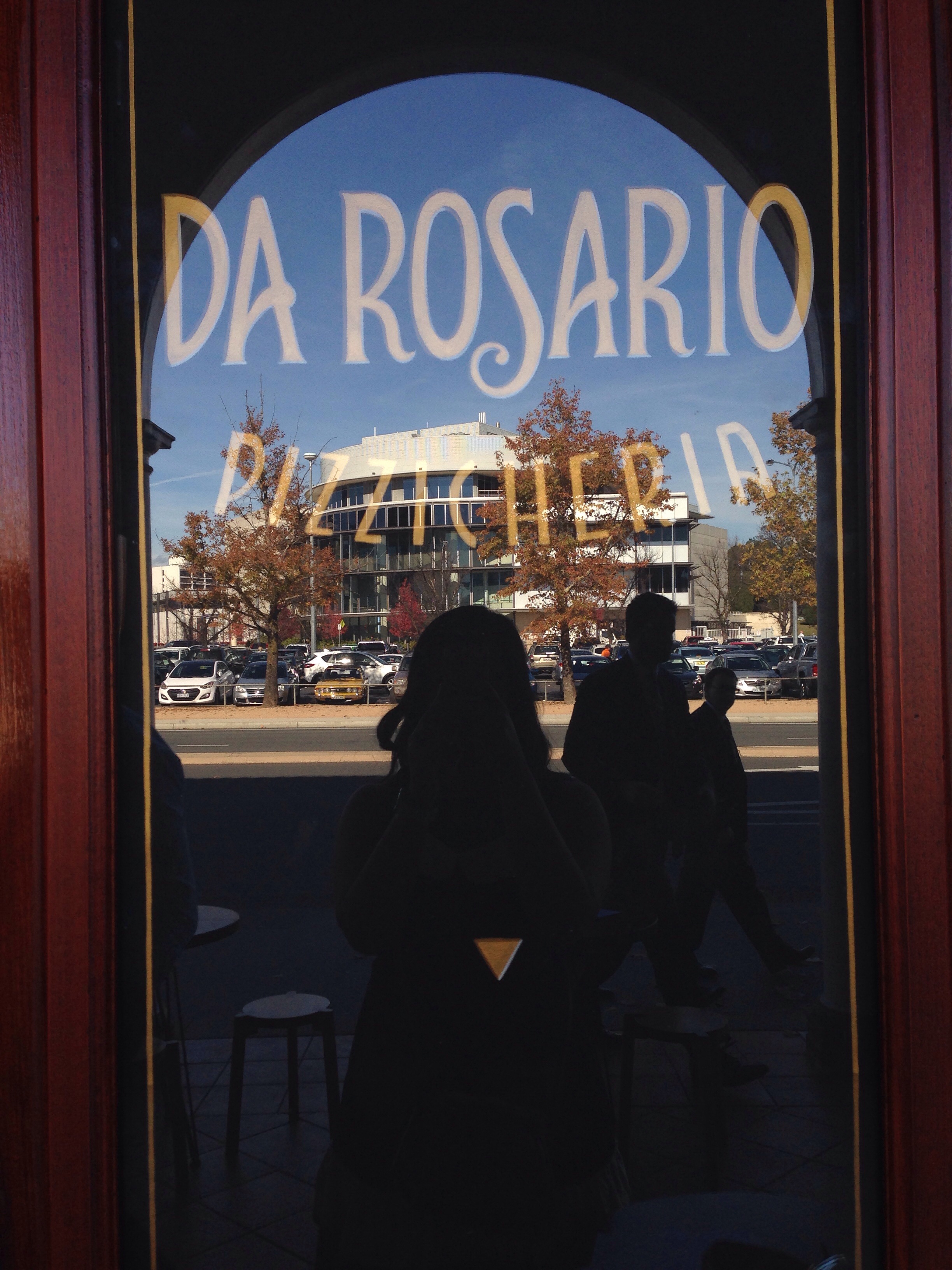 I love these beautiful doors and the gold signage. 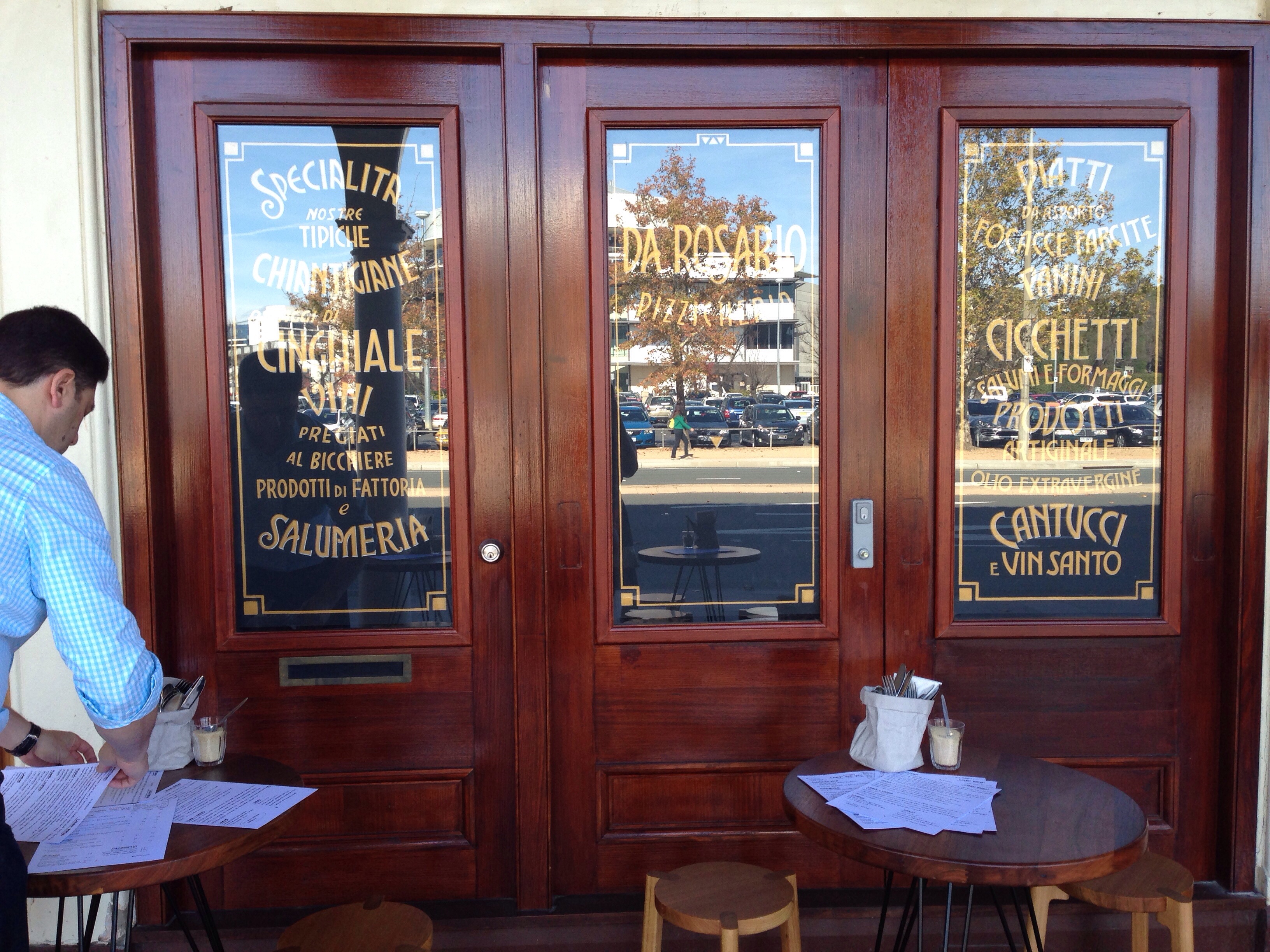 They menu is a bit hard to read with the paper having a patterned background and the particular font they used but I thought the ‘sacks’ of cutlery and napkins were super cute. 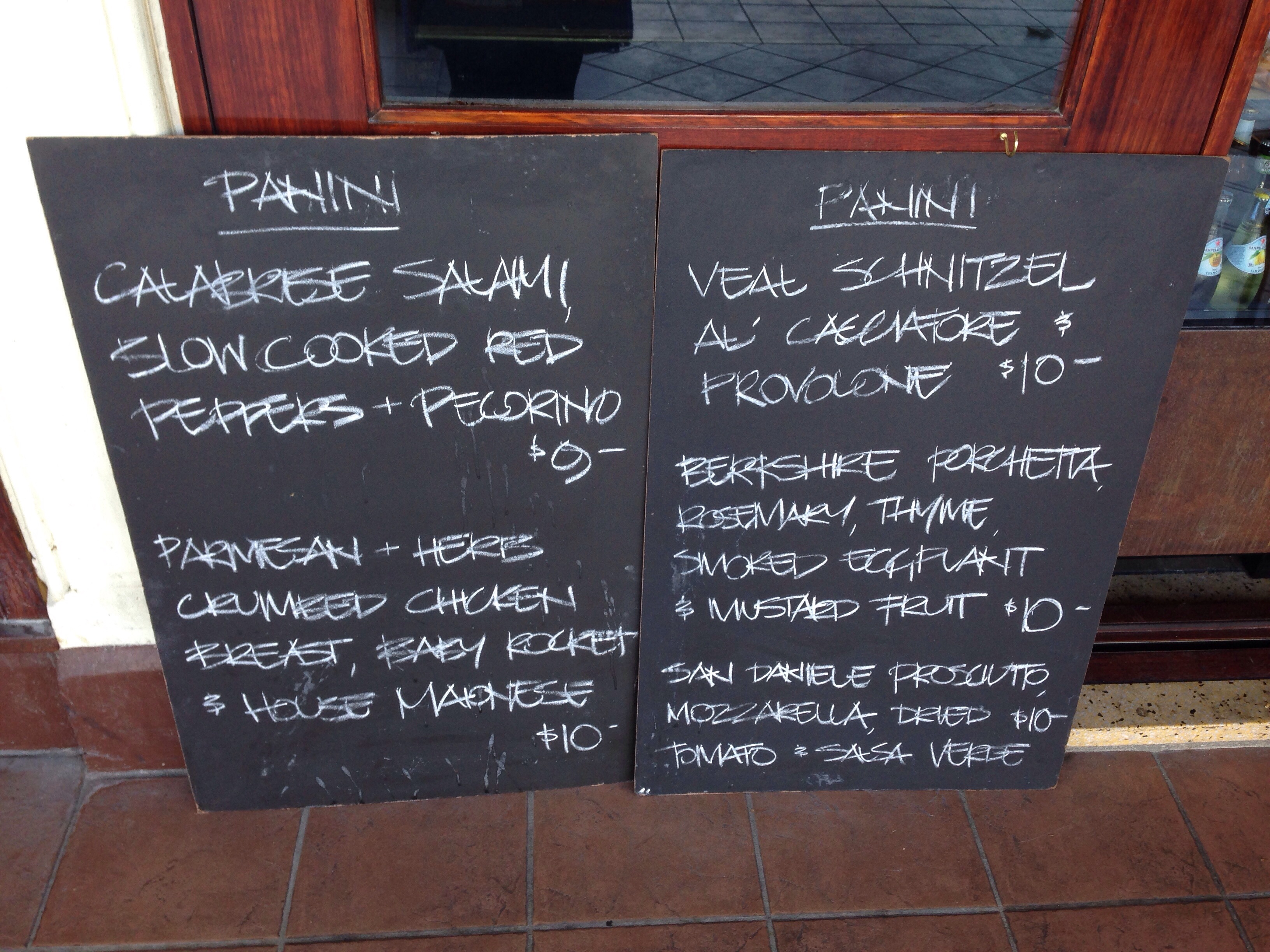 Didn’t I tell ya it was small?!

When you’re sitting down, you’re not really bothered by the hoards of people walking past but it proved a bit harder for the waiters to dash between people while holding plates.

My friend ordered a glass of white wine. We all found it amusing that the wine was poured into the same sort of glass that our water was served in and further more, how small serve of wine was for $10.00! (We then saw on the top of the menu that a glass was = 100mL). 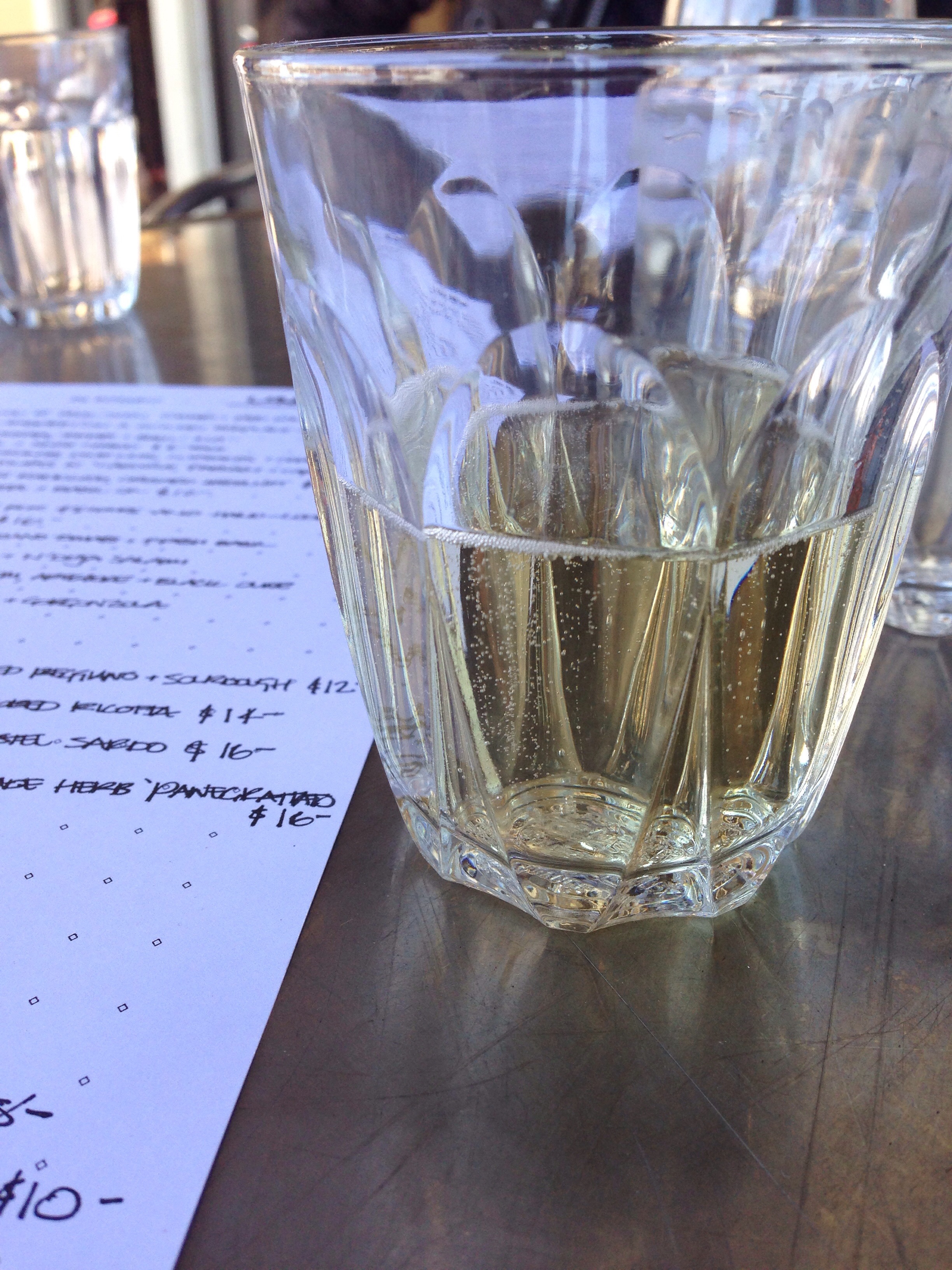 Polenta ‘crochette’ with gorgonzola and swiss chard ($4.00 each). The croquette was slightly oily but it did have a crispy outer layer and a delicious soft cheesy filling. I wish it wasn’t $4 a pop for 1.5 bites.

‘Arancini’ risotto ball filled with veal shin, tomato and red wine ragu ($4.50 each). This was one of the biggest arancini balls I have ever seen! It also had a crispy exterior but I’m afraid that the filling didn’t ‘wow’ me all that much. In comparison to the other entrees it was disappointing.

Eggplant parmigiana house smoked ricotta and basil oil ($12.00). Imagine a tasty layered lasagna with sheets of eggplant. This was mighty tasty and even if it was $12 for this small portion, I would order it again. The ricotta on its own tasted super smoked but really complimented the parmigiana when paired together in a mouthful.

Mmmm, check out that cheese and layering.

Northern rivers veal, marsala with king brown mushrooms, thyme and nicola potato ($19.00). I only tasted a bit of this dish but the potato mash was extremely creamy and soft and the sauce was addictive and salty. My friend tells me that the veal was very tender. I would order this dish.

Linguine al neonata (? I think that’s what the menu said) with whitebait, chilli, white wine, house made herb pangrattato ($16.00). The pasta was al dente with a lot of the flavours being simple and fresh. The fish and pangrattato was a bit too salty for my friend but I thought it gave a good flavour to the dish. I didn’t know how the whitebait would turn out but it was delicious and I would order this dish.

A close up of the whitebait.

Patate ‘fior di latte’ ,mozzarella, potato, rosemary and gorgonzola pizza ($16.00). As usual, I couldn’t decide on what dish to order so the waiter came to my aid and helped me decide between the lasagne or a pizza. He said as nice as the lasagne is, the potato pizza is particularly good. I’ll go with the pizza then.

The pizza had a perfect thickness to it, having a crispy crust with a sturdy base to the pizza topping. The subtle dollops of gorgonzola throughout the pizza provided the perfect amount of salt and cheese. The potato was cut thinly for it to be cooked through and went very well with the rosemary. Definitely worth trying! 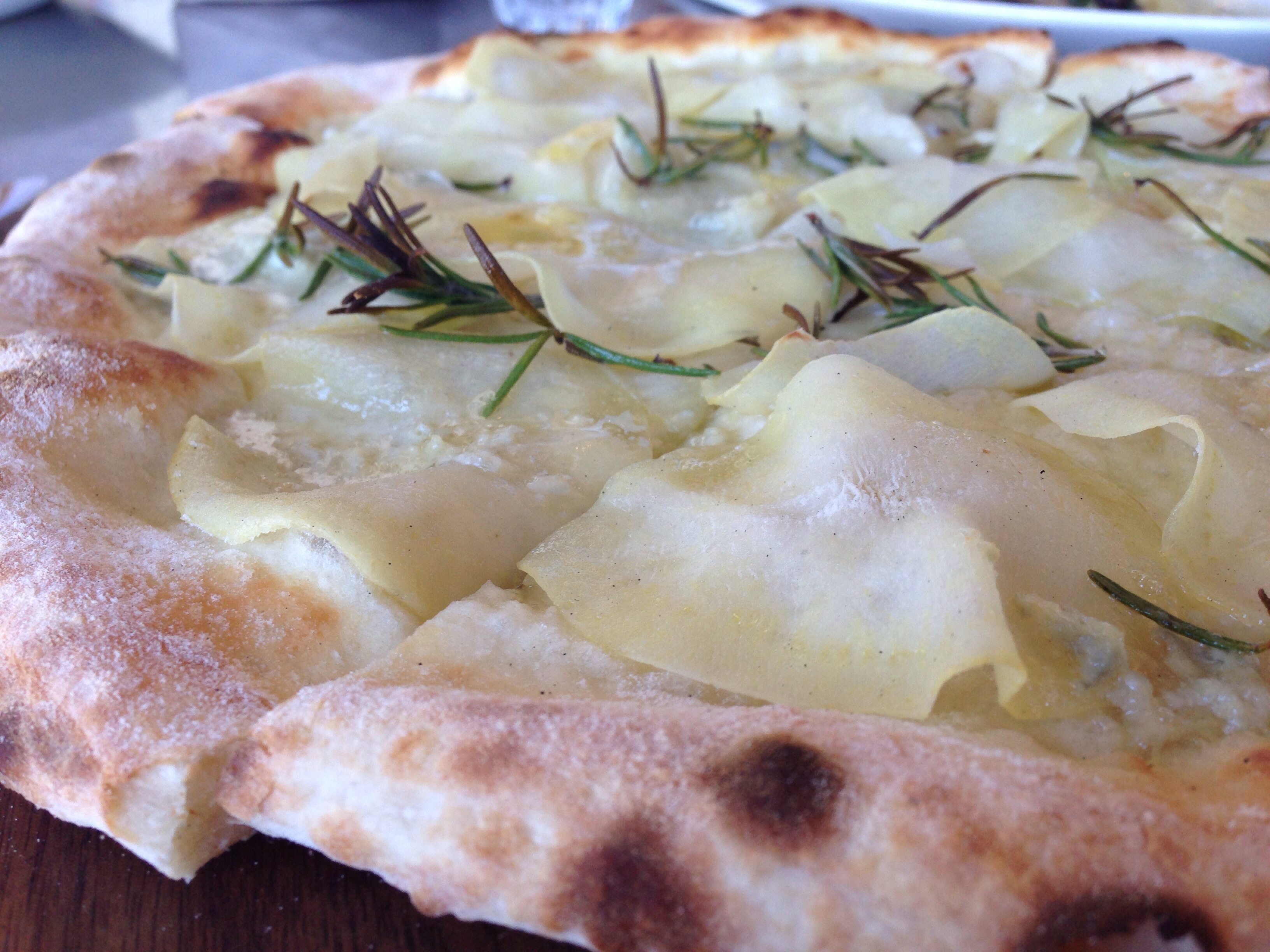 I really love their tiramisu (if it is anything like Mezzalira’s) and I totally would have had two if I didn’t just scoff my body weight in cake just before.

The staff were friendly and helpful. Not only were they attentive to our table water supply, they constantly topped up our glasses. Arriving just after midday, we had our pick of seats but not long after all 8 tables were taken and they were in the process of adding two new tables. A small cute set up with delicious food and simple stand alone flavours. If civic wasn’t so hard to get a park, I would come and eat here more often.

**A small handy note – they don’t take reservations and they are only opened for breakfast and lunch.