Knowing that it was an impromptu lunch to fulfill my friend’s craving for pasta, I suggested that we go early to Parlour Wine Room as we didn’t have a booking. We arrived just before midday and were limited to a few tables which filled up quickly with other ‘walk in’ patrons, we were lucky as during the lunch service we saw several people get turned away due to lack of space.

We were partially going to the Parlour Wine Room to take advantage of the lunch special of a drink (soft drink or house wine) and a meal for $16 but we were really there to taste the food so that’s why we couldn’t help ourselves but to order something extra with our meal.

We were quickly set up with table water, lunch specials menu, normal menu and a drinks menu when we were seated.

I love their funky cutlery and choice of lunch specials. I love myself a croque monsieur but it was definitely a soup weather kind of day.

Too pretty to eat off but when the food came, I was more than happy to make a mess on top. 😀

I love the unique lounge seating they had all over the place. The tables are often moved around to accommodate for large bookings etc and whilst also being round and small, I would find it squishy to sit with a large group. 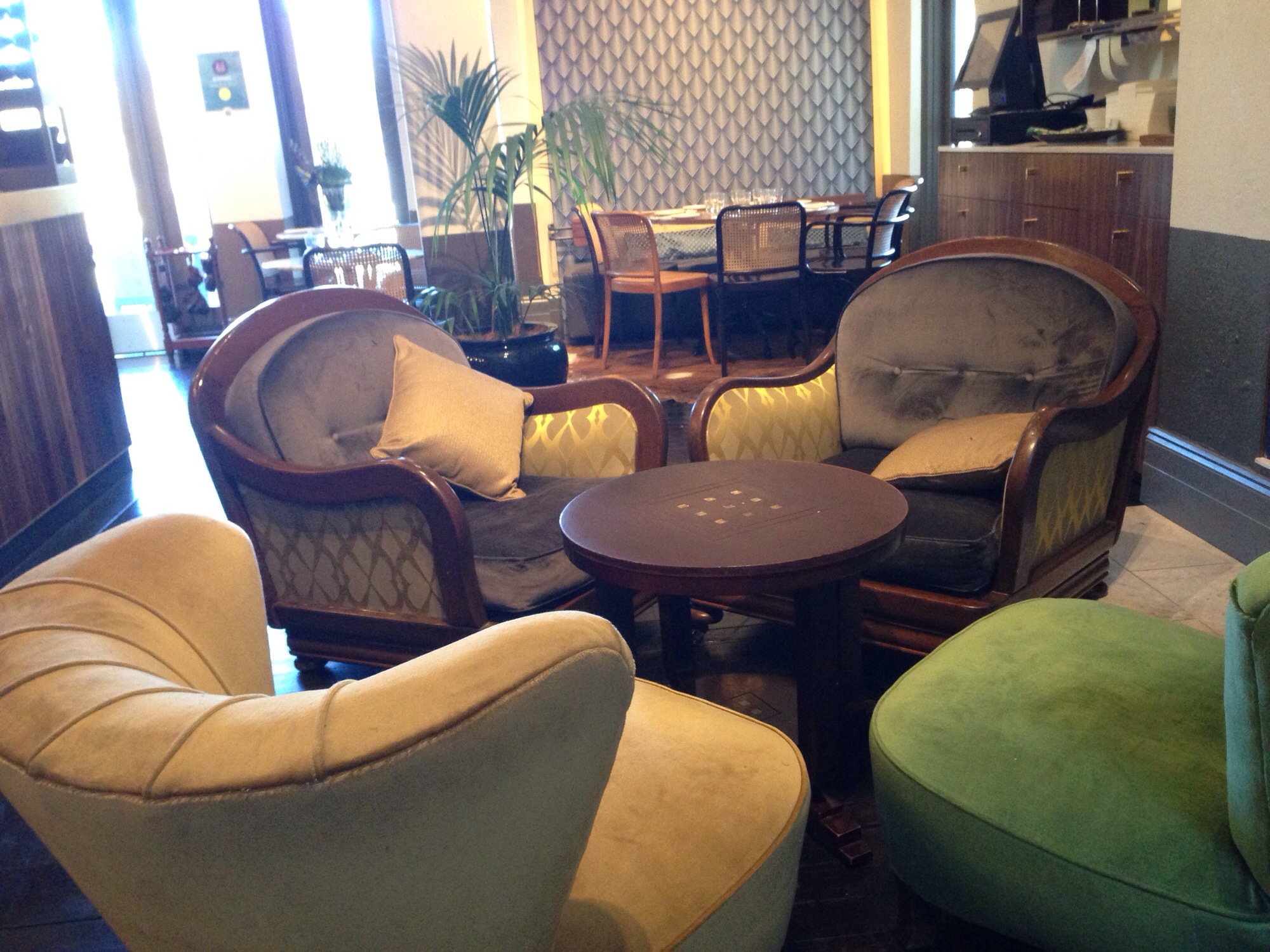 The whole venue was centred around the bar area like a wine room should be. 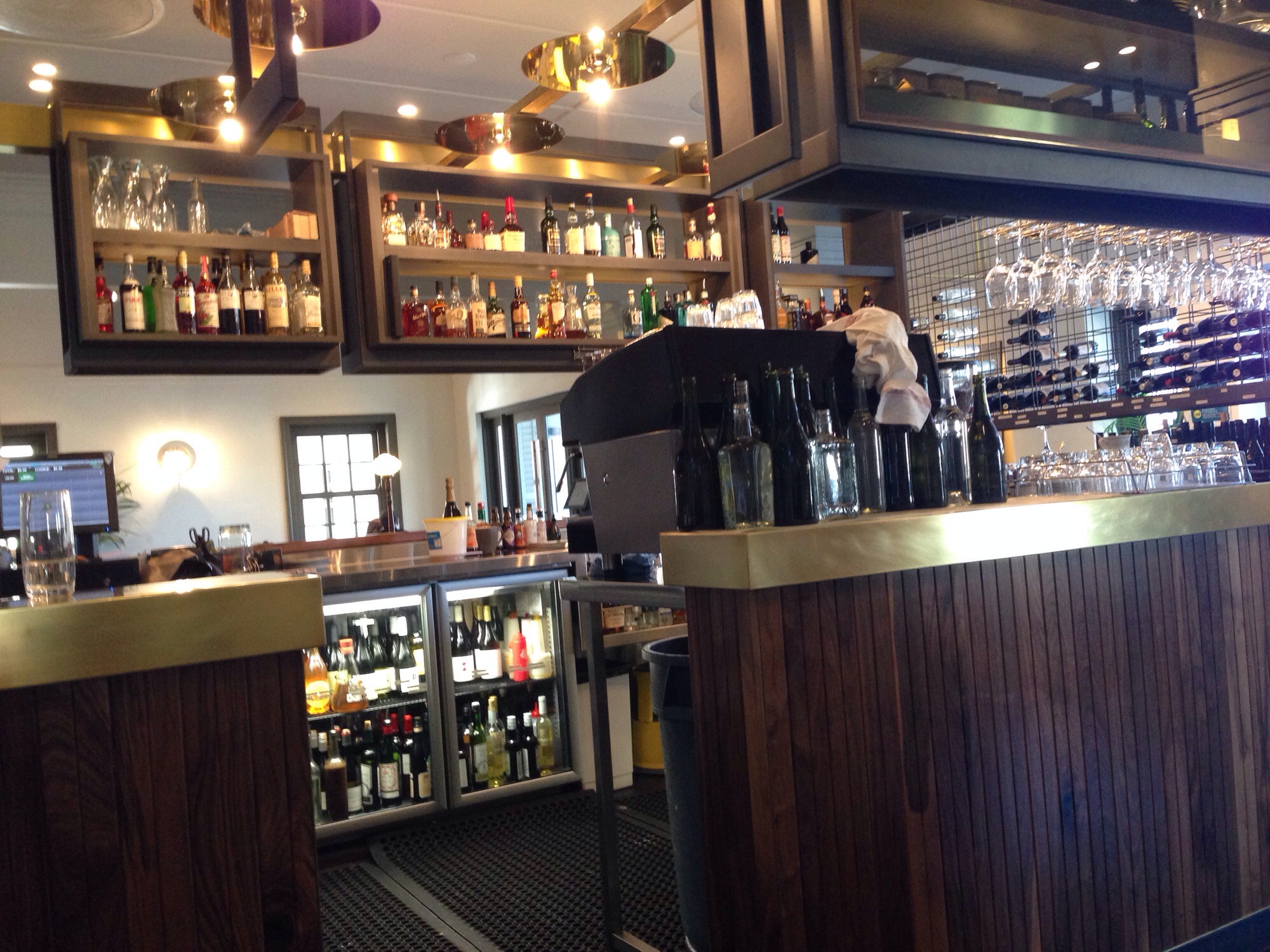 Soup of the day~

Creamy cauliflower ($10.00). My eyes widen when I saw my soup portion. Luckily I had ordered something ‘lighter’ for my main. This soup was unbelievably velvety smooth and full of flavour while the condiments helped add to the texture and salty levels. I could drink this soup all day! Unfortunately it was the soup of the day so who knows when it will come back on the menu, but I look forward to it. In anticipation of more food yet to come, I offered my bread and oil to my friend who happily dipped it amongst her prawns. She really liked the bread and I could only assume it came from A. Baker as it is so close.

The soup was also served with bread and dipping oil.

Prawns, garlic chips, chilli ($17.00). I couldn’t taste much chilli and the prawns were borderline too salty but when paired with the oil and the bread it balanced out. It is sad to only expect four prawns despite paying $17.00 for the dish, but it is what I have come to expect from the pricey New Acton area. 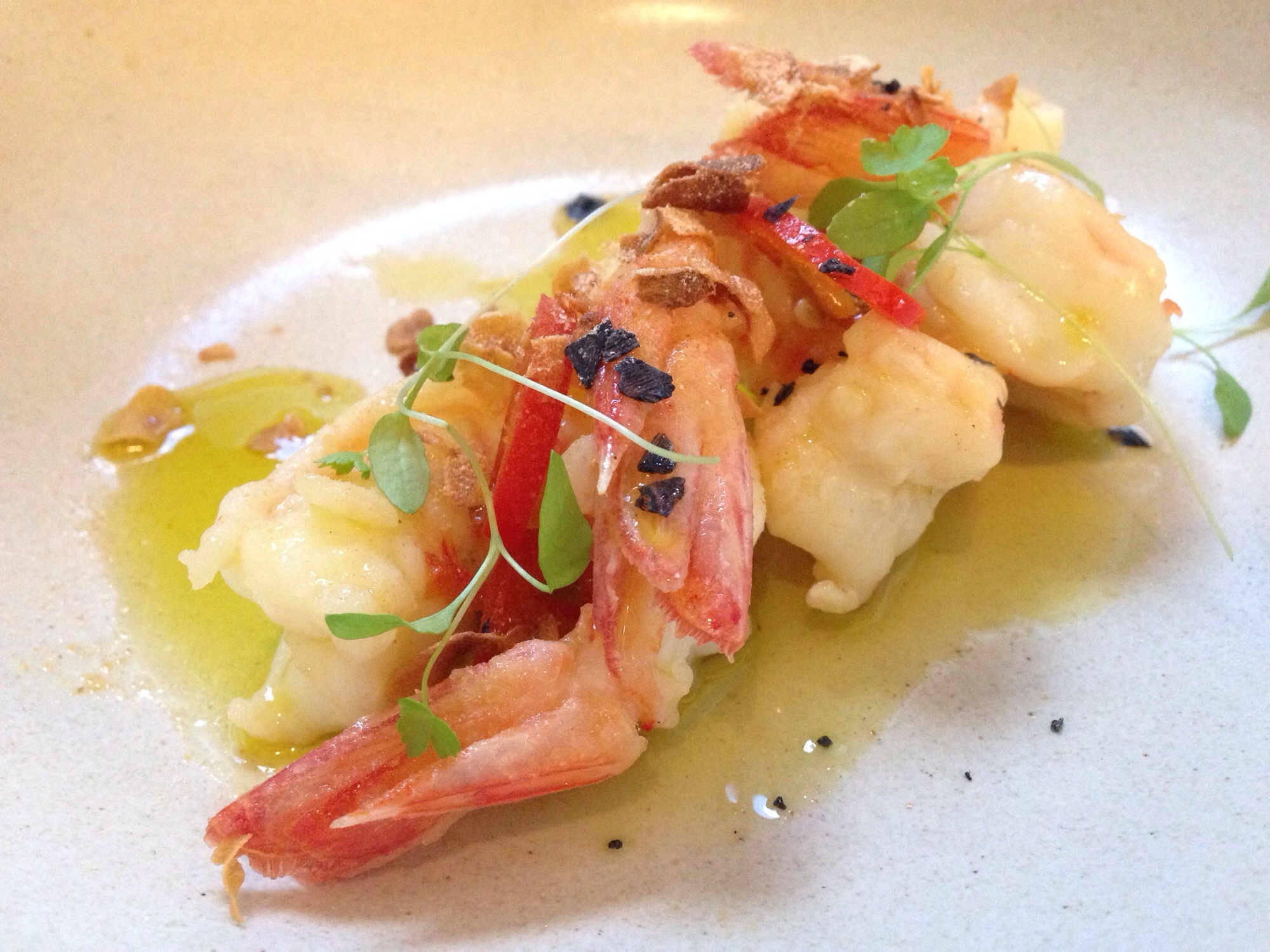 Drinks (house wine or soft drinks): house red and lemon lime bitters. We weren’t told what the house red was but my friend really enjoyed it and said it was heavy and full bodied. 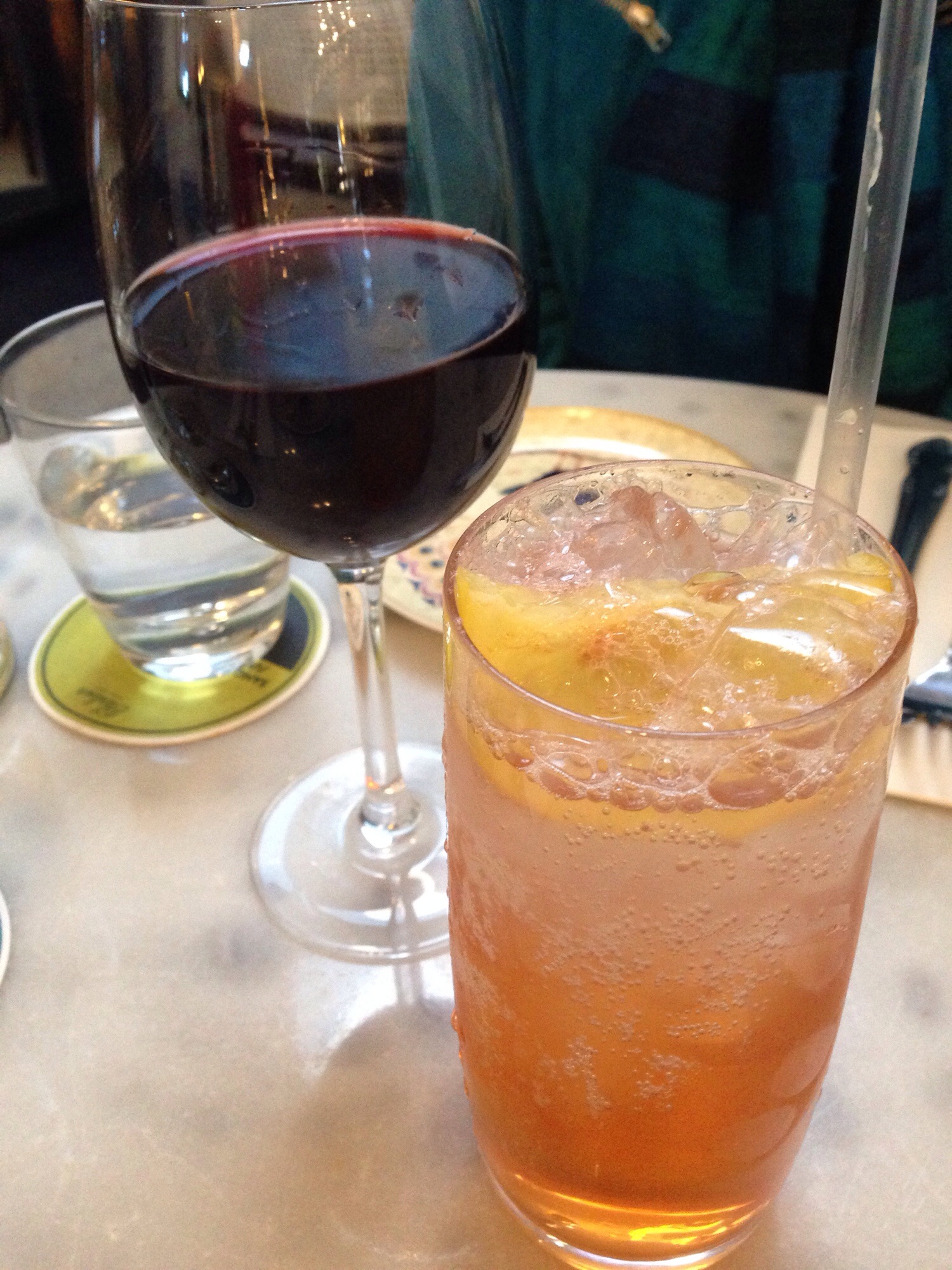 Pappardelle pasta, pork belly, sofrito ($16.00 paired with a drink). The pasta was cooked perfectly with the chunks of pork being really tender in a very rich tomato sauce. It was not an overly large portion and would have been perfectly paired with something sweet, I was almost tempted but I was on a strict time schedule so we couldn’t squeeze it in. Lucky we ordered the extra entrees 😉

Battered calamari, chipotle aioli, pickled cucumber ($16.00 paired with a drink). The salad was nice enough, presented well in a shallow bowl and I also really liked the sauce. The calamari was not stringy and chewy but nicely battered and tender. The salad greens were fresh and crisp but I felt the whole thing was ruined by someone who was a bit vigorous with the paprika. It was everywhere and often the dominating flavour. I tried to shake off as much as I could but it was still there. 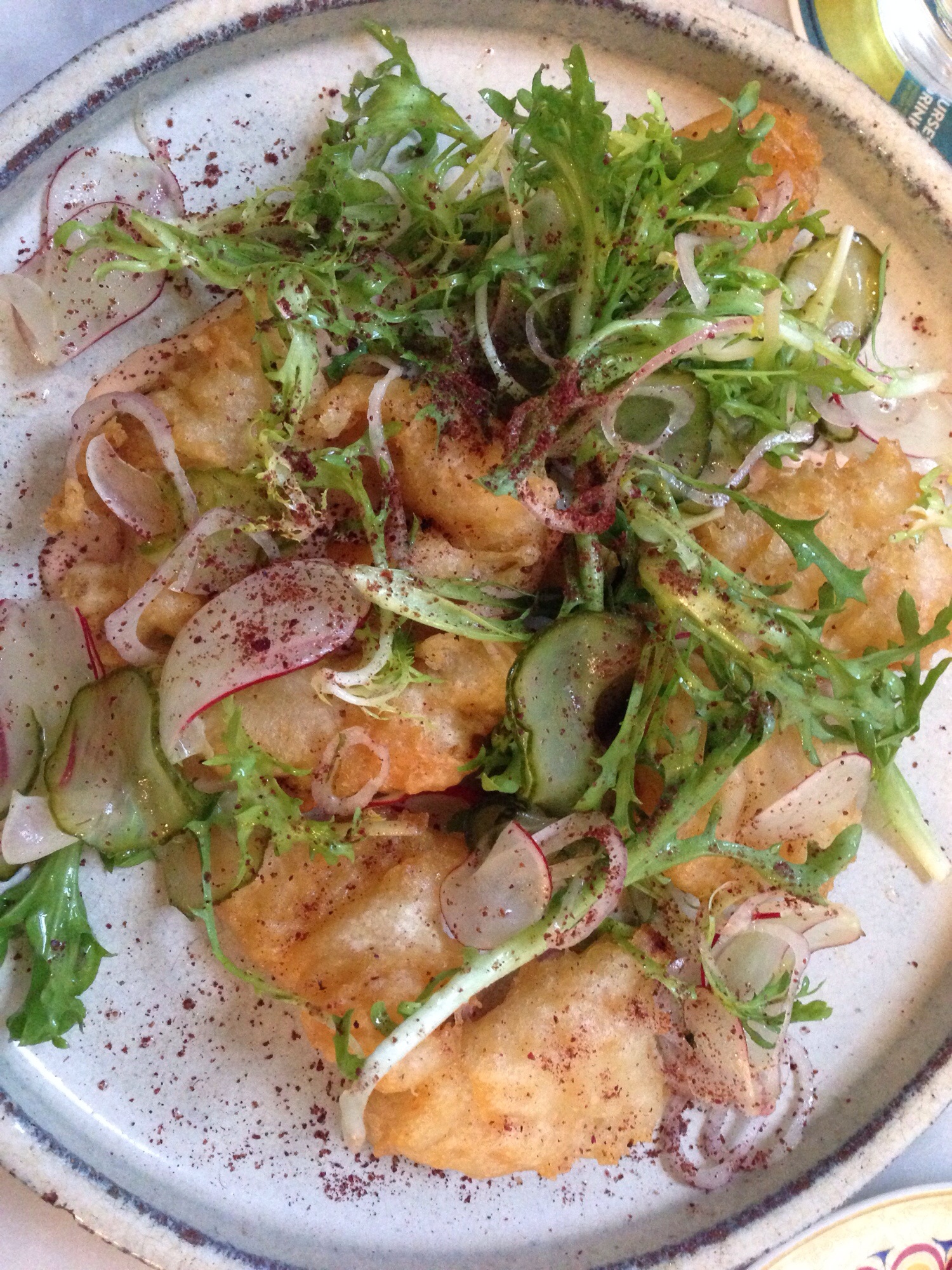 As much as I tried, I couldn’t shake the paprika off my salad.

Despite being busy, I felt that we were well looked after by the staff. I would definitely come back and try more things from the lunch specials, but I probably wouldn’t order the calamari salad again. If anyone sees the cauliflower soup back on the menu, let me know!