In a nutshell, Les bistronomes really disappointed us. Not with the food that we received, that was rather nice, it was because of what was not available from the menu that day.

It was my friend’s birthday and all she wanted was the ‘beef Wellington for two’, she wouldn’t even have cared if she had to eat it all by herself, but between the delay of the convection oven and the huge prep behind the dish, beef Wellington won’t be available til next week. Also by the time we got to dessert, we were informed that they ran out of the creme brulee which had been catching our eye as they went past us all night. NOOOOOOOOOOOOOOOOOO…  >____<

Canberra’s behaviour is so predictable, new restaurants are always busy to see what all the fuss is about. I hope it is good! 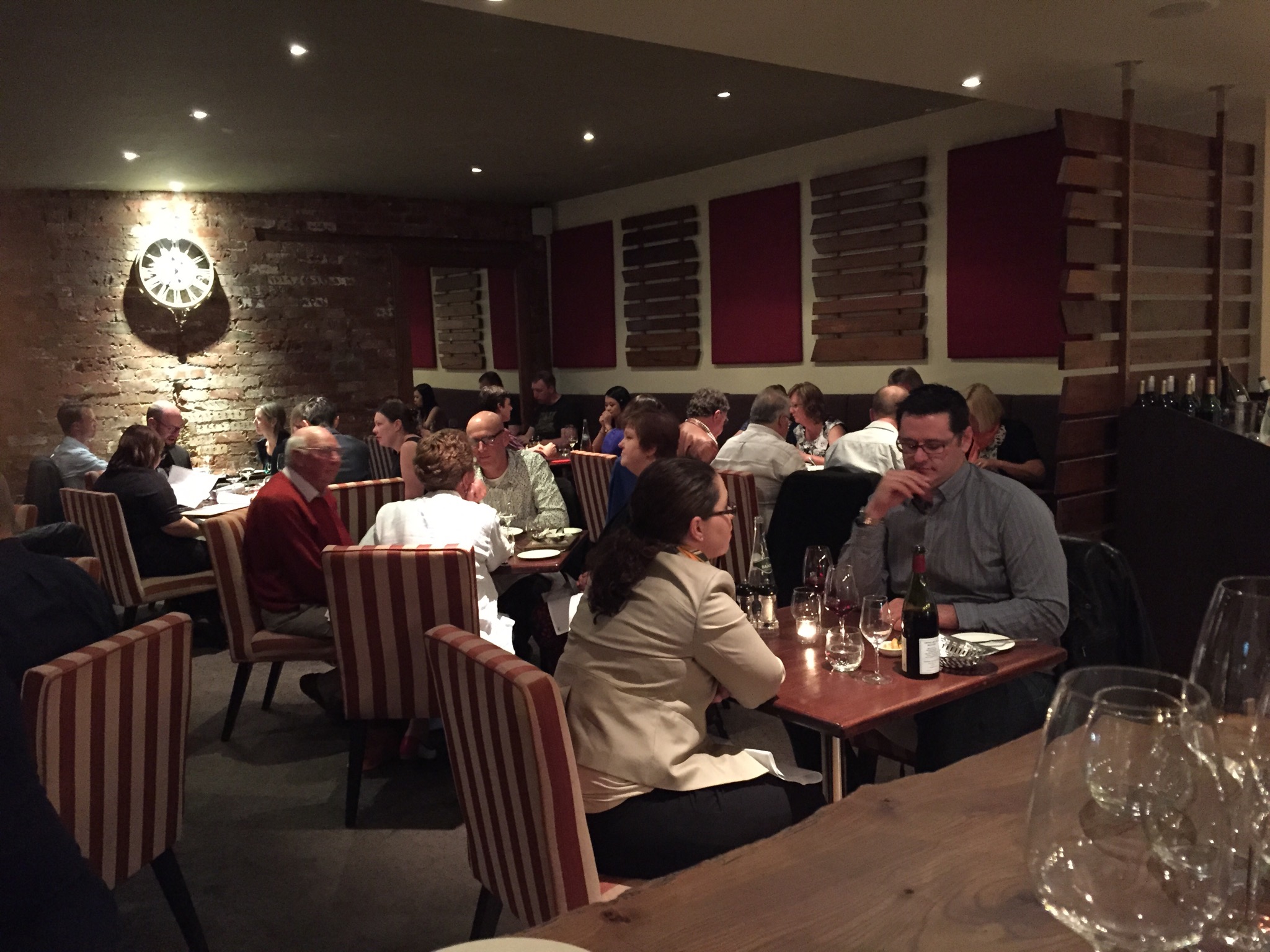 There wasn’t much difference between the interior of Les Bistronomes and the previous Delissio Brasserie but there were a few subtle hints that reminded you of France.

To start we were served with some fresh bread (cold) with a smoked tomato butter. The butter was whipped well but the flavours of the tomato and salt were subtle.

We don’t usually drink but we were here to celebrate so a couple of us got a cocktail that consisted of sparkling wine and grapefruit ($13.00). 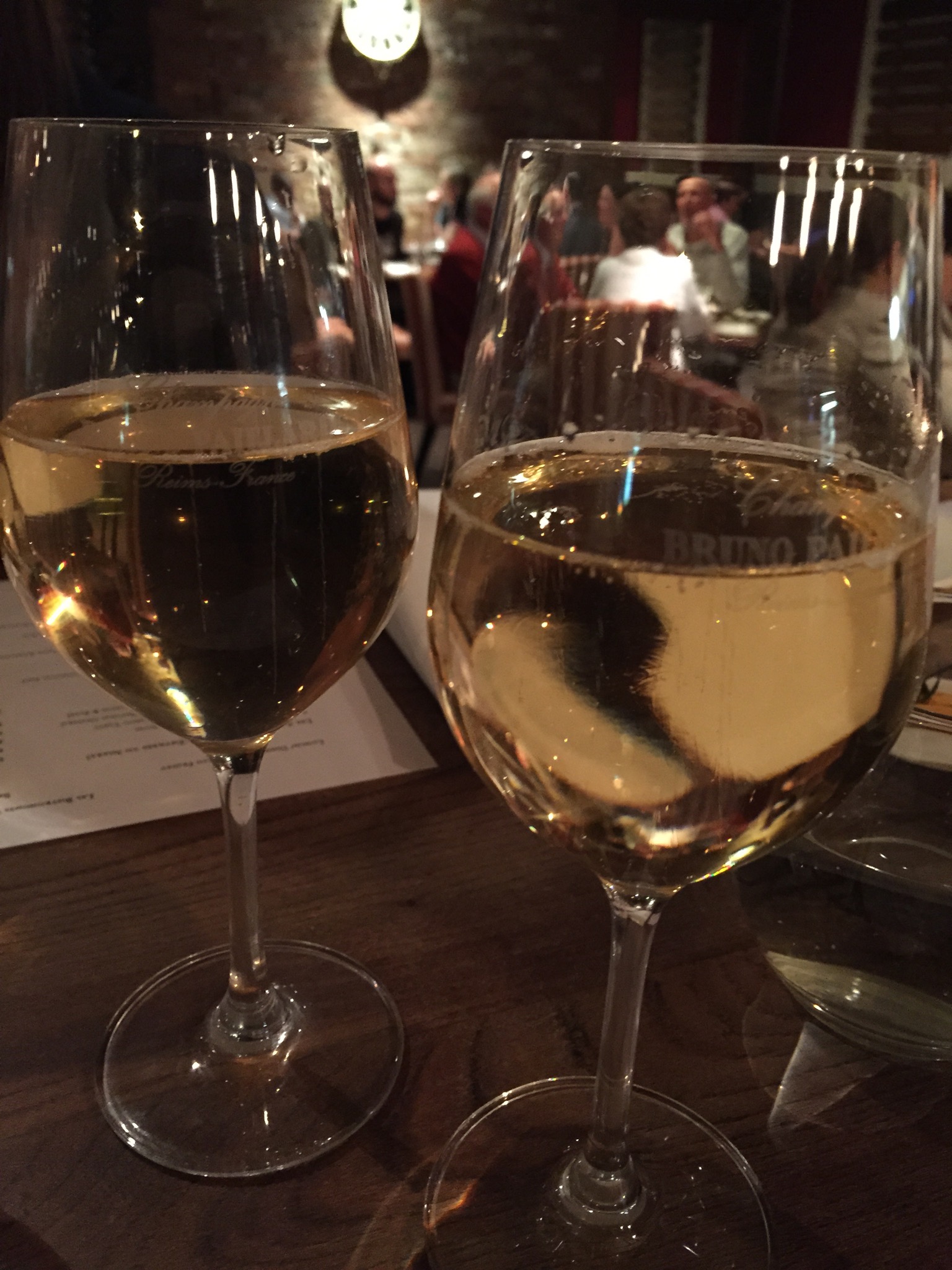 Huitres naturelles sauce mignonette (natural oysters $4.00 each). I haven’t had oysters in a long time and oh how I’ve missed them. The mignonette was interesting and vinegary but the lovely sea salty taste had the last say in my mouth.

Tartare De Boeuf (beef tartare). My Belgian friend was looking forward to this (despite it being her second choice) but when she tasted it she said it wasn’t how she prefers it. I tried a little and my first bite was over powered by parsley. My second bite had a strong bite of hot mustard but lacked the natural flavours of raw meat. We ate it with the hot fries and it gave it a good ‘chaser shot’ of salt. The top crunchy bits are beef tendon crisps. 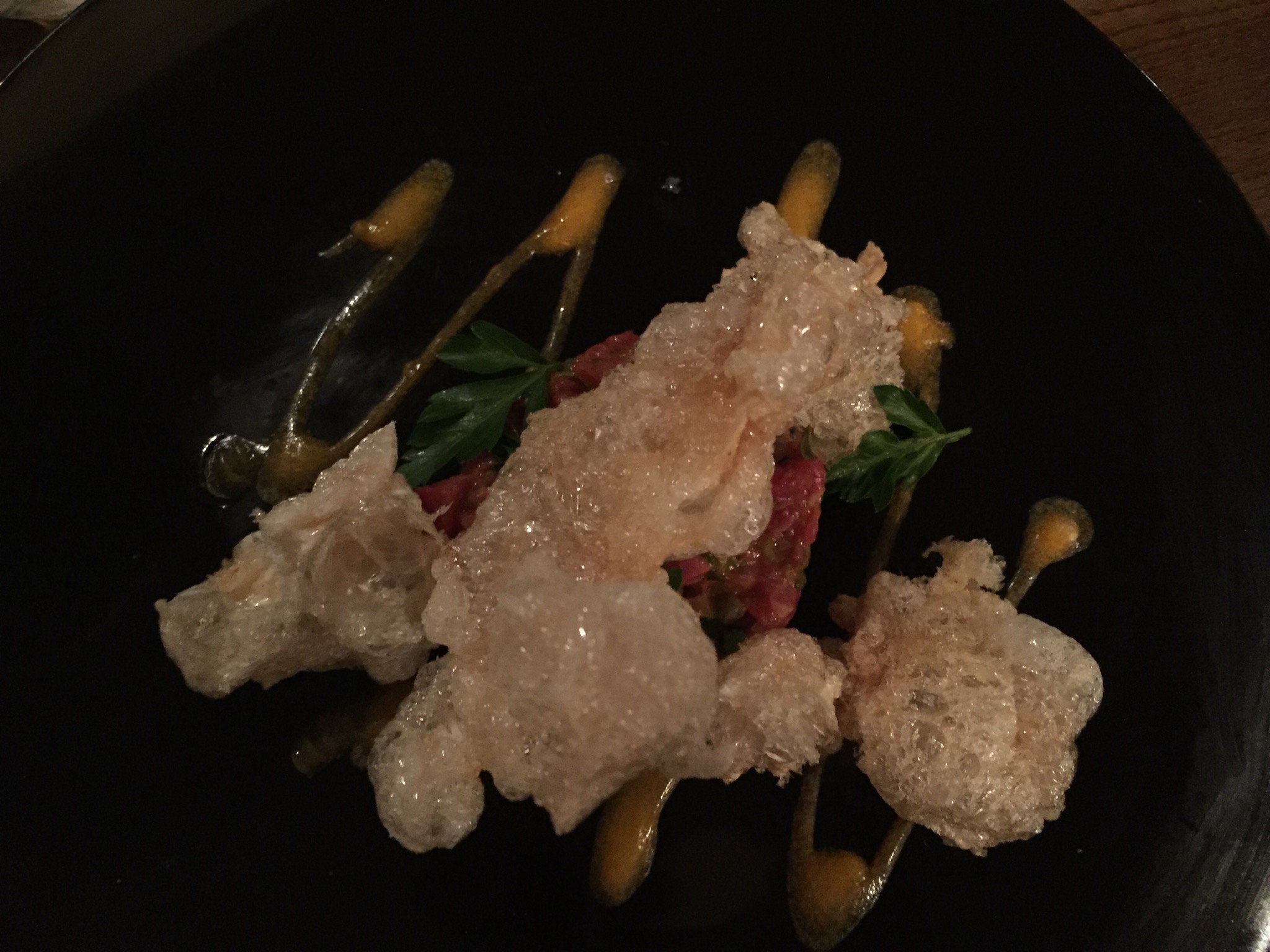 A close up of the beef tartare chopped up into little pieces. 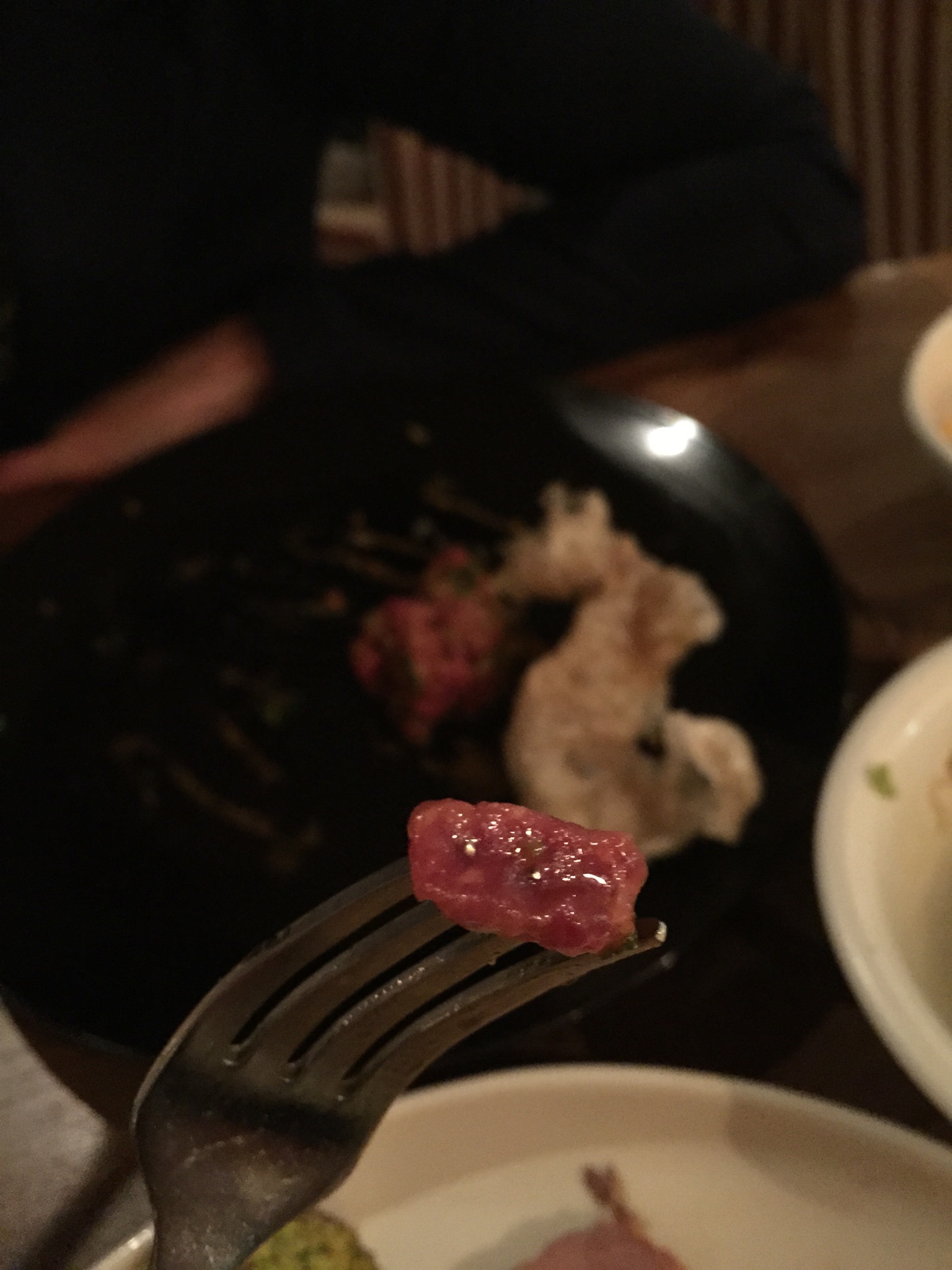 Canard A L’Orange (orange duck, carrot and licorice, pickled red cabbage and pistachio). I loved the duck flavours from the meat but especially from the skin. I wasn’t expecting the terrine but it did add to dish and helped to fill me a little more. The pickled cabbage was crazy sweet but it was addictive and went very well with the duck meat. The orange sauce wasn’t anywhere near as strong as the pickled red cabbage, but the orange segments were a happy surprise. There was only a line of licorice so if you don’t like the flavour, don’t let it stop you from ordering this dish, but I really enjoyed it. 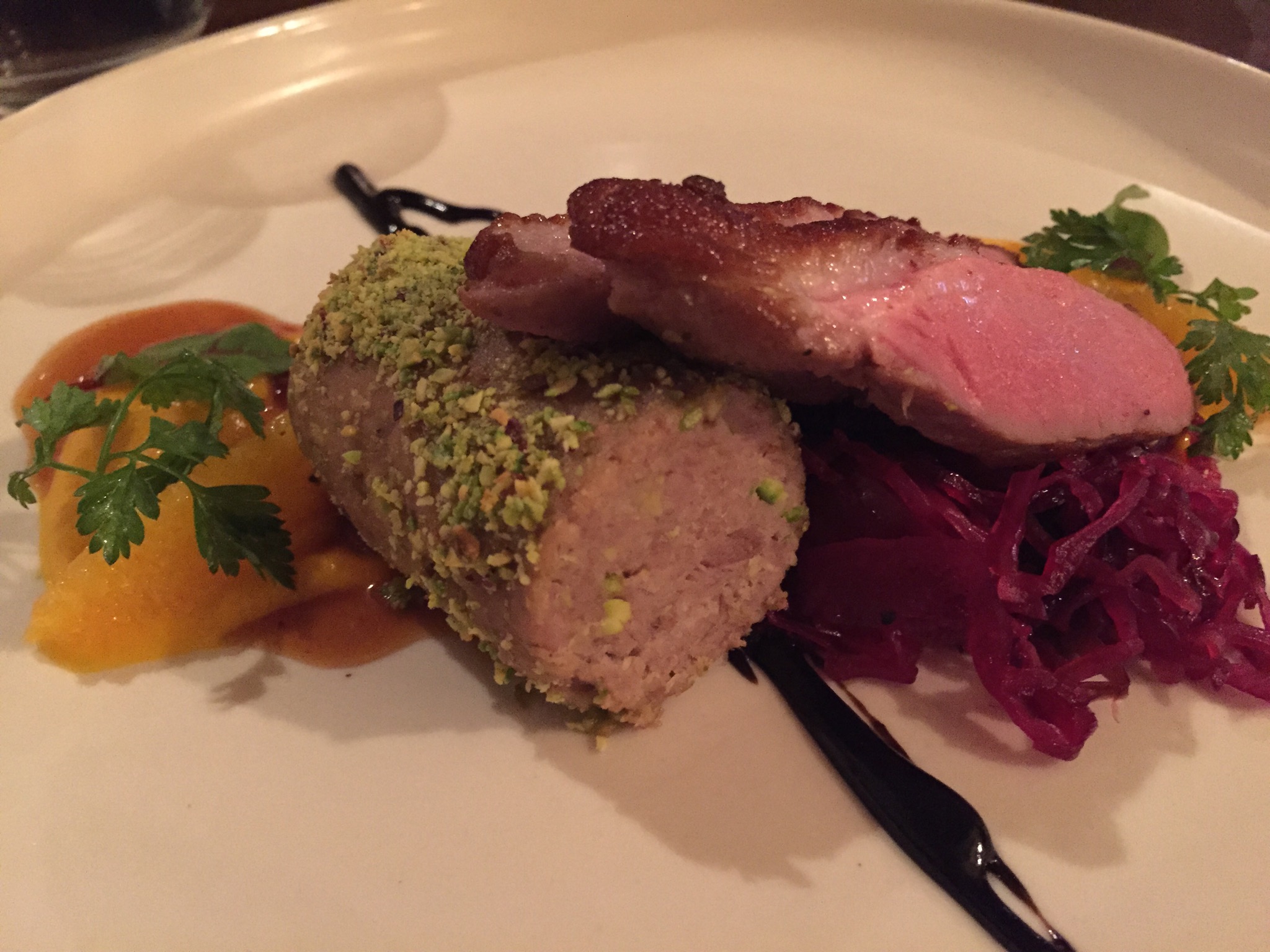 Mmmm check out that duck skin.

Le Poisson Du Jour (fish of the day) Salmon confit with broccoli, mussel and shrimp bisque. I loved the flavours of the bisque, the flavour was strong yet the texture was very light. Inside the Brussels sprout leaf enclosed something eggy (?) and tasted very lemony and very good. The salmon was really delicate and I was impressed at the size of it. 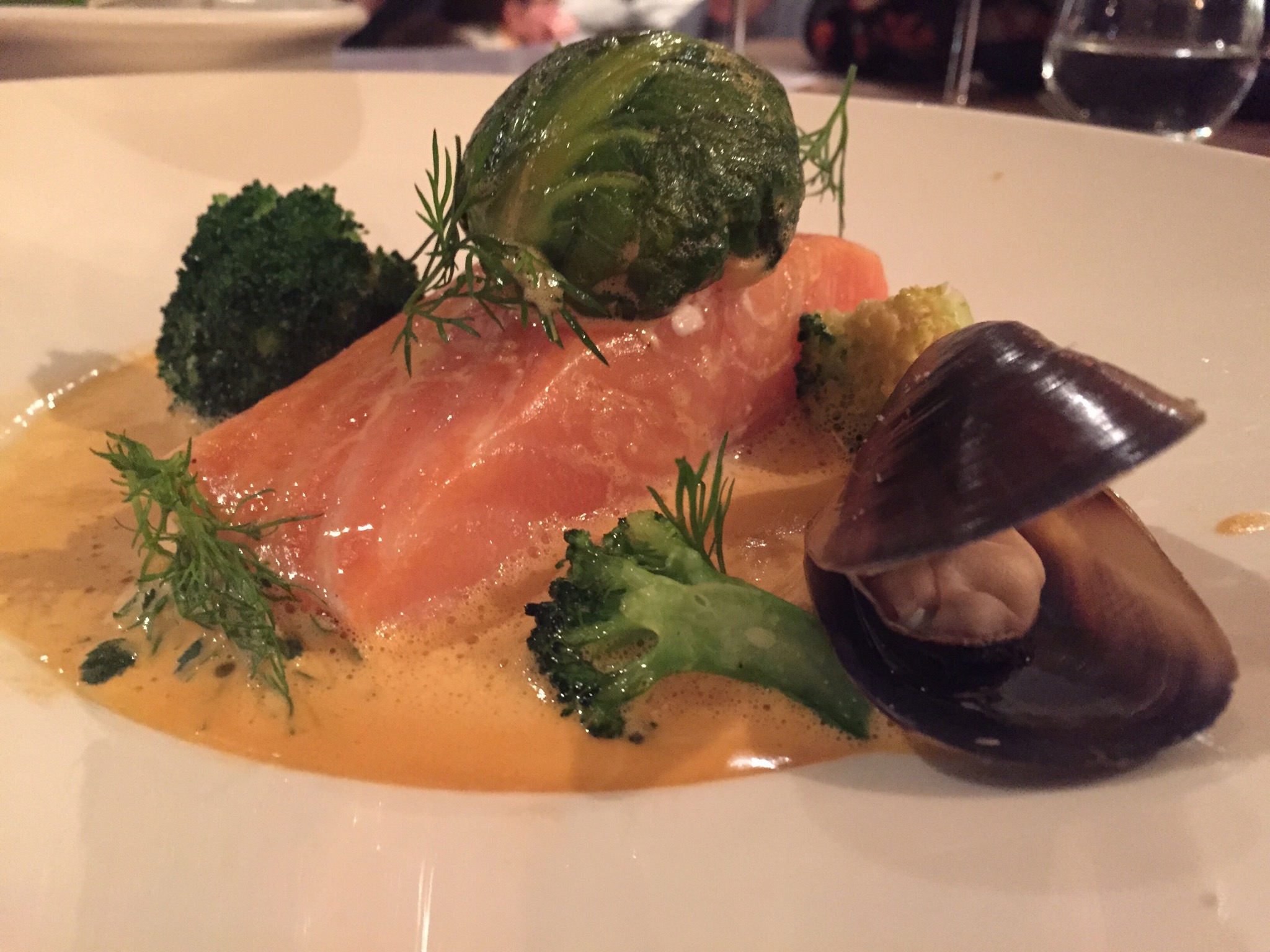 Frites (chips- just checked the bill, we were only charged $8). We had to ask several times for this but when they finally arrived they were super hot and well salted. Seems really weird to pay this much for a bowl of chips but at least it was a decent size. 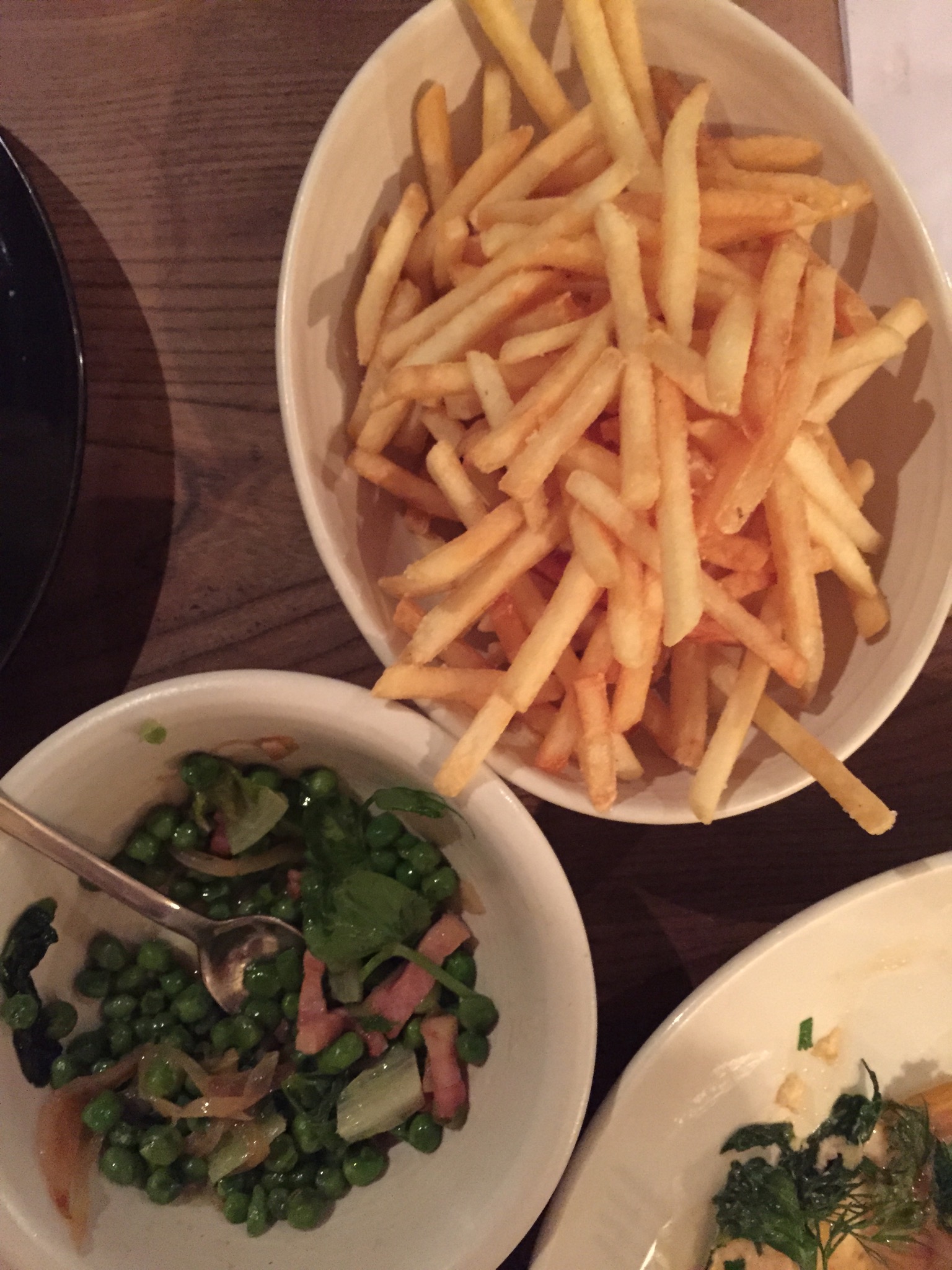 Petit Pois A La Francaise (French peas). I really loved the soft onion with thick chunks of bacon. I am not a fan of peas but I think that night I ate more peas than all of my 29 years put together. It was recommended that this was a good side for my duck main dish.

We got talking with a waiter to suss out why beef Wellington weren’t available, why they were on the menu and more importantly, when would they be available! He explained that the chef had previously worked with Gordon Ramsay which inspired him to put it on the menu and that the beef Wellington will be available next week. He found out that it was a big reason why we came and that it was my friend’s birthday. He was very generous and came back later to give us all very large serves of a gorgeous dessert wine complimentary to make up for our disappointment.

Mousse Au Chocolat Et Avocat (chocolate mousse and avocado).The textures varied between the light mousse, the delicate crispy cigar casing, avocado gel and the honeycomb chunks. Avocado and chocolate might seem like an odd mix, but it isn’t too rich and after eating the chocolate, the avocado seems to take on a subtle green apple flavour.

What’s a French restaurant without some fromage, unfortunately we had to go but I would like to try it next time we are here.

The staff were attentive, lovely to listen to (what a lovely accent) but from time to time it did get hard to decipher what they were saying, especially if they were speaking fast.

It is fair to say that we will be back to eat everything we couldn’t order from our first trip. It is a little on the expensive for small portions but maybe that’s why French Women Don’t Get Fat.