I’m sore and tired all over from unpacking at work, I got my rejection from The Fat duck and the Walking dead episode wasn’t that thrilling.
But at least it can only get better right?

I was @harryhartogs the other day looking for a present and this giant tea bag made me giggle. Of course I bought it.
#harryhartogs #cbr #Canberra #tea #teabag 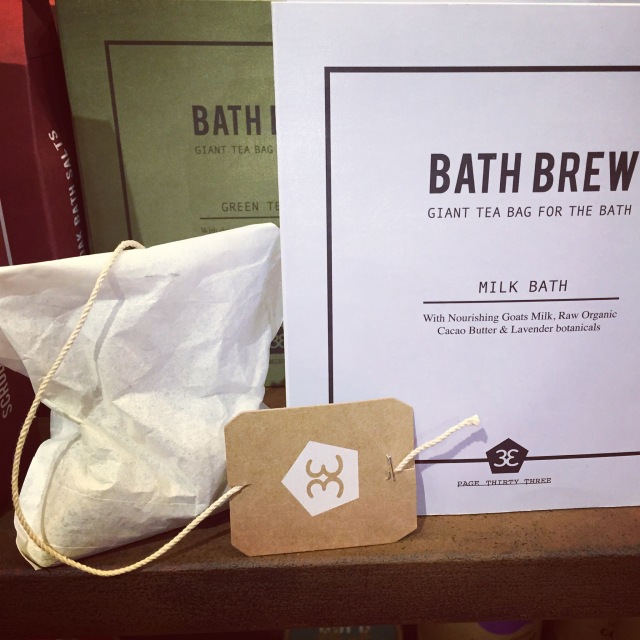 For TimmyC’s big 30th birthday, we wanted to have breakfast together before work. He suggested to take me to a place in Woden and said ‘I bet you have never been to before’. I must say I don’t explore Woden much outside of the mall, so I wasn’t surprised when I had never heard of or been to Urban Bean Espresso Bar. Despite being tucked away between buildings, it obviously isn’t a hidden secret as the line for take away coffee was extremely long when we arrived. 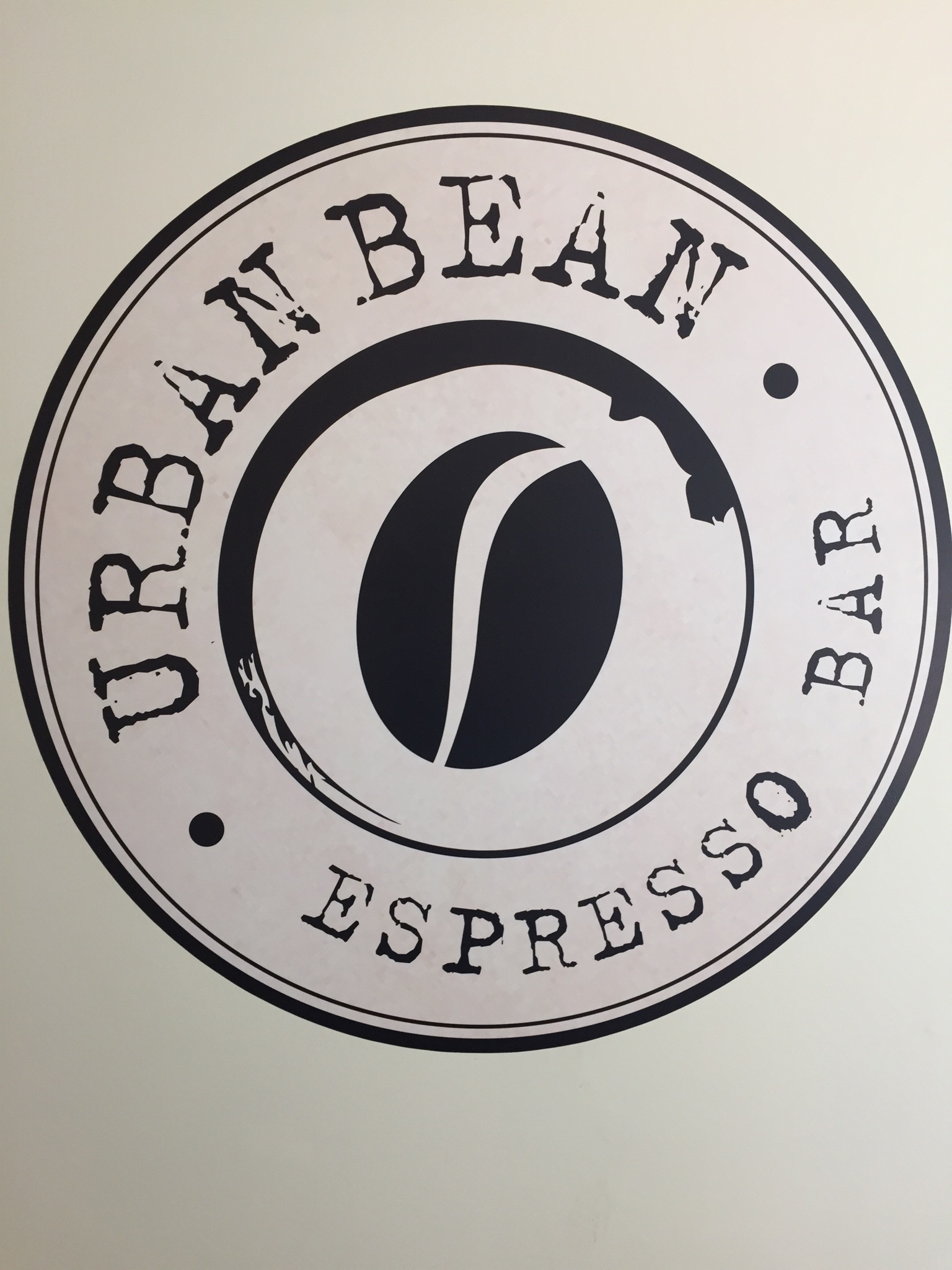 The coffee line died down a little by the time we ordered and grabbed some water for the table. 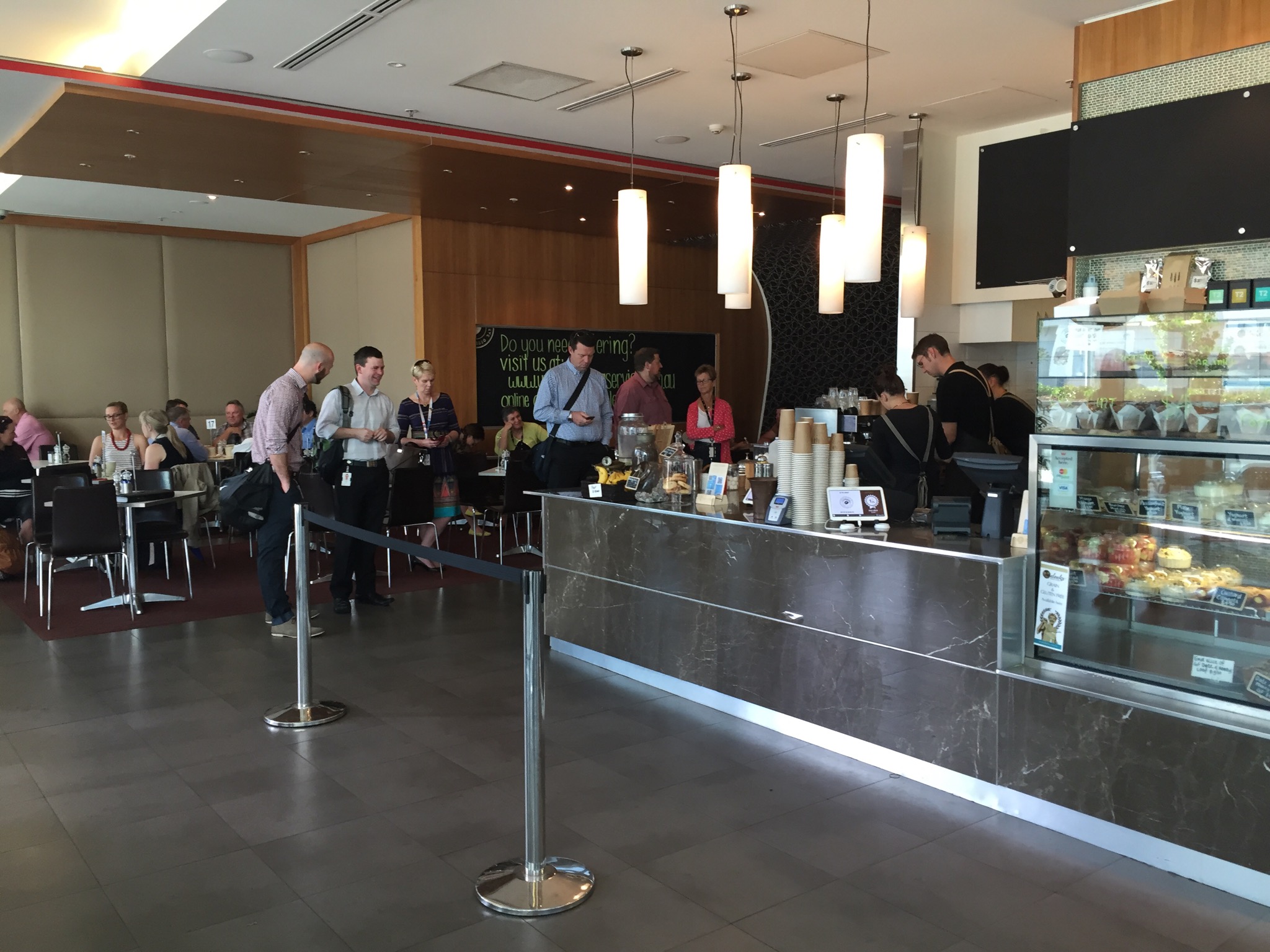 A nice clean lay out with plenty of things on the menu to choose from. 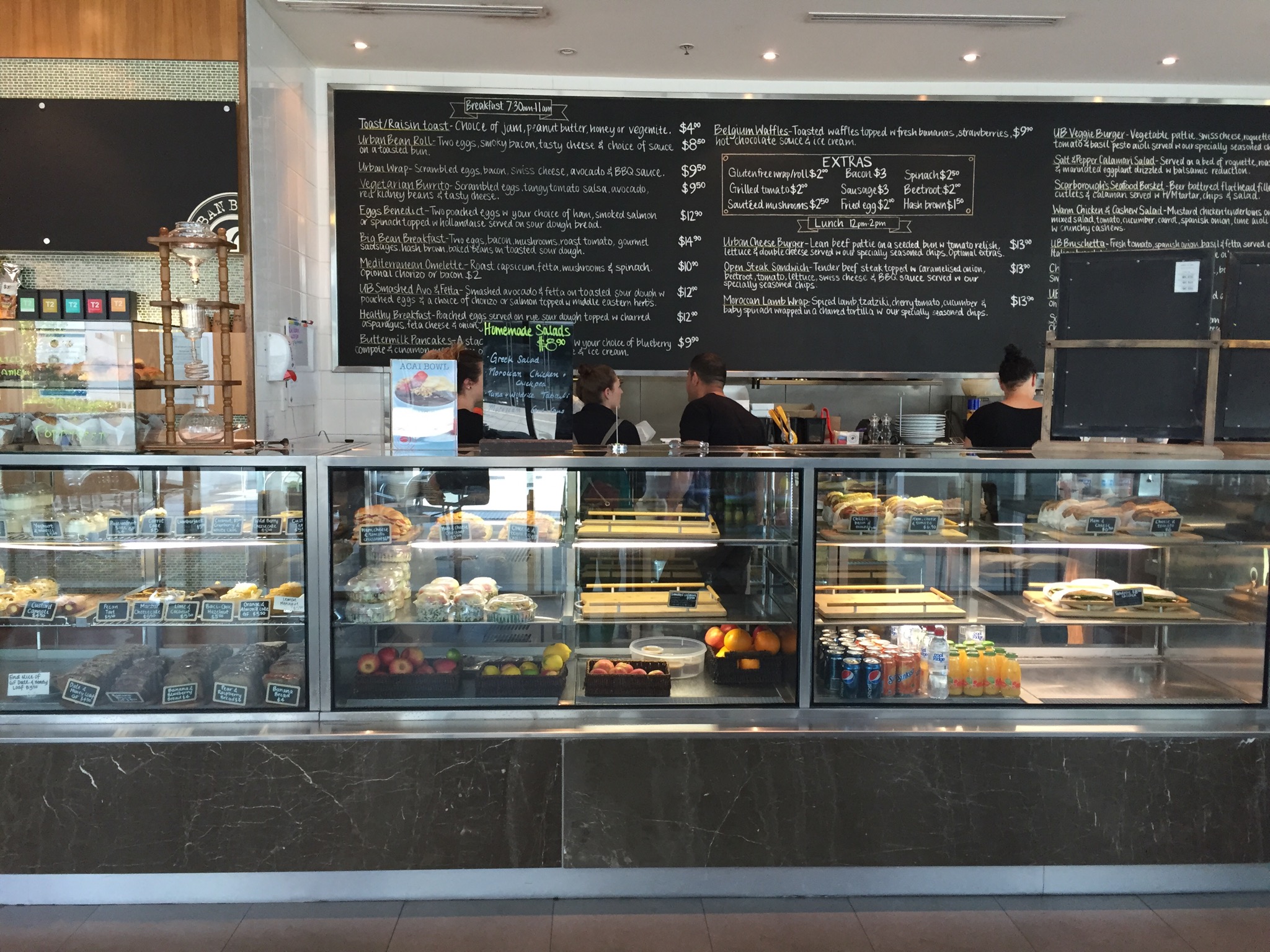 UB smashed avo and fetta smashed avocado and fetta on toasted sour dough with poached eggs and a choice of chorizo or salmon topped with middle eastern herbs ($12.00). Of course I chose the chorizo, it was only half a sausage but I liked how they pan-fried it and gave it a crispy edge. The eggs were cooked well and we were left with a gooey yolk centre while sour dough was a little hard to cut and chew and I couldn’t really taste the saltiness of the fetta. It wasn’t the world’s best breakfast but it was a mediocre savoury option for a reasonable price.

My breakfast looked like a smiley face with crazy eyes. 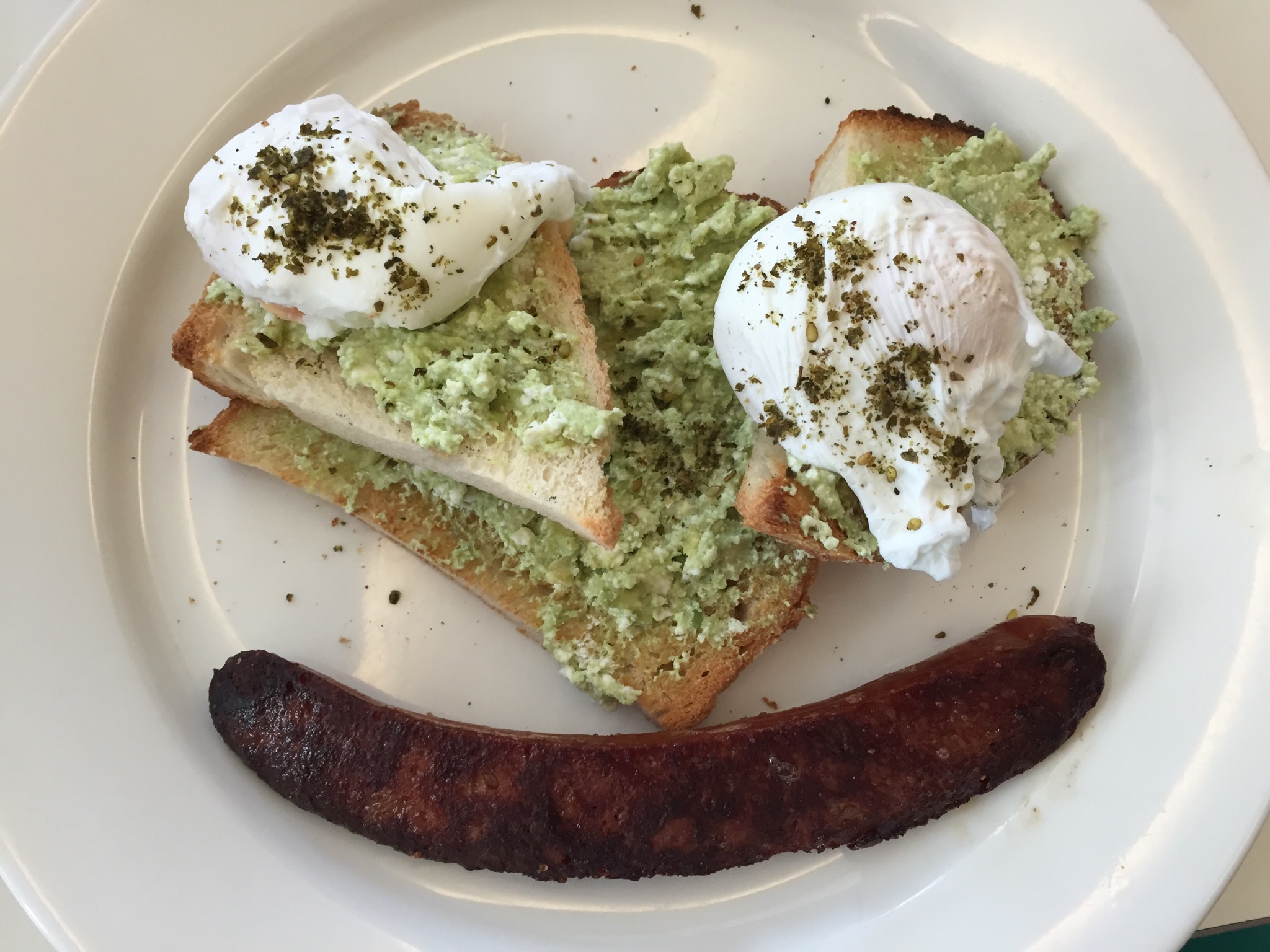 Mmmm check out that chorizo. 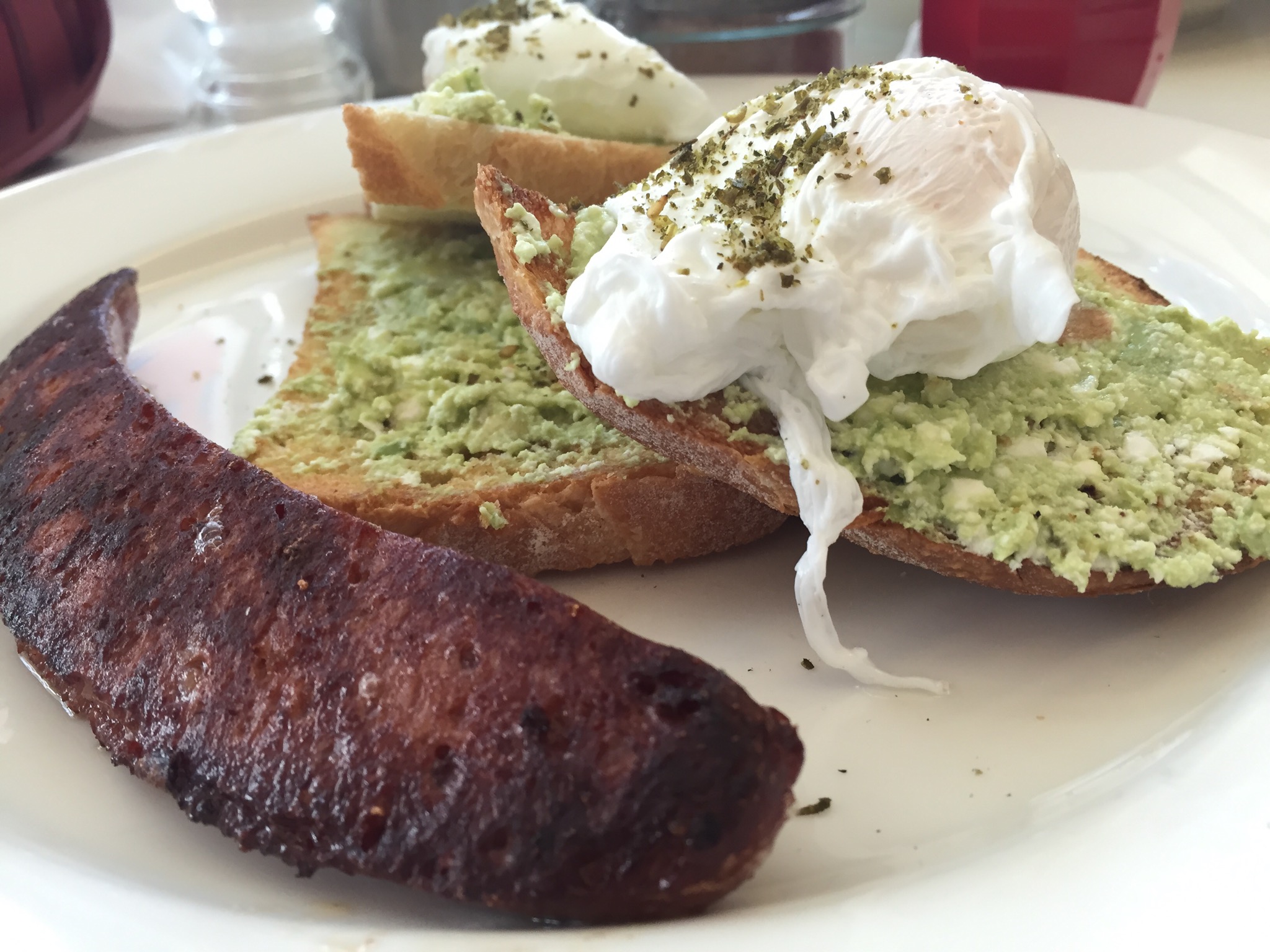 Belgium waffles toasted waffles topped with fresh bananas, strawberries, hot chocolate sauce and ice cream. ($9.90). We swapped out the hot chocolate sauce for maple syrup, but TimmyC looked a little disappointed when what look like ‘pre-made store bought hard waffles’ that were warmed were placed in front of him. They forgot the fresh banana also but he didn’t want me to inform the staff that they ruined his birthday. 😛 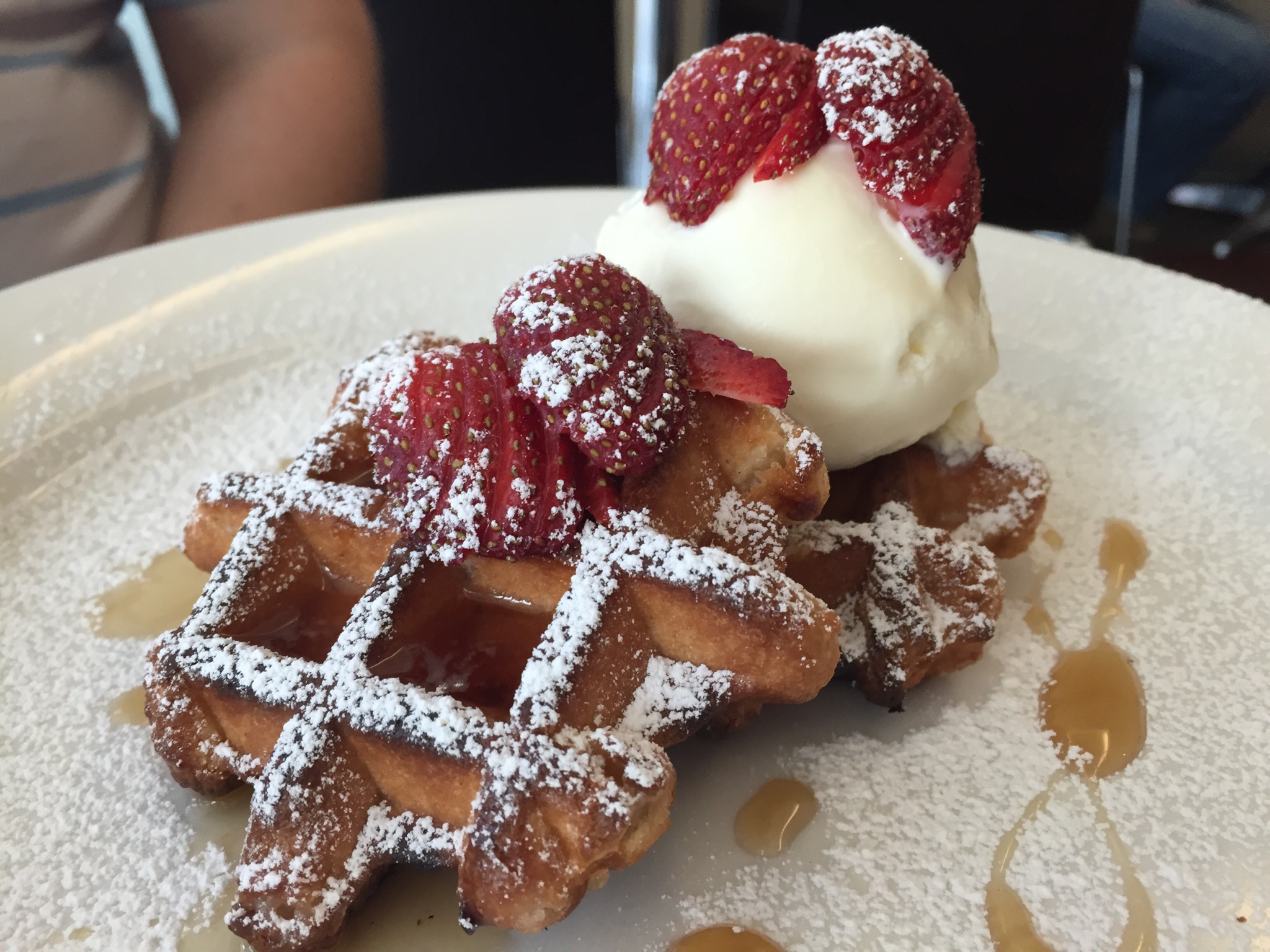 The two waffles were very little, no wonder it was less than 10 bucks. 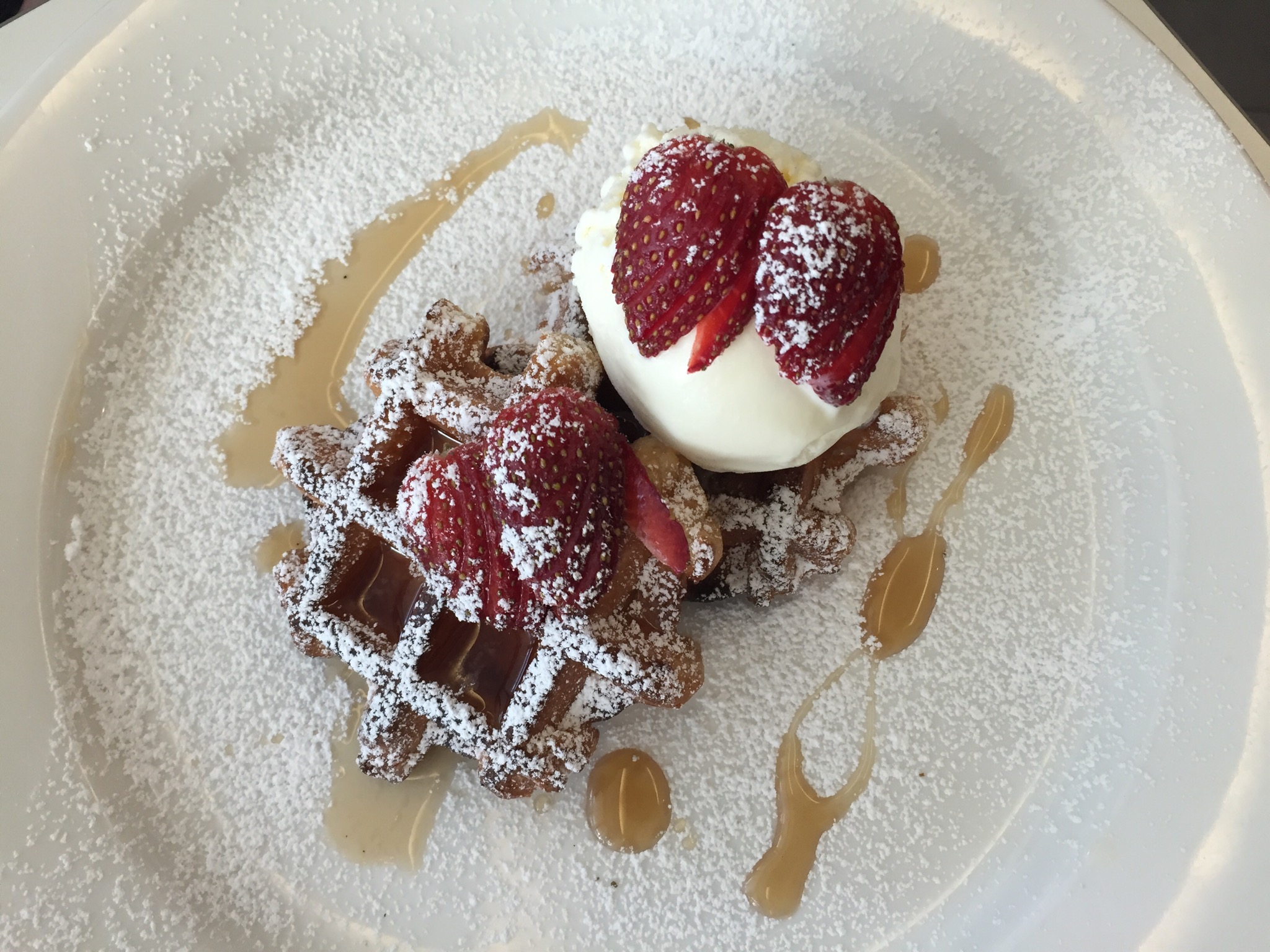 Large flat white. The coffee took the longest to come and arrived after all the food, it was understandable with the long coffee line but it was still annoying. They use ONA coffee beans here which have been very popular with Canberra locals, I can see why everyone comes from neighbouring buildings to get their coffee here. 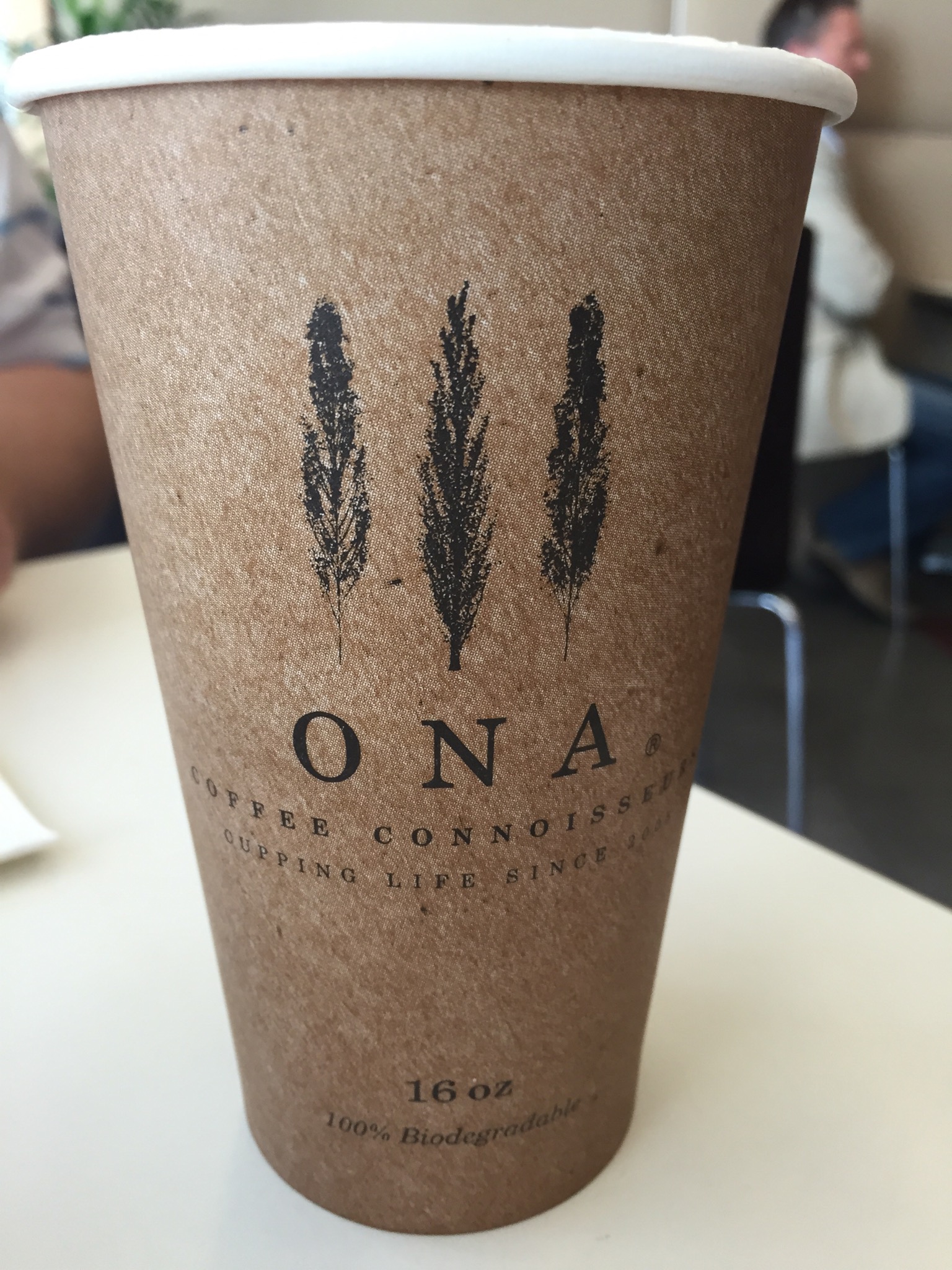 Custard cronut ($5.00). It wasn’t oily and had good pastry layers, although it was a bit too tall to comfortably eat in a mouth full. The custard  balanced out all the sweetness from the icing and sugary exterior. I asked if they were made on site and the waitress said yes but her facial expressions conveyed that she was not all that sure. 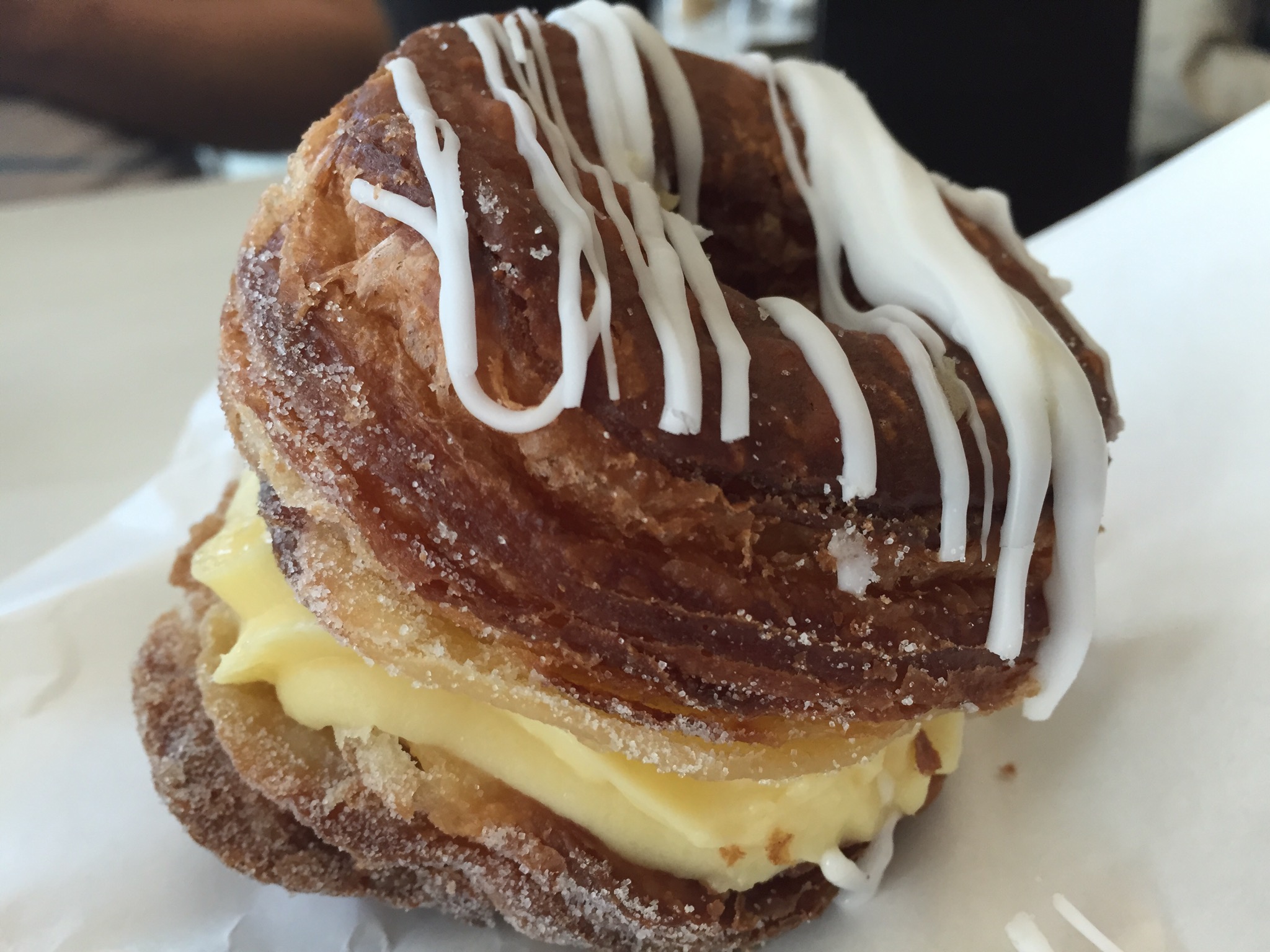 It was a little harder to hold after the first bite, after that, things got messy. 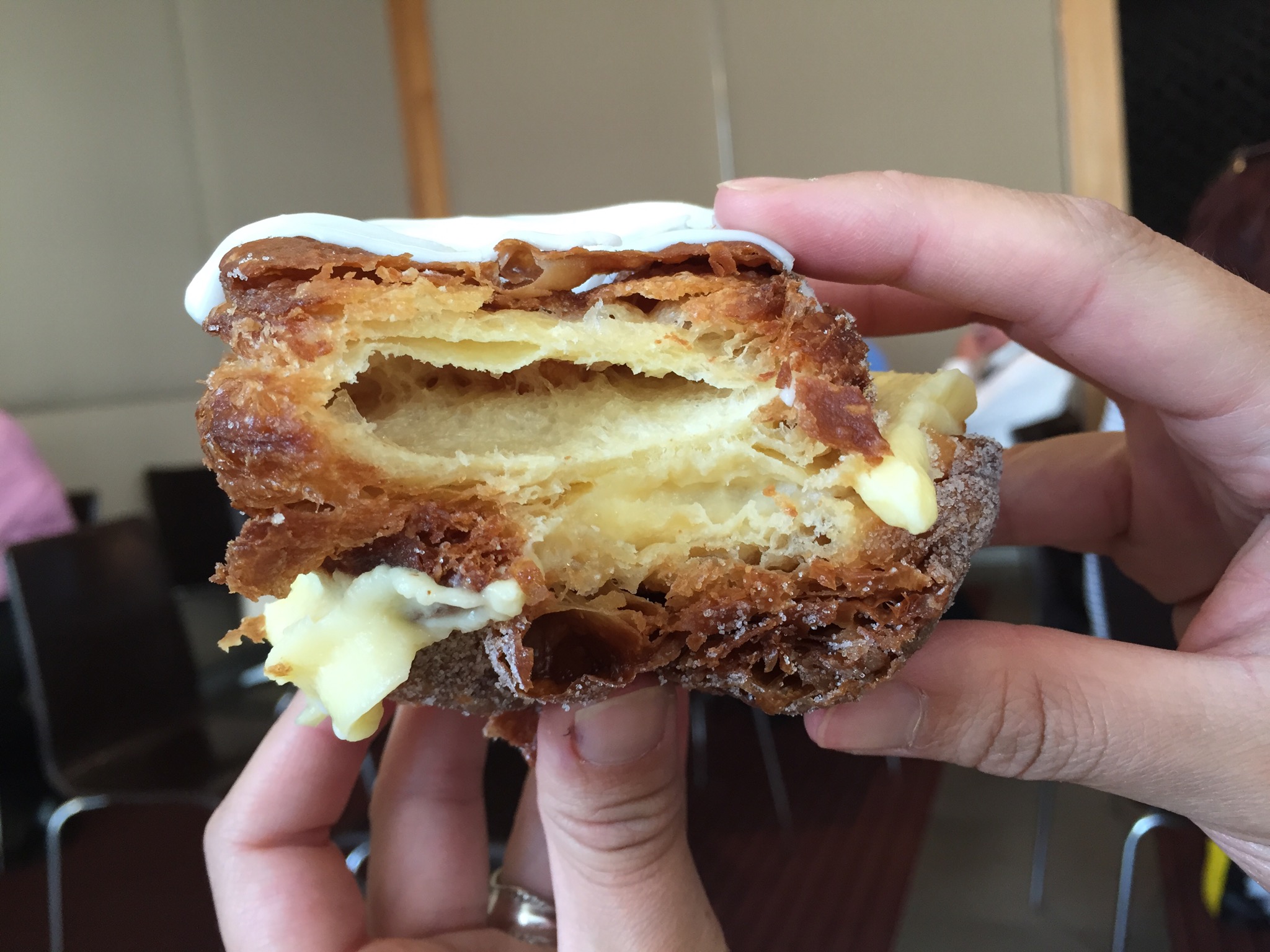 The wait wasn’t too long despite being in the middle of the morning coffee rush. The food is not the greatest but it is reasonably priced but I hear this is definitely where you go for good coffee.