People have always asked me where to find a good steak in Canberra but unfortunately I’ve had more disappointments than recommendations. Finally I can let people know, if you want a good steak, go to Chifley’s in Hotel Kurrajong.

We were greeted at the door of the hotel and asked if we had a reservation before being led into the restaurant and to our table.

The dining room is separated into three areas, we were initially seated with a lot of the other patrons near the entrance but we asked to be moved to another table for better lighting and seating. I found towards the end of the night that the initial section almost looked like people were sitting in the dark, I’m glad that we moved.

Complimentary and butter. It was a delicious sour dough bread accompanied by the cutest serves of pepe saya butter that I’ve ever seen.

Master Kobe Flank Beef Carpacio fried liliput capers, pecorino sardo, salsa verde ($15.00). The beef took a back seat in terms of flavours in comparison to the other elements of the dish. I’m not usually a fan of capers but these fried liliput capers had an amazing crunchy texture which were bursting with flavour and not too salty. The amazing flavours for me came from the beautiful olive oil that they used, I even had to ask what it was because I loved it so much (they said it was Morello by the way).

Seared Hervey Bay scallops shaved iberico de bellota paletila, jerusalem artichoke crisps, spring pea puree ($19.00). The flavours were really nice and there was a nice crunch to the crisps, I just didn’t think that the scallops had enough seared texture to them but TimmyC really liked this dish. 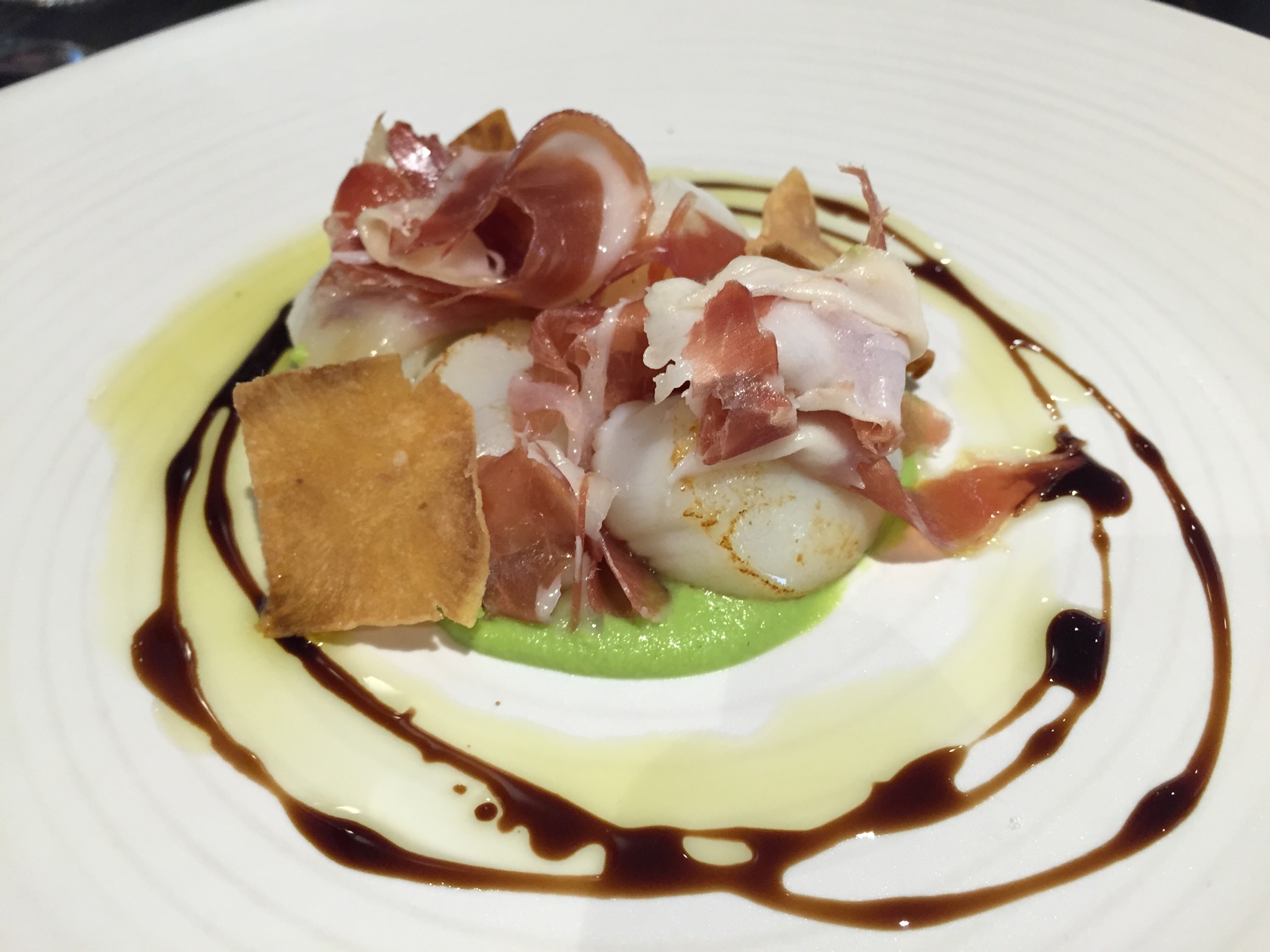 All steaks are served with a celeriac puree and your choice of sauce. 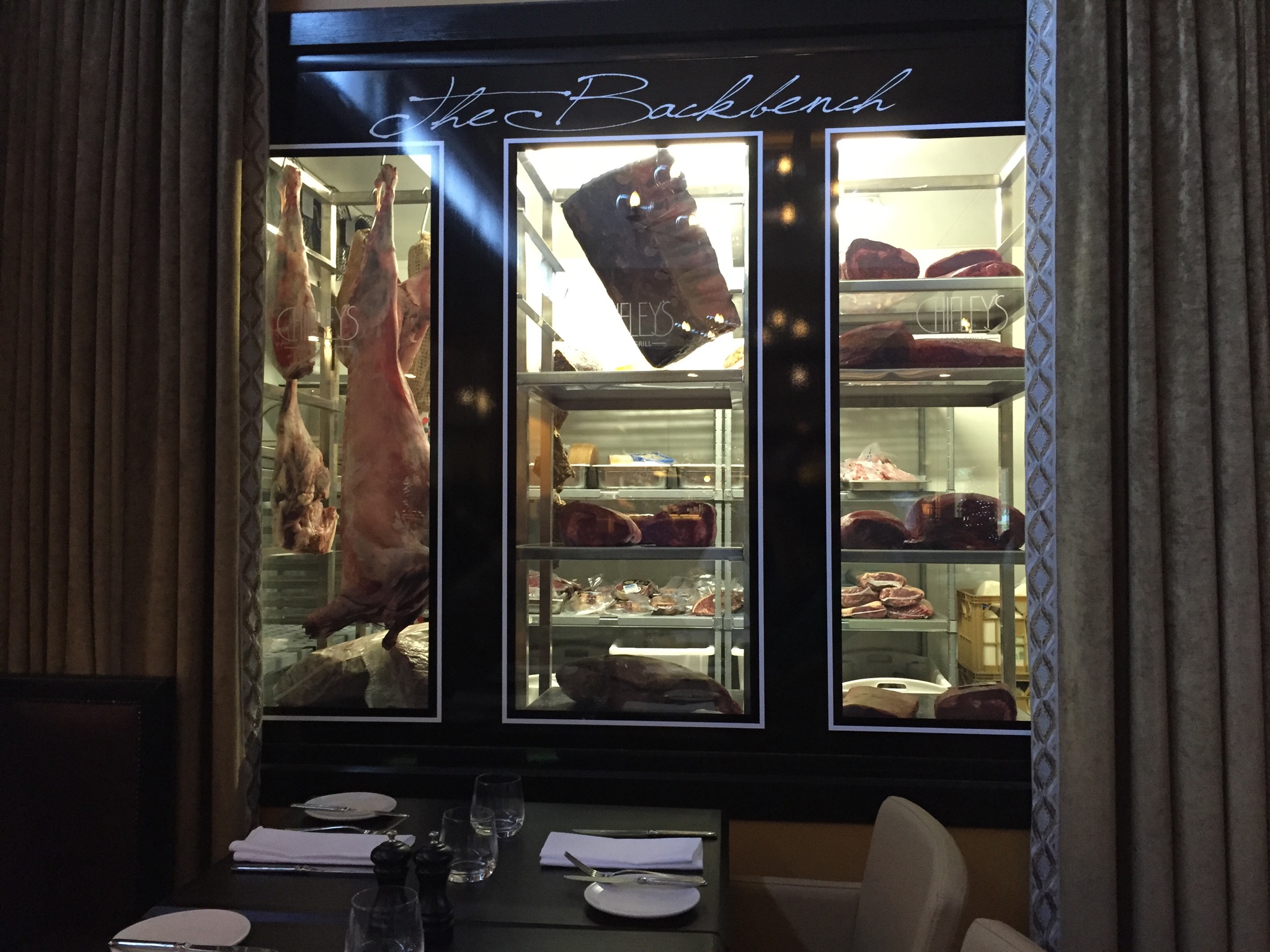 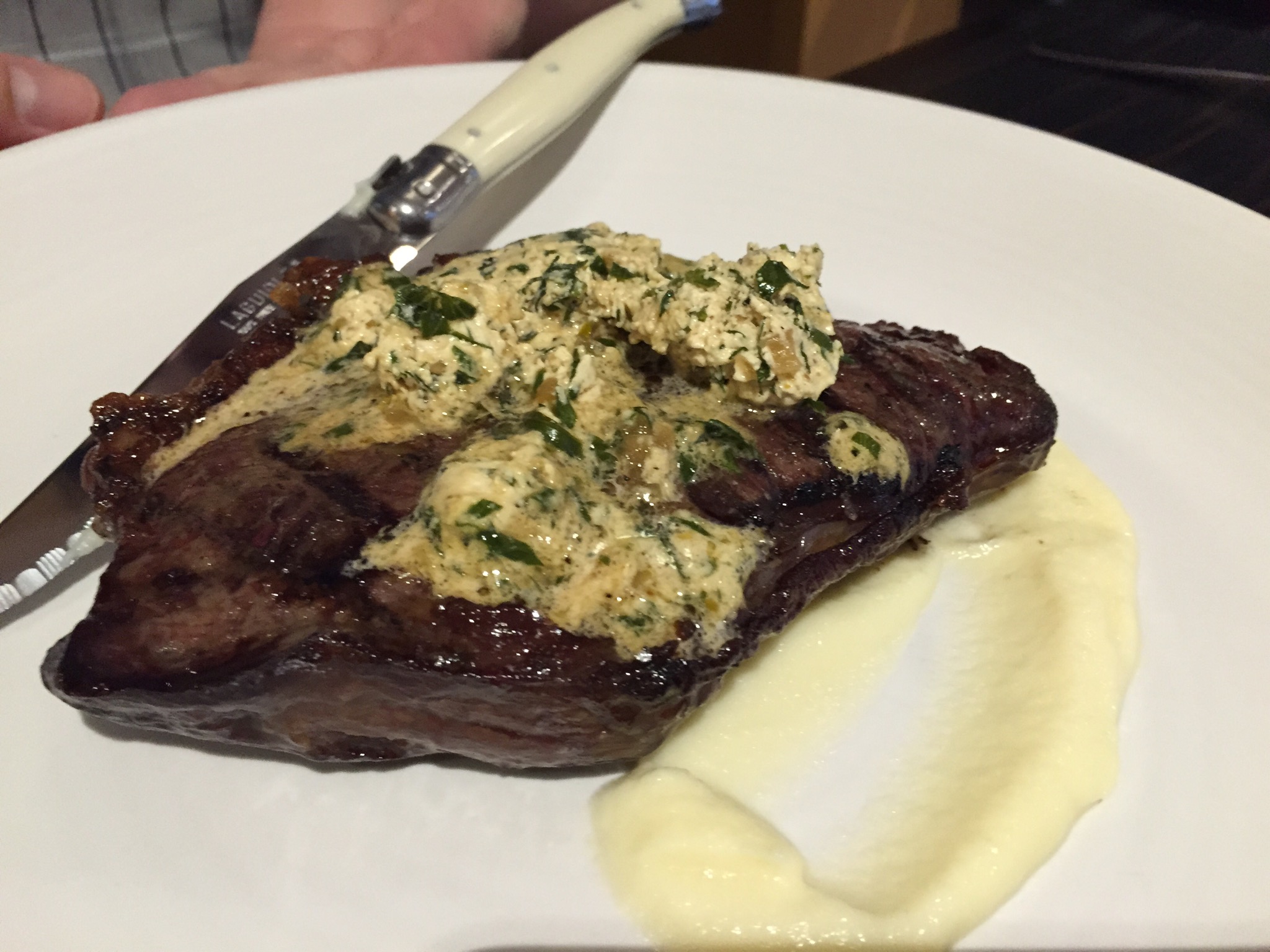 I’m usually a huge fan of peppercorn sauce (pictured) but after tasting the fresh perigord truffle jus, I just couldn’t go back. 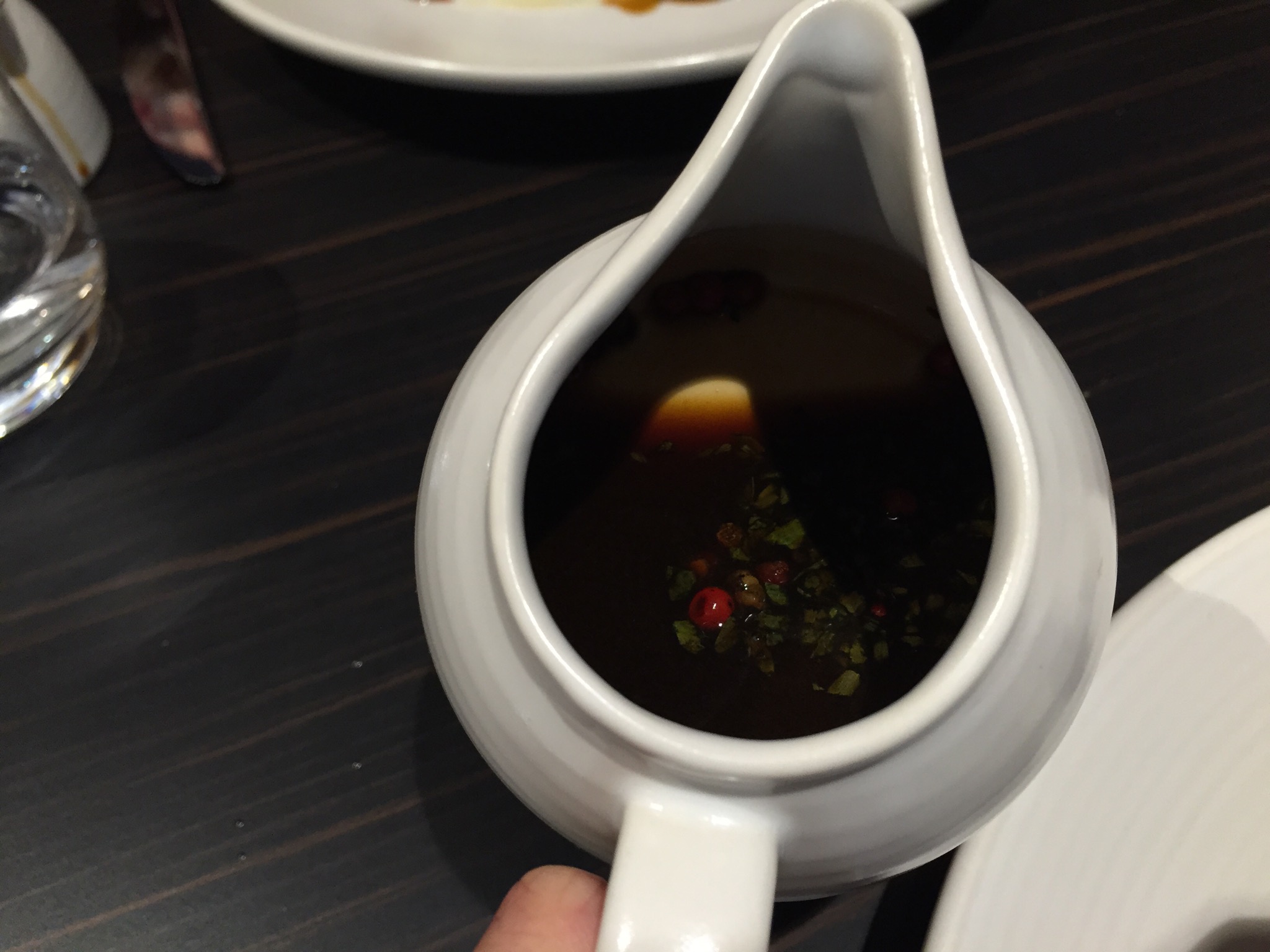 300g Scotch fillet 300+ day ration fed 5+ ($38.00) with pink peppercorn and tarragon jus. I asked for my steak to be cooked medium rare and it came out beautiful, juicy and incredibly tasty. It was all good until I tasted TimmyC’s steak and sauce.
We were provided with Laguiole steak knife, a French cutlery brand which carved through the steaks with ease.

A cross section of my steak before I took my first bite.

300g Rump 600+ day ration fed 9+ ($52.00) with fresh perigord truffle jus (+$10.00). My mistake was taking a bite of TimmyC’s steak in between eating my steak, I almost immediately got steak envy and kept watching and waiting for him to get full so I could swoop in and eat the rest of his steak. A lot of the time, paying more for a steak doesn’t mean it is better but I feel in this case it was. There was marbling throughout the steak as well as tasty bits of fat around the sides. Also after tasting TimmyC’s sauce meant I didn’t like my pink peppercorn jus afterwards but he was nice enough to let me sparingly use it on my steak and chips. 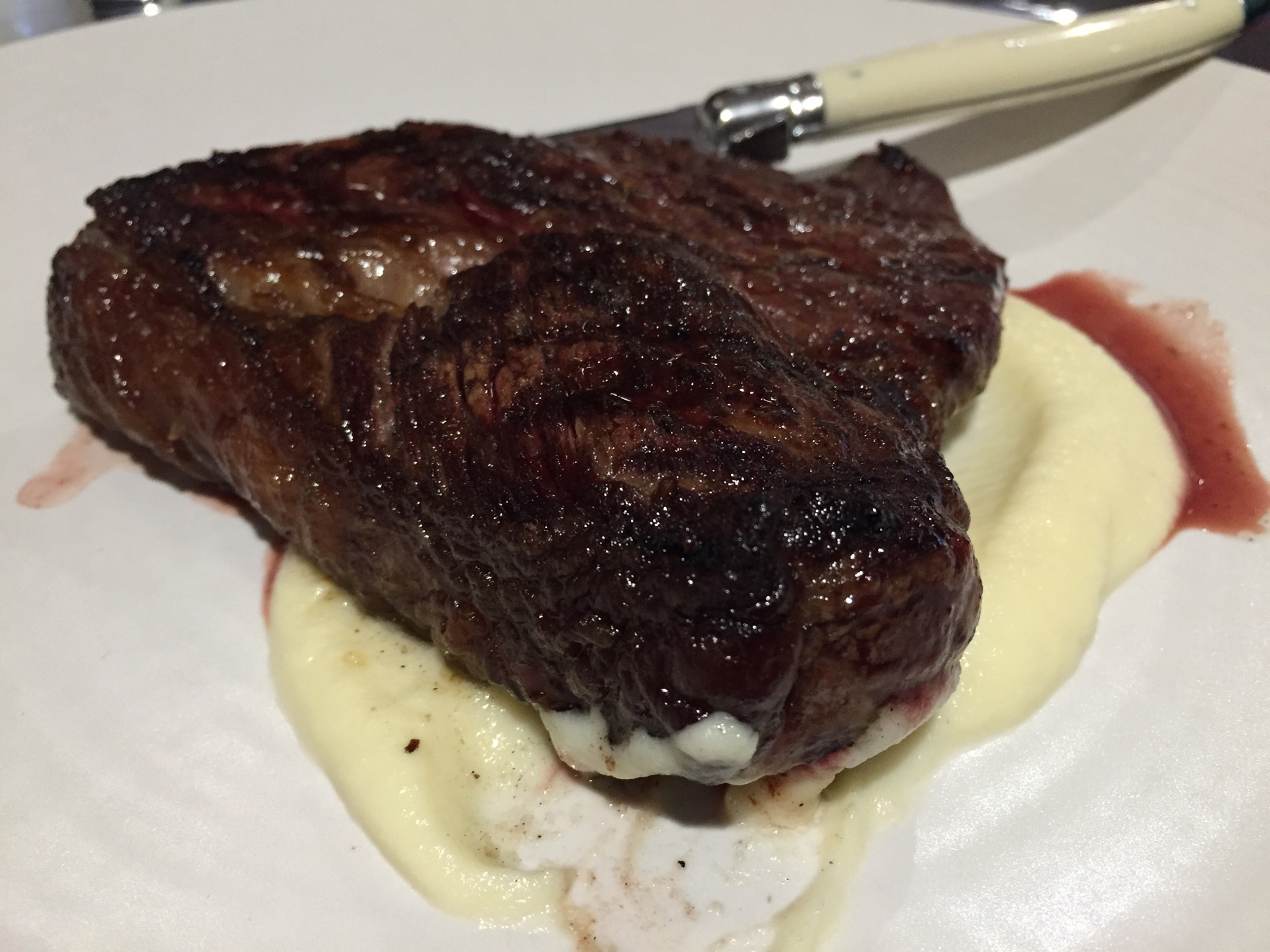 Onion rings. I really disliked the thick batter around these onion rings, I have had better from a cafe a few days earlier, I found these disappointing and I wouldn’t order these again.

Pomme fries. Yes it is just a fancy way to say shoe string fries but they were served hot and well salted which is all you could ask for. A great side to dip into your sauce and accompany your steak. 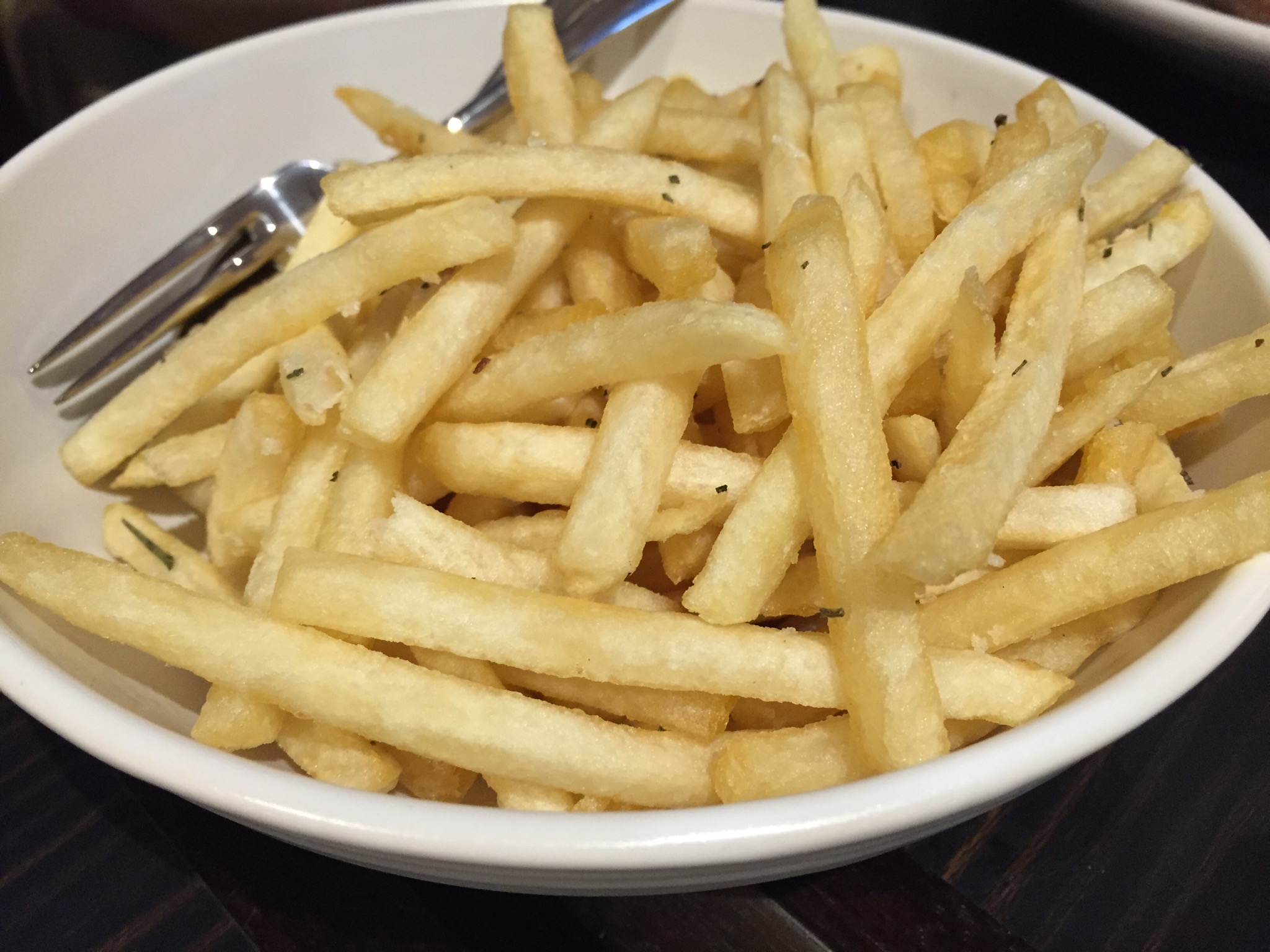 Paris mash. Only every so slightly gritty in texture but it wasn’t buttery and delicious like I’m used to with most Paris mash, it must have been a healthier version.

Caramelised Spanish onion with pangratatta. My preferred onion side of the two but I still could have done without it. 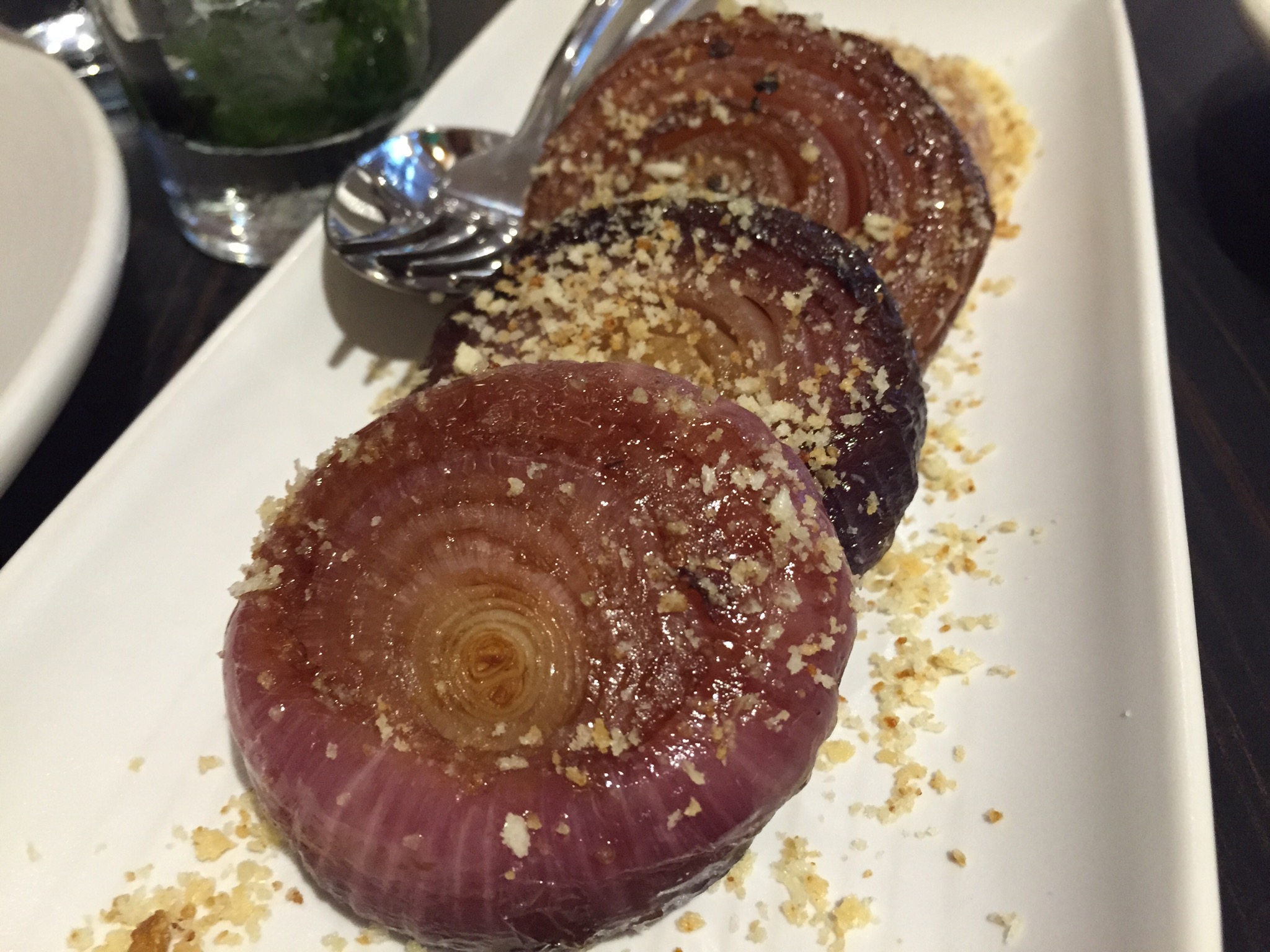 The waiters had been attentive all night but after leaving us with the dessert menu we looked around the dining area and with only three tables with patrons left, there was no one around to serve us. We waited long enough for us to contemplate having dessert elsewhere, but I’m glad we stayed.

Which dessert would you have chosen?

Passionfruit souffle with passionfruit sorbet ($18.00). The passionfruit sorbet packed a punch and upon tasting it, we all made a face like we just sucked a lemon. It was intense and I thought the flavours would lend it self better to a vanilla based dessert rather than more passionfruit. The souffle itself was very light and had a distinct passionfruit taste, easily one of the nicest souffles I have ever eaten.

The souffle had a great airy light texture.

Vanilla panna cotta macerated strawberries and hazelnut tuiles ($16.00). Wow, if this dessert had a bum, it could twerk like mad! We spent the better half of 5 minutes watching our dessert hypnotically jiggling about on the plate. It had an incredible smooth texture with a distinct sweet vanilla flavour and I love how the vanilla beans are dispersed throughout and not just stuck on the top. 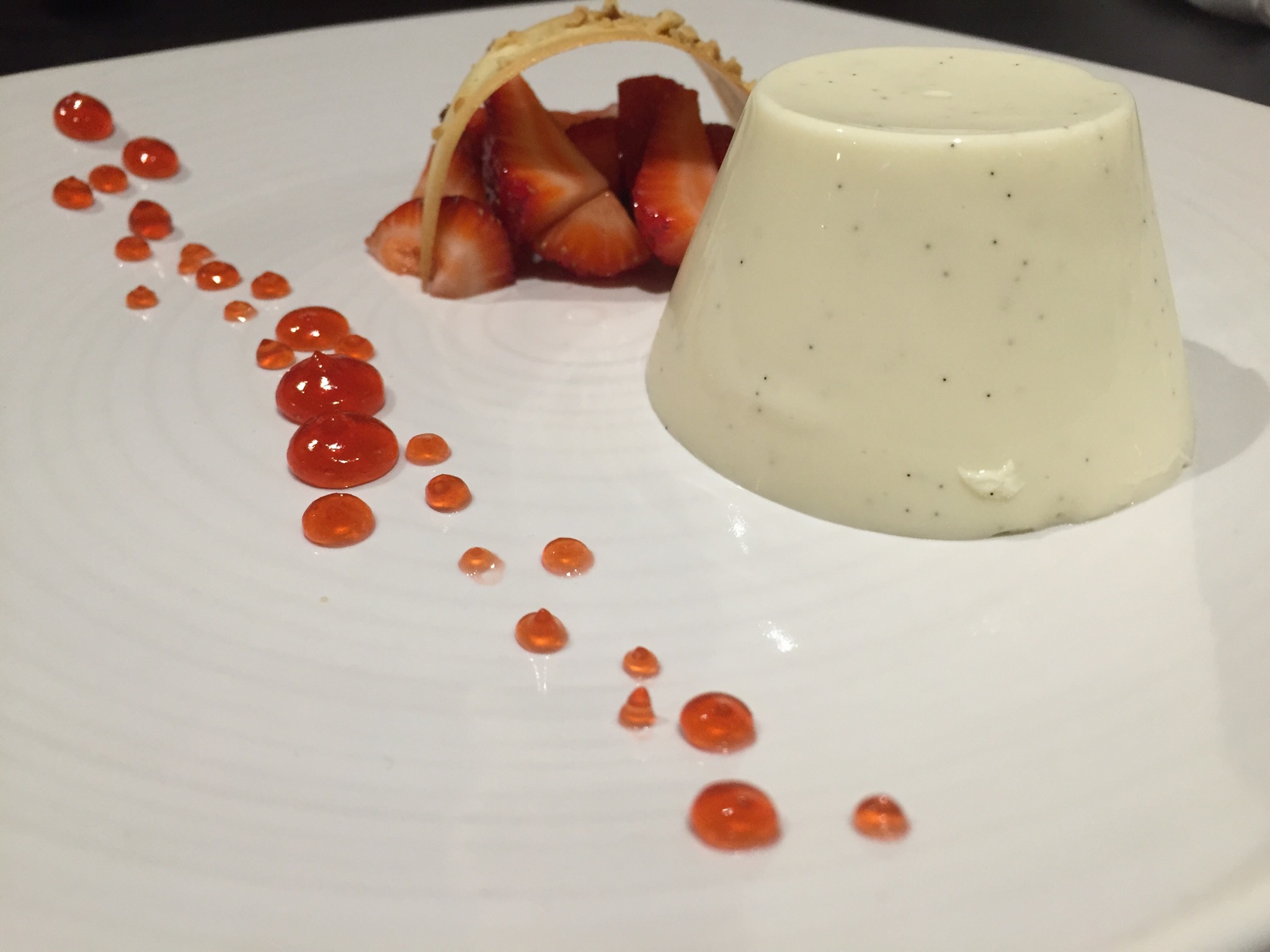 We received the bill and lucky we double check as some of the steaks were overcharged.

It was hard to navigate ourselves around the menu, the steak choices on the list are extensive so we just chose based on favourite cuts and marbling score. We were told we wouldn’t get a bad steak here and after the meal we all collectively agreed. I love how they cook their specialty well and the fabulous desserts were a pleasant surprise.

7 thoughts on “Chifley’s Bar and Grill”