I was going to just let this restaurant visit slide but as soon as the amazing warmed bread arrived, I instinctively started taking photos. We had taken TimmyC’s Grandma with us to the Stunned Mullet two years ago and she was very keen to go back, was it was going to be as good as we remembered?

Sourdough with Roast Chilli and Pecorino Little Gen EVOO 8 ($8.50). It is very expensive for bread and oil but it is warmed perfectly, the crust is crunchy and the bread itself is so soft and fluffy. Yes TimmyC’s Grandma couldn’t wait and grabbed the first slice before I took a photo.

Glacier 51 Toothfish soy and mirin stock, Asian salad, galangal, smoked shallot chilli ginger reduction ($48.00). I had my heart set on the Cape Grim beef but when the waiter was describing the toothfish, I was easily swayed. His logic is that there is always beef on a menu but you would rarely get a chance to eat toothfish.

The flesh of the fish was unlike any fish I’ve had before, the texture was a cross between a scallop and the meaty pincer of a mud crab. The meat itself wasn’t sweet like a mudcrab but you got hints of sweetness from the mirin in the sauce. I had no regrets ordering this dish.

Photos of my dish from every angle. 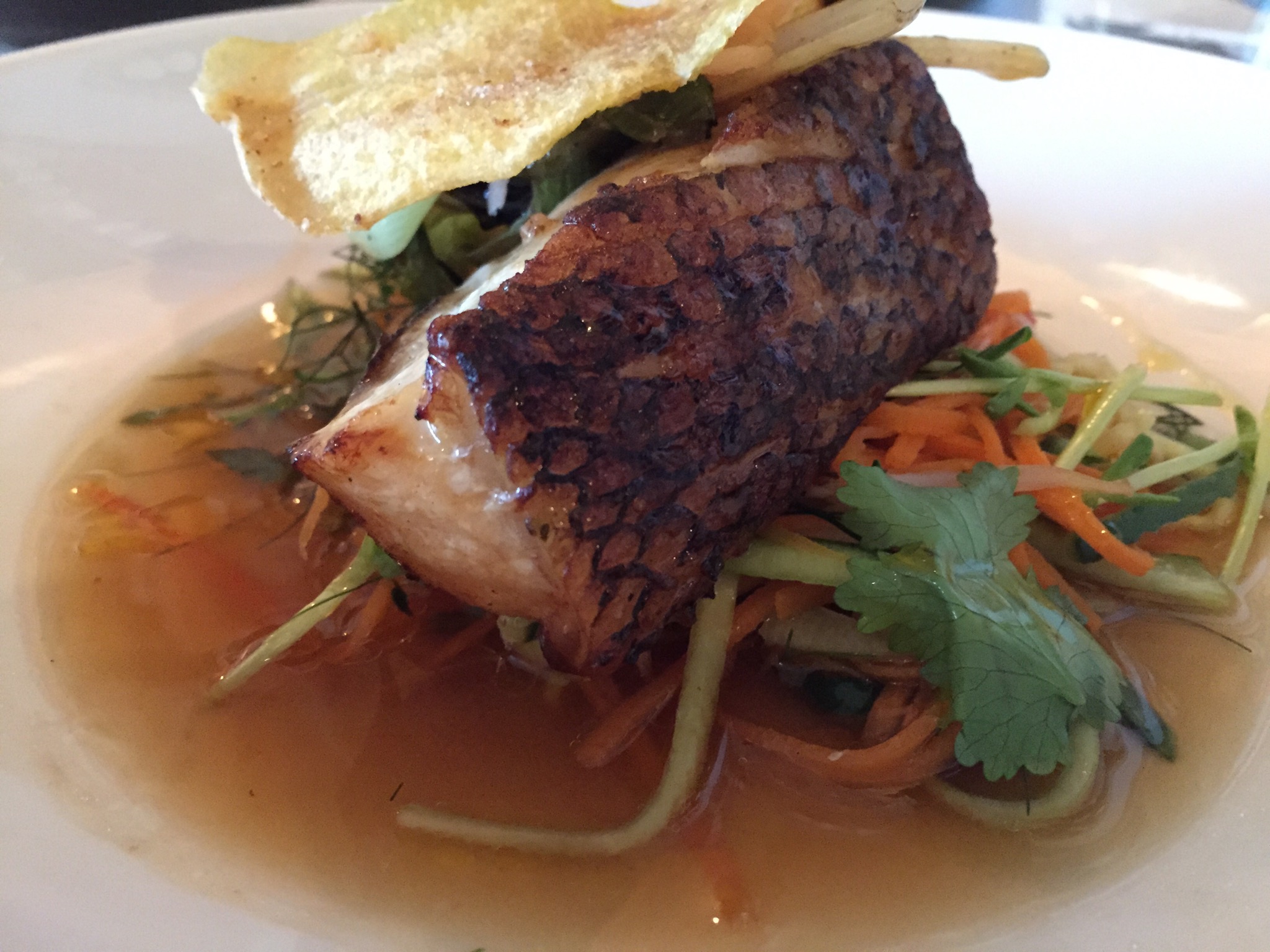 Pork Belly and Seared Scallops nuoc cham and Asian salad ($38.00). TimmyC had his eyes set on the pork and scallops and asked for this to be served as a main, I thought the main price was steep for not many pieces of pork and scallops, I’m just glad that they executed this dish perfectly. The pork crackling was crispy and fatty and the pork was well cooked while still remaining moist. The scallops were fantastic! They were easily the best scallops I’ve had in a restaurant recently; the sear was really good and the meat was naturally sweet. TimmyC wasn’t particularly a big fan of the bold Asian flavours in the sauce but we just tilted the plate so he would get less of it. 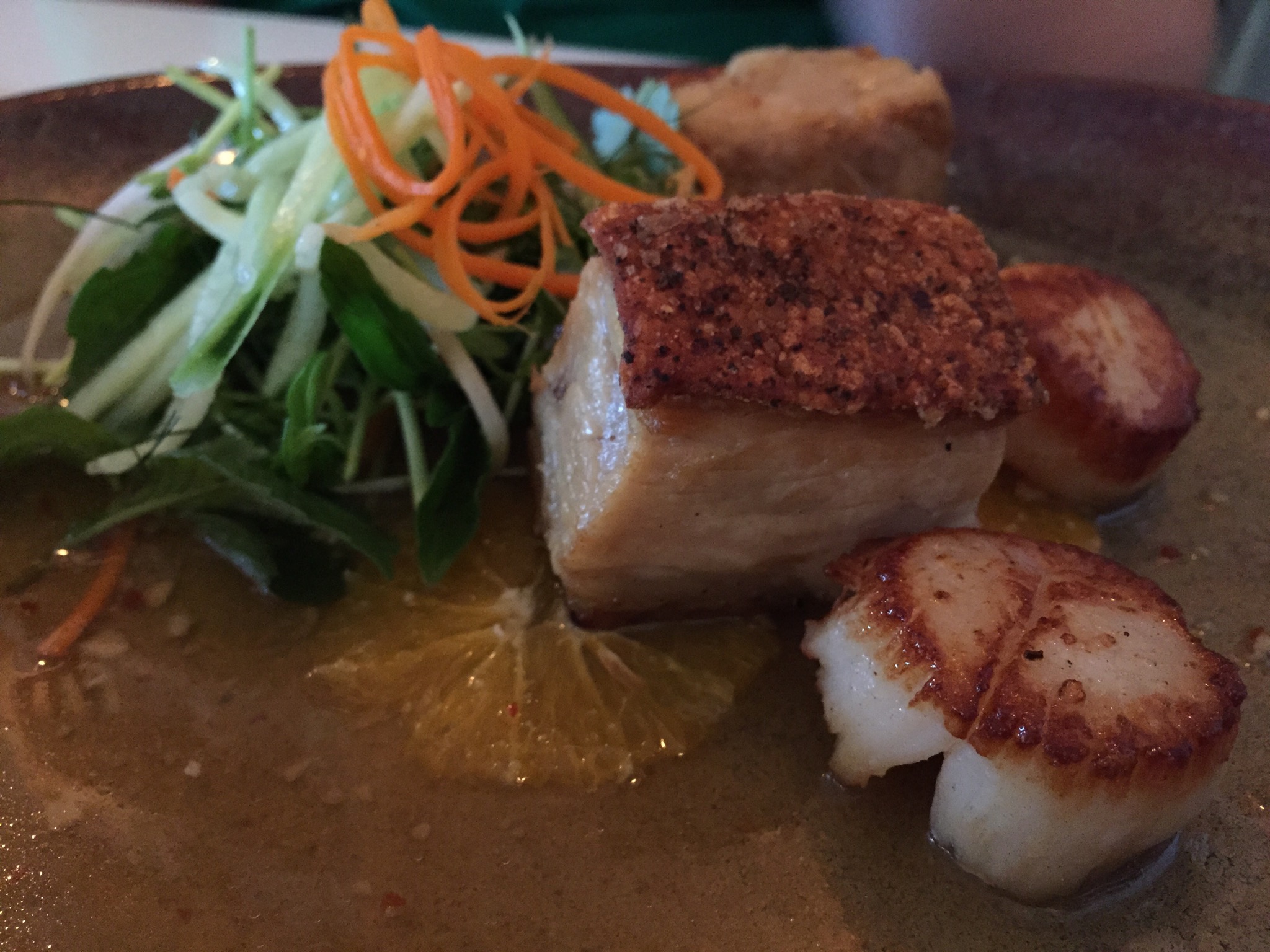 Lamb Shoulder parsnip puree, red chutney, labne, watercress, compressed apple, papadum ($25.00). Grandma ordered a smaller sized dish but wow, the flavours were so complex and there were so many textures to the plate. I am now a big fan of labna! The lamb meat was super tender and had so many spices in it which gave it a middle Eastern feel. 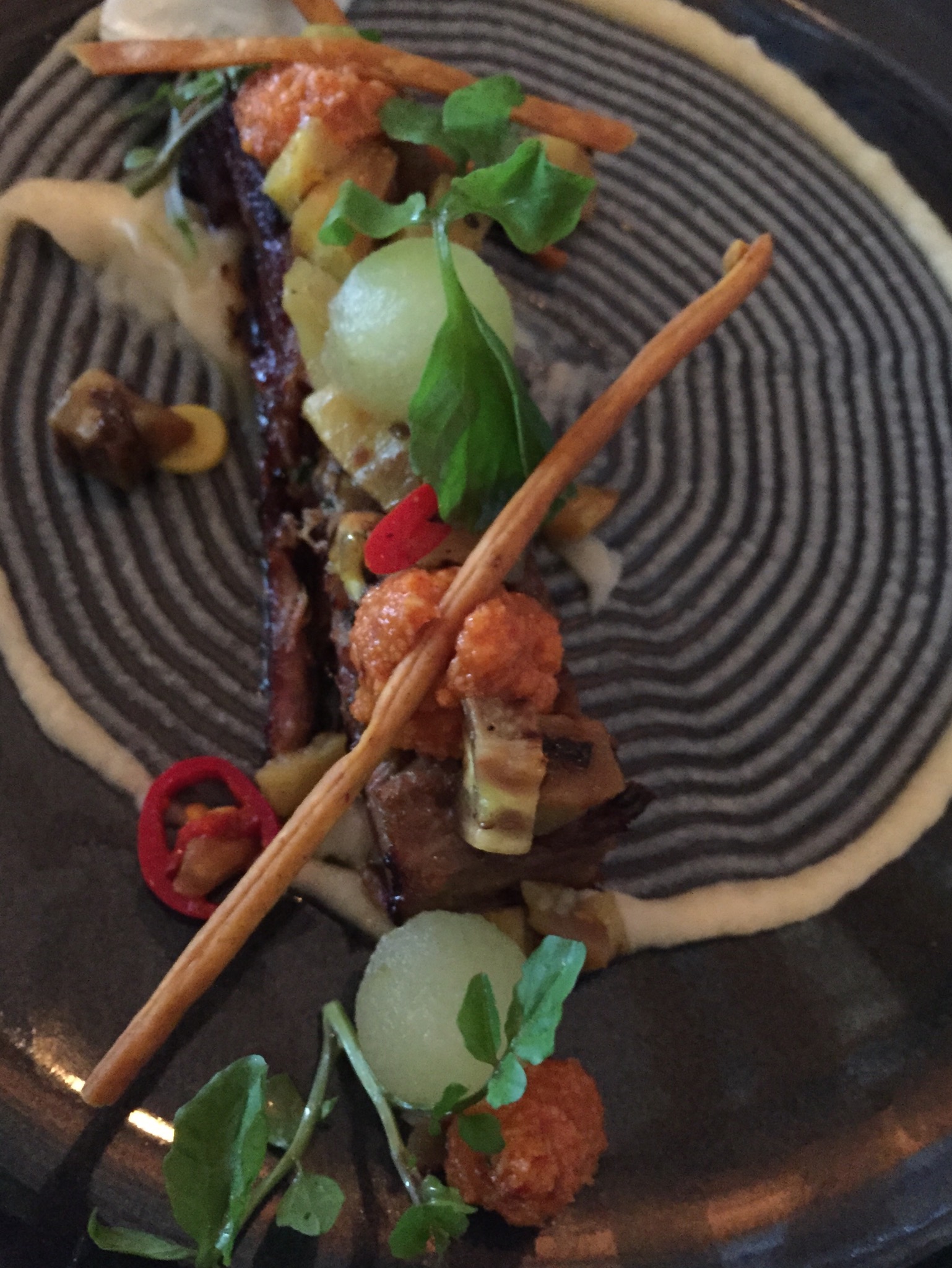 Mizuna lettuce salad with hazelnuts, pear, pecorino and verjuice ($11.00). I loved the delicate pecorino cheese which was mounded on top. The greens were partly light and well washed and I adored the combination of pear and hazelnuts.

Chocolate Hazelnut textures, white chocolate cremeux, praline semifreddo, strawberries, chocolate brownie, vanilla mascarpone cream. I thought there was too much going on with this dessert which was much to TimmyC’s delight as he devoured the rest. He has a bigger sweet tooth than me so he probably didn’t think that this dish was too rich. 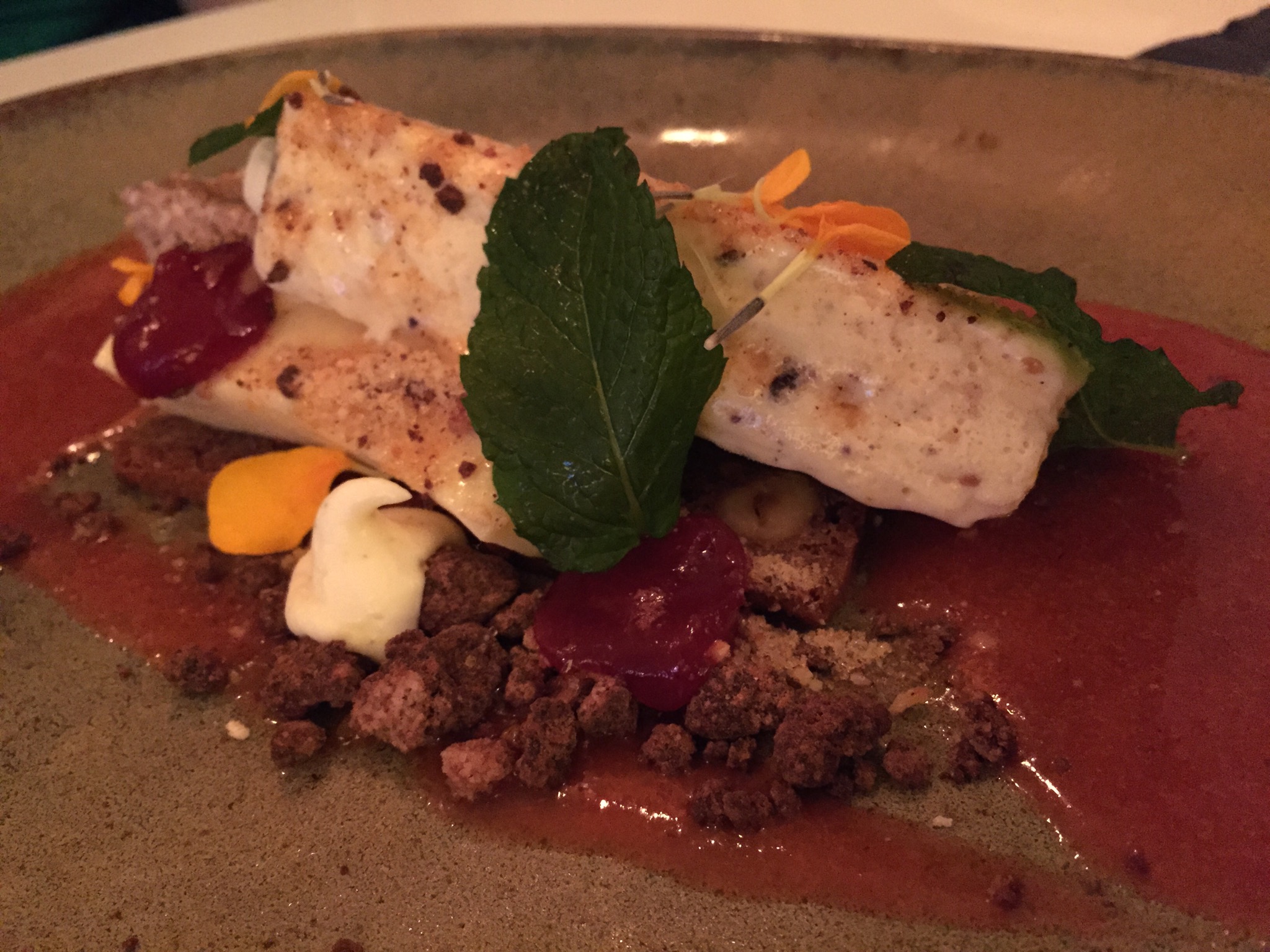 Vanilla Bean Macarons, poached pear, cinnamon crumble, gorgonzola gelato, cider gel. I really liked their size of macarons, they were big but very delicate with a subtle vanilla bean filling. I knew instantly TimmyC would dislike the gorgonzola gelato but I thought it paired perfectly with the poached pears. The two blobs of gel looked deceivingly black but that was because of the slate plating, it was actually in fact like a very smooth apple sauce. 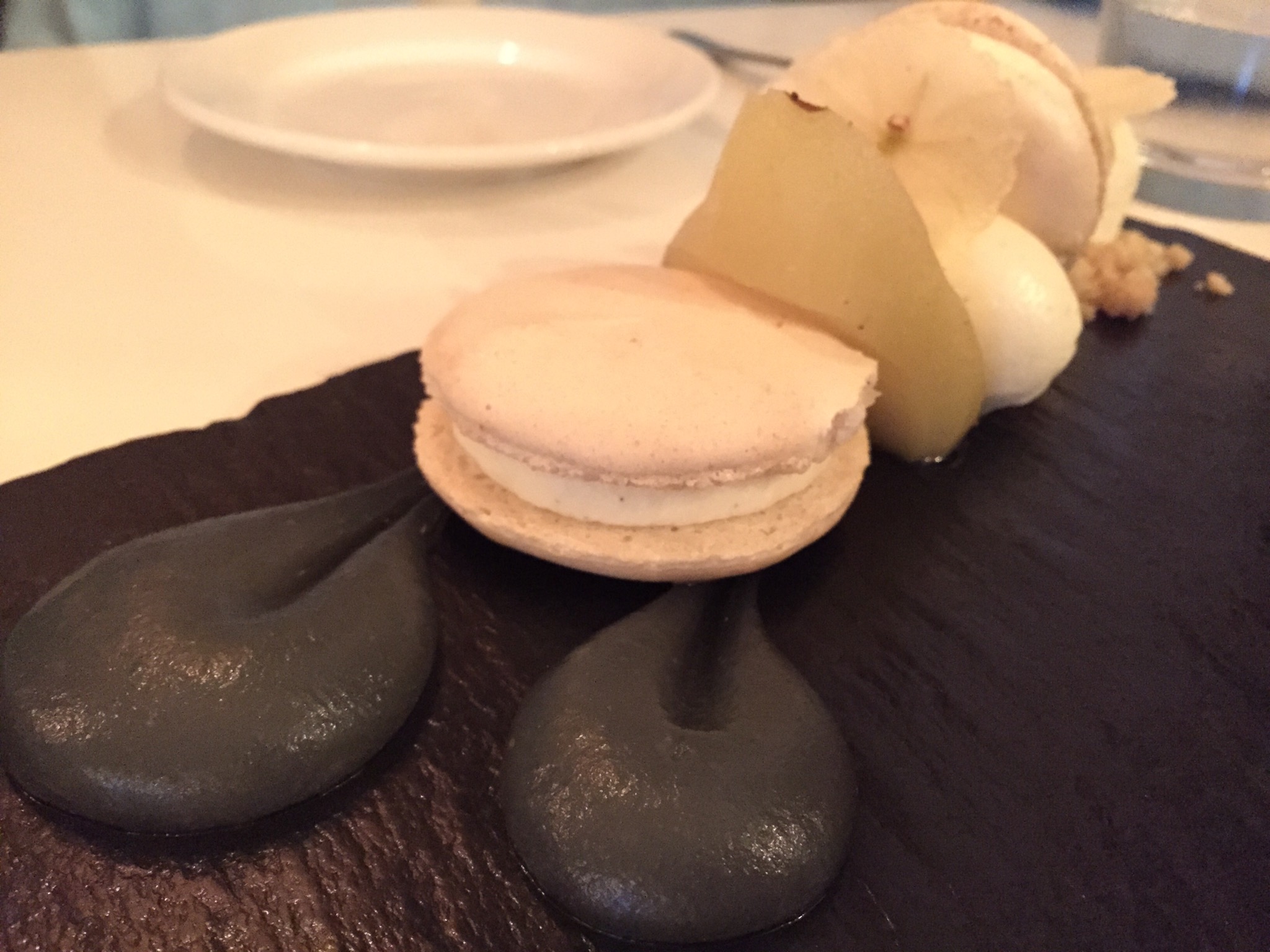 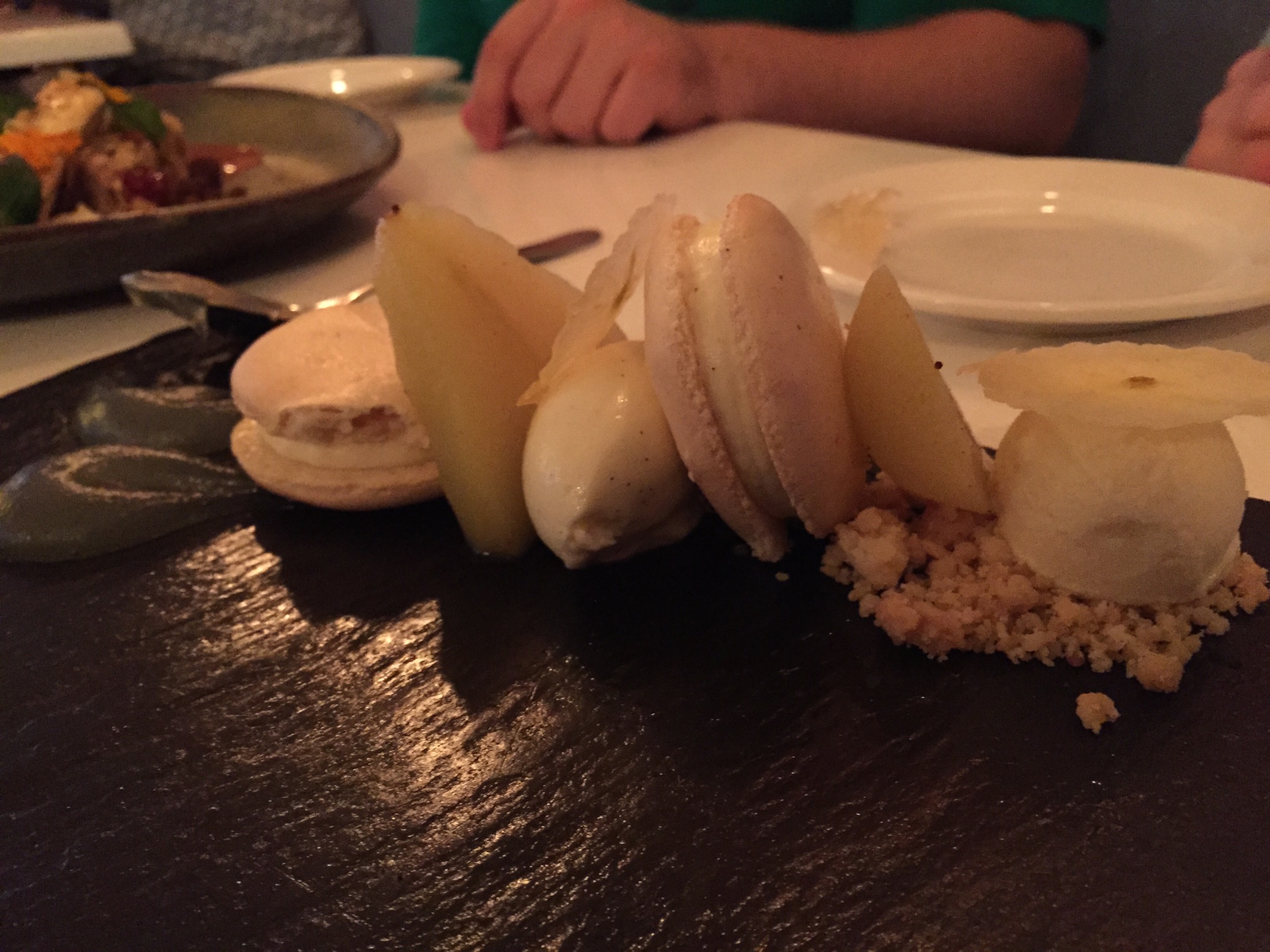 The staff is always attentive and polite here and the food is magnificent. Even if you just bypass through Port Macquarie, I definitely recommend that you plan your trip around having a meal here.