I’m deciding what I’m going to wear for the next month… I should be able to disguise pastry flakes and pasta sauce stains with patterns right?

TimmyC has had a deep love for waffles ever since he came back from his America trip, so when I heard that there was a ‘takeaway diner’ in Mawson I took him there immediately. California Cafe has joined the many other cafes that have popped in recent years which has made Mawson a hive of activity and a location full of choice. Not as many cafes are open on a Sunday but luckily the diner was. TimmyC is a bit of a snob when it comes to waffles, he dislikes pre-made rock hard ones (but who doesn’t) and would prefer them to have deep wells so all the syrup and ice cream catch in the pockets.

There were waffles and pancakes on the breakfast menu served with bacon, banana and maple syrup, so TimmyC was set; although it was early I felt like a cheeseburger from this diner. We went to order at the counter and TimmyC’s first question was “do you make the waffles in-house?”, the waitress answered no, “do you make the pancakes from batter?” which I thought was a stupid question until it was also met with a ‘no’; he opted for an eggs benedict instead.

The cake cabinet should have been my first clue not to eat here, can you see the huge chunks of carrot in the carrot cake? 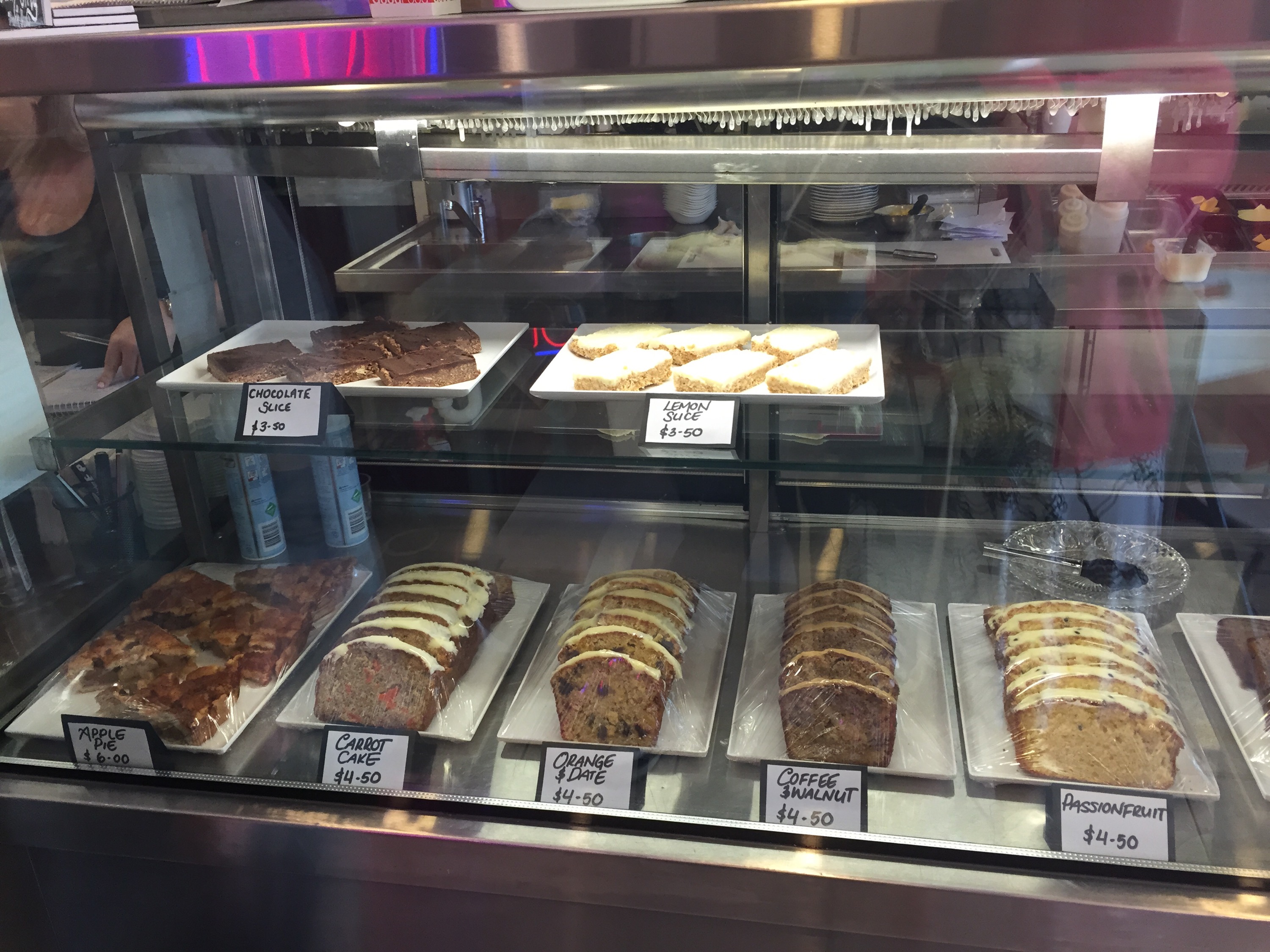 While we were waiting for our food, the woman next to us had ordered the waffles and she was super excited when three thick store-bought waffles topped with bacon and banana was placed in front of her. I had noticed that she shared some with her Mum and even then they only finished half a waffle each which meant there was plenty still left on the plate after they left.

Caramel thick shake ($7.00). We watched them make this and it had tonnes of ice-cream in it and there was just enough topping without making me feel sick. YUM! 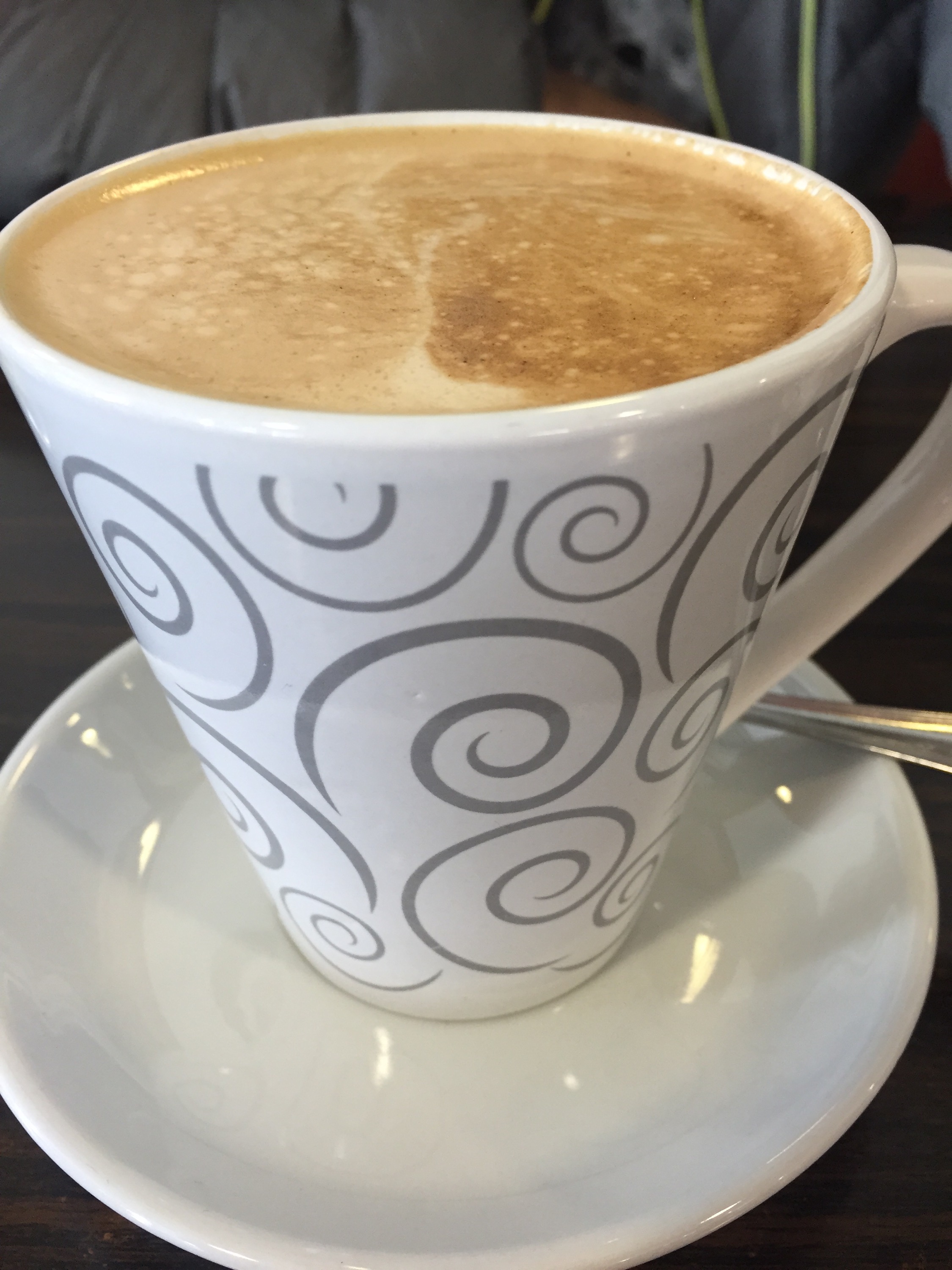 Eggs benedict eggs with bacon on a sour dough roll with hollandaise sauce ($14.90). The hollandaise was nice enough but still tasted like it was bottled sauce and I’m a bit confused as to why there were unseasoned chips on the plate. A very underwhelming breakfast when I promised TimmyC waffles from a diner. I don’t see exactly what the kitchen is cooking when the sauce is from a jar, the waffles and pancakes are store-bought and the chips are from frozen packets.

The plates that they serve on are massive.

Cheeseburger with fries ($8.90). I was really disappointed with my burger, it was an okay patty drowned in tomato sauce and mustard topped with a plastic (at least melted) slice of cheese. Don’t get me wrong, I love plastic cheese but I couldn’t taste much of anything other than mustard and tomato sauce. The chips were hot and seasoned with something that I couldn’t pick, it reminded me of mamee noodle snacks. The thick shake helped with washing the acidity of the sauces from my mouth. 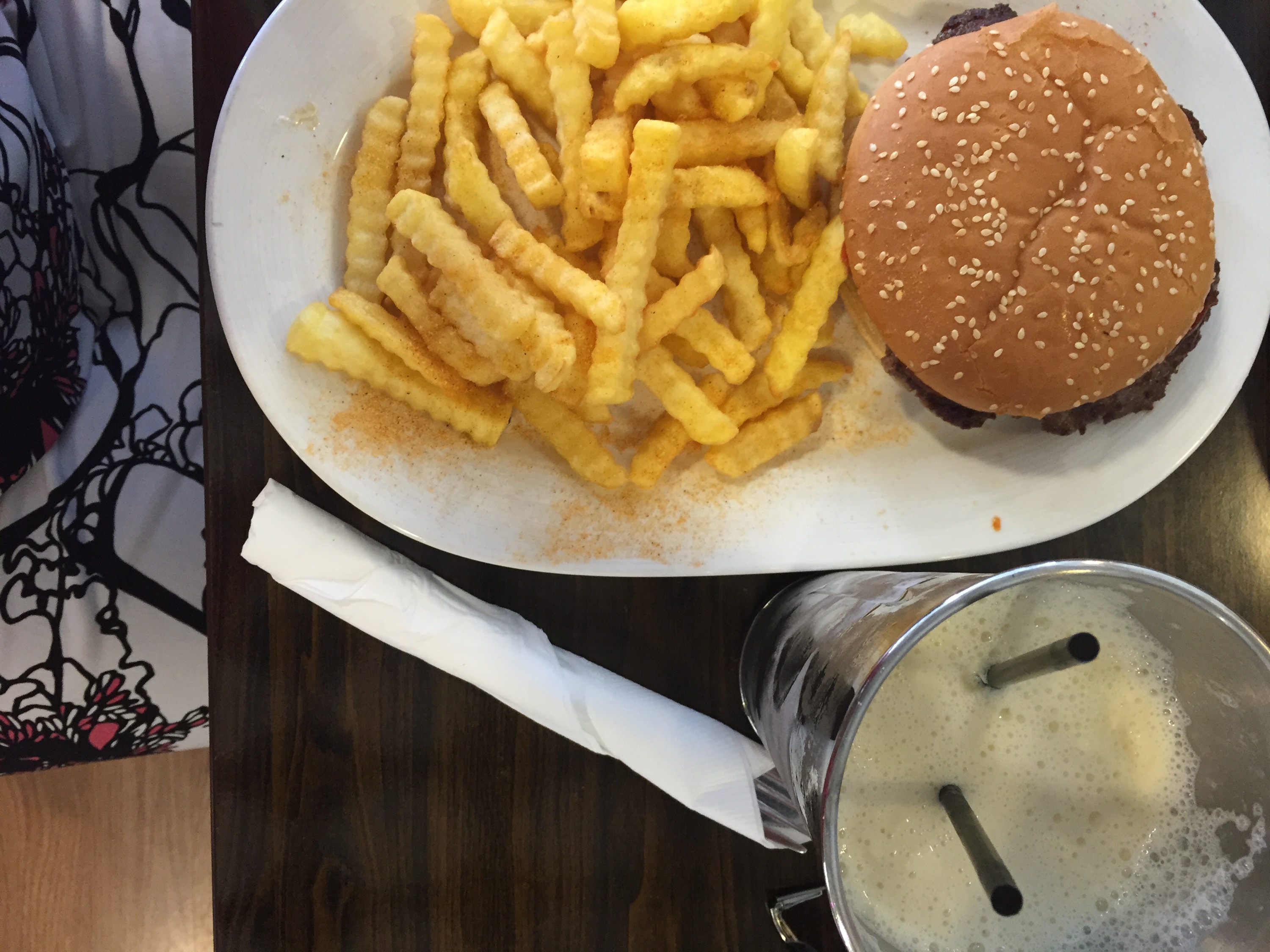 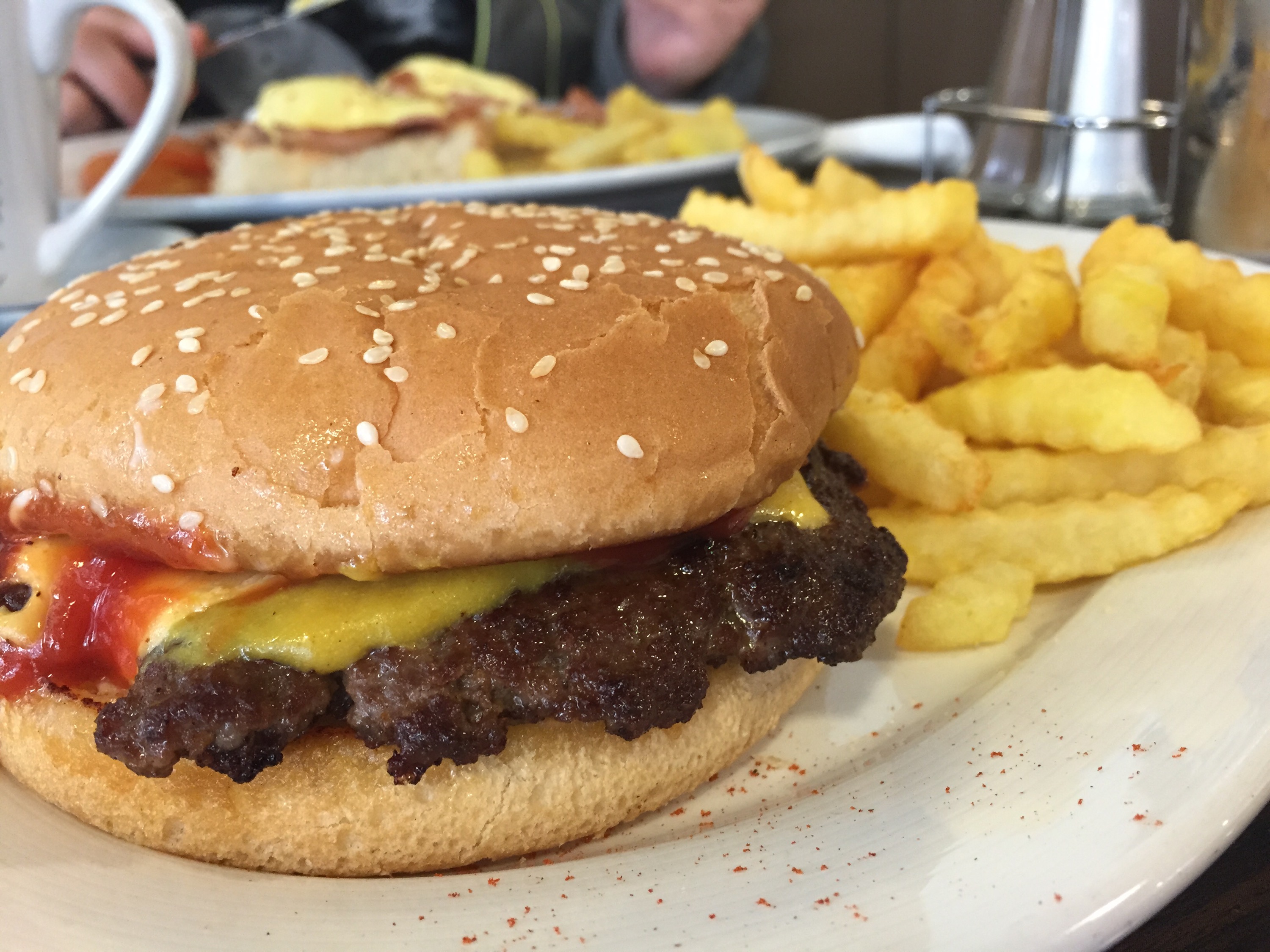 I couldn’t taste anything other than sauce. 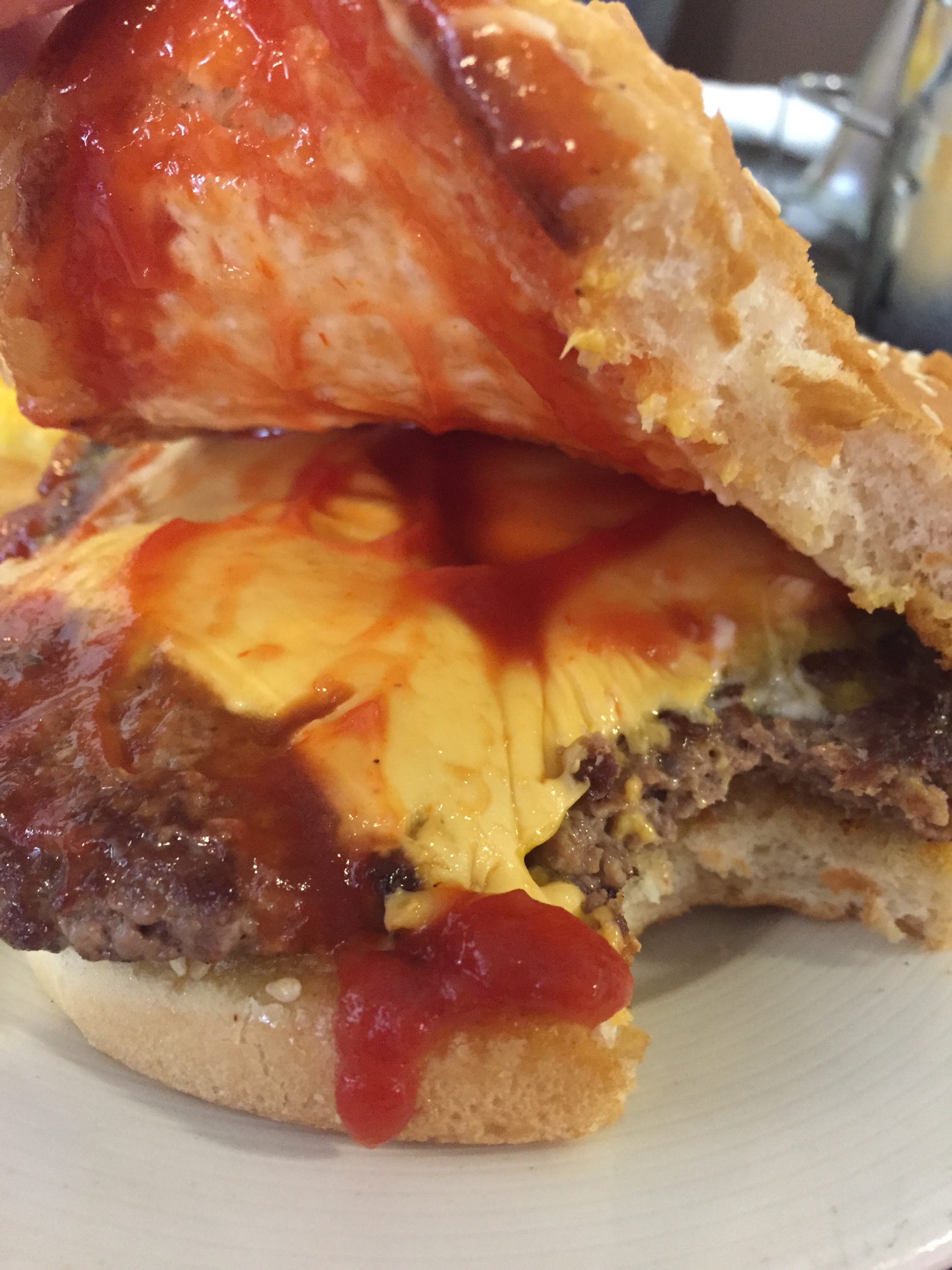 The diner was getting busy with lots of staff from neighbouring business coming in for takeaway so some people obviously enjoy the food here but with so much better choices in the area, I won’t be coming back.