I have had this idea when I first started my blog however many years ago and I have finally gotten around to writing it.

When I stayed with TimmyC’s family for a few years, his Mum thought it was ridiculous that there were so many able bodied people in the house yet she was cooking every night of the week. That’s when the concept of designated cooking was born.

We were all to choose one night of the week and cook dinner for the family. TimmyC and I chose Tuesdays as we were most likely to be home, his Dad chose Sundays, his brother flipped somewhere between Thursdays and Saturdays but we were never home to try his cooking and his Mum filled in the gaps. Fast forward a few years later, TimmyC and I had moved out but we kept with the tradition of Tuesday night dinners, his family would come over for dinner and they would bring dessert and we would go over on Sunday nights and it would be our turn to bring dessert. Hence the name: Tuesday eats, Sunday treats.

We have been cooking Tuesday dinners for over 7 years now and we attempt to mix it up a little, trying new things when we feel adventurous but now if I’m documenting Tuesday and Sundays maybe I’ll up the ante a bit more. It feels like we are on one of those cooking shows where they cook a meal in a time limit, TimmyC and I both work full time so dinner has to be made with less than 1.5hrs prep for 6-8 people (one could argue I could prep things the night before but we just aren’t that organised), two of which are vegetarian. I’m not vegetarian myself but I feel that just ‘omitting the meat’ doesn’t make the best vegetarian meal so I usually go out of my way to make another dish which is vegetarian friendly. When we come home, it looks like an Ajax commercial where we are frantically trying to prepare the meal, clear the dining table and set it for dinner guests.

When we first started cooking together, I remember yelling at TimmyC a lot. His cooking experience was limited and he would do silly things like walk around with a sieve full of icing sugar without anything underneath. Seven years later, we have both found our groove and work cohesively in the kitchen, cleaning up as we go (it’s the easiest way to do it) but I am still ‘head chef’ as TimmyC usually doesn’t know what we cooking until on the night, where as I have thought about the weather, what is in season, what vegetarian option would be equivalent and the most efficient order to do things in.

What better way to start than with last Tuesday’s dinner (yes I’m posting this late). I’m still not feeling 100% so I chose the easy option of pasta bake as I had ample pasta, cheese and vegetables. Even at the age of 30 I have to ‘hide’ extra vegetables in my meal so I won’t notice it and this is definitely one meal that you can do that with. I usually make my own sauce but while I was at the shops buying a roast chicken I grabbed some pre-made pasta bake sauces as well *gasp*.

I sautéed some diced carrots, zucchini, cherry tomatoes, red capsicum corn kernels off the cob (basically all the vegetables I had) and garlic. I just wanted to soften the vegetables, cook the pasta, stir the sauce and vegetables through, throw it in a baking dish and top with ample cheese and throw it in the oven. That way all the oven has to do is melt the cheese because everything is already cooked and ready to go.

I would usually make another vegetarian dish but this was easy to substitute the meat for something else. I spooned enough mixture to fill a loaf dish into a bowl and threw in some diced grilled haloumi so there was a salty aspect to the dish and for the rest of the pot of pasta I stirred through some roast chicken pieces (all cooked and ready to go, all I had to do was shred the meat and eat the limbs as a perk of being in the kitchen, another aspect to make this dish ‘easy’).

The more colour the better! I also tossed in handfuls on basil that I had in the fridge, I should really stop buying it unless I have an intended use for it.

Bread leaves the table as quickly as it is placed down so I usually have some sort of bread as a side. To contrast against so much carbs and heavy food, I wanted to serve dinner with a side of crispy refreshing salad. I looked up a recipe for apple and celery salad and came across one that had a tangy dressing to go with sweet apples. I also changed the dice of the apple and celery so it was matchsticks rather chunky like the pasta bake.

When we first made this dressing, I thought we would need more of it but it is rather quite strong so it only needs a light coating. 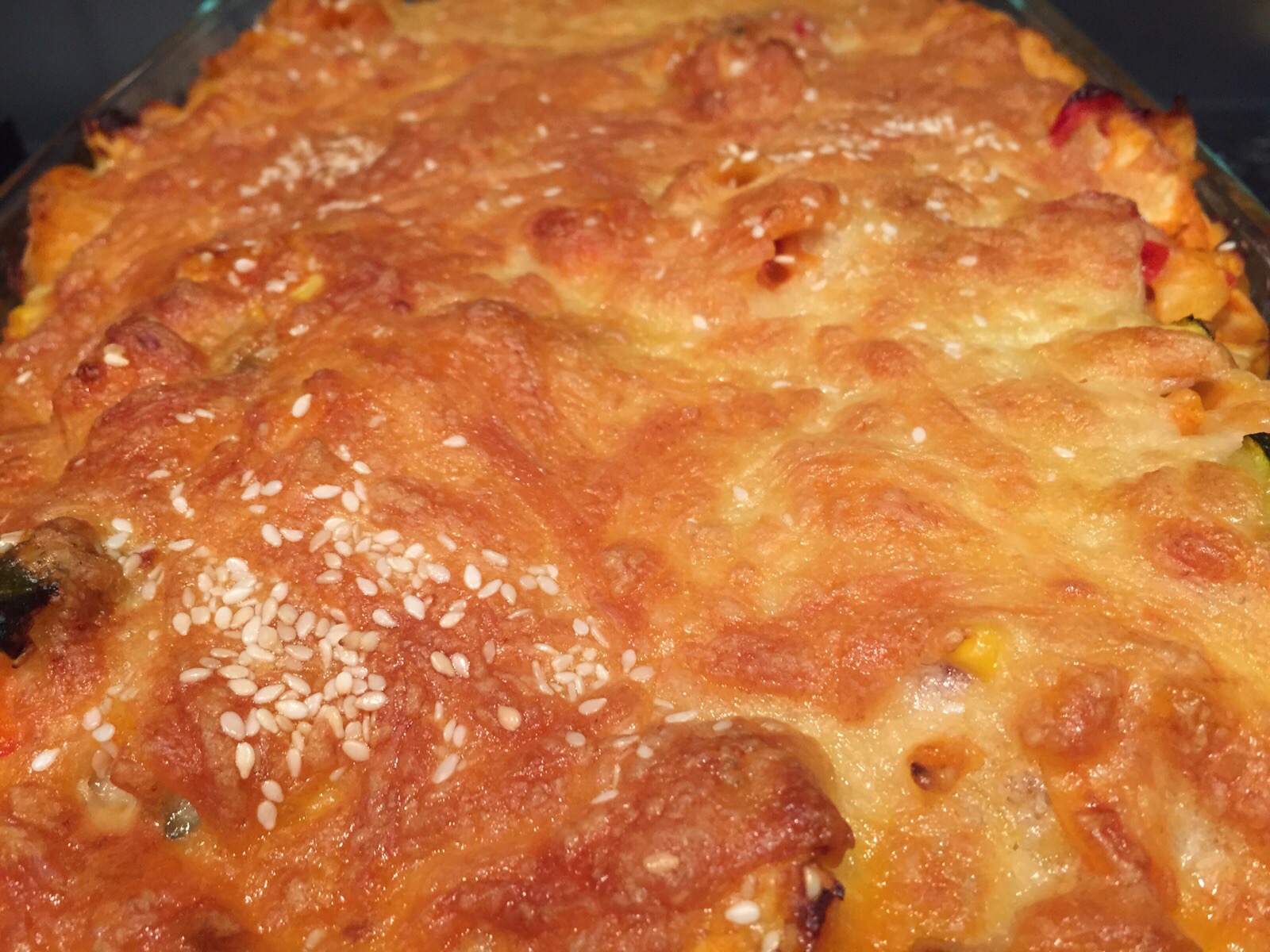 Dinner is served! The pasta bake sauce I used was a bit spicy and really lifted the flavours of vegetables and cheese.

I get random cravings for sweet things and this week I wanted an apple tea cake with a crumble topping. It might sound really specific but I haven’t had cake like this before but it made it easy and specific to google. I used taste.com‘s recipe and accidentally whipped cold-ish butter with sugar and eggs rather than beating the eggs and sugar first and adding melted butter in. Silly me, I was multi-tasking and also making a chicken stock. It still turned out alright, I would have preferred a more moist cake but maybe it was the way I mis-read the instructions. I think I would make this again and maybe substitute some of the butter for apple sauce for a healthier option (and it might make it more moist?) and also change the crumble recipe for a more crunchy version. 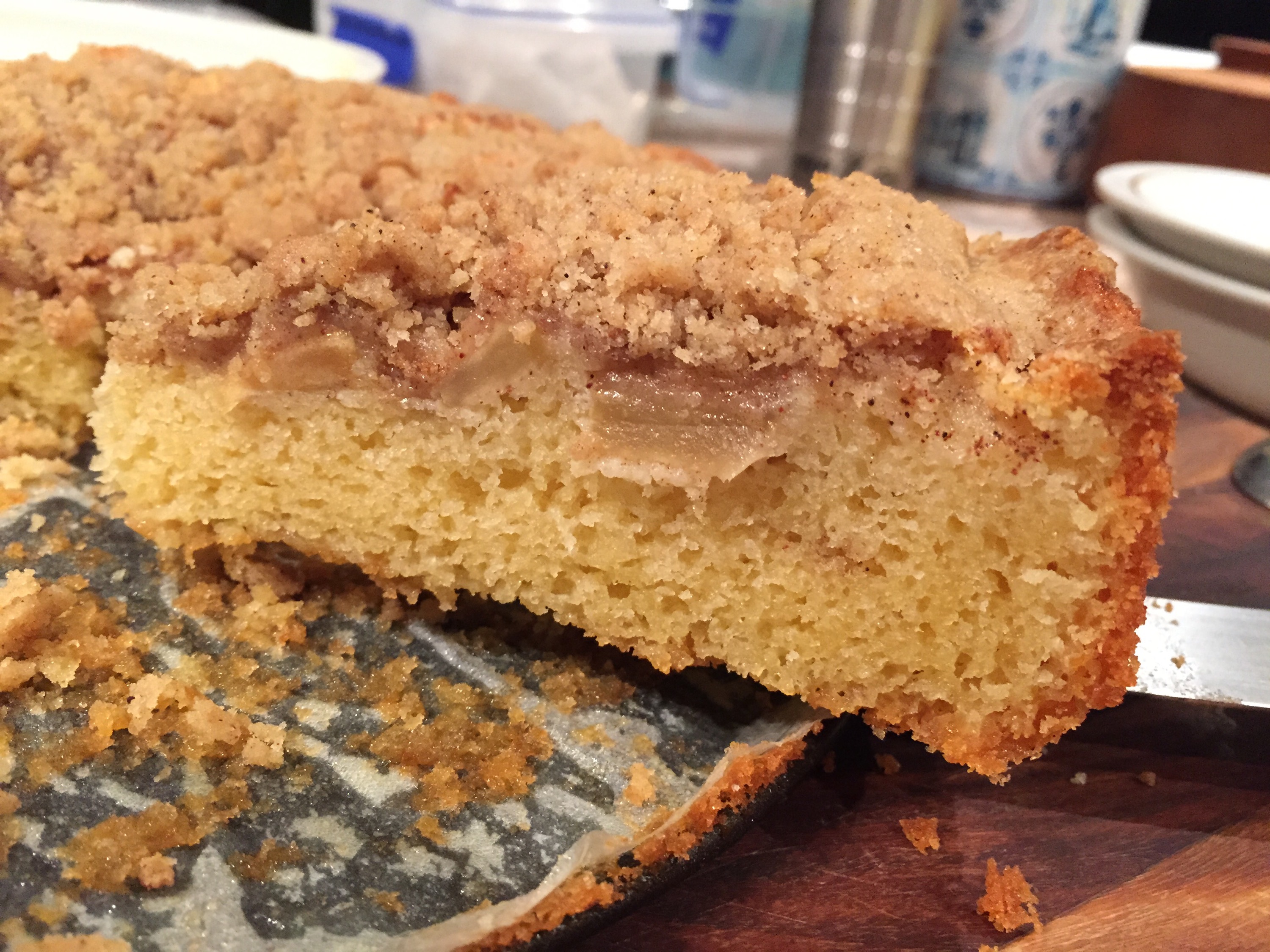 The apple tea cake with crumble topping was a little dry for my liking but I served it with TimmyC’s freshly made and still warm custard so you couldn’t tell.