Despite having eaten half of Canberra, I dragged my friends away from The Forage to go have dinner at Močan and Green Grout with me. I had recently started talking to one of the chefs, Jose Blanco who has been very encouraging of my blogging and I said I would pop by to try out his handy work.

I haven’t been to Močan and Green Grout in years (see my first post here) but TimmyC and I remember vividly that the food was delicious even though we found the bill total was a bit steep.

Organic cola ($4.50). My friend said I described it perfectly when I said that it tasted like a melted cola frozen slushie.

The waitress explained that each dish would come out one at a time to allow for maximum enjoyment of each dish. I much prefer it this way, otherwise I’m left (of my own accord) taking photos one dish after another and always eating one plate behind. This way I could enjoy each dish as they come, hot and fresh and discuss the one dish with my dining companions. 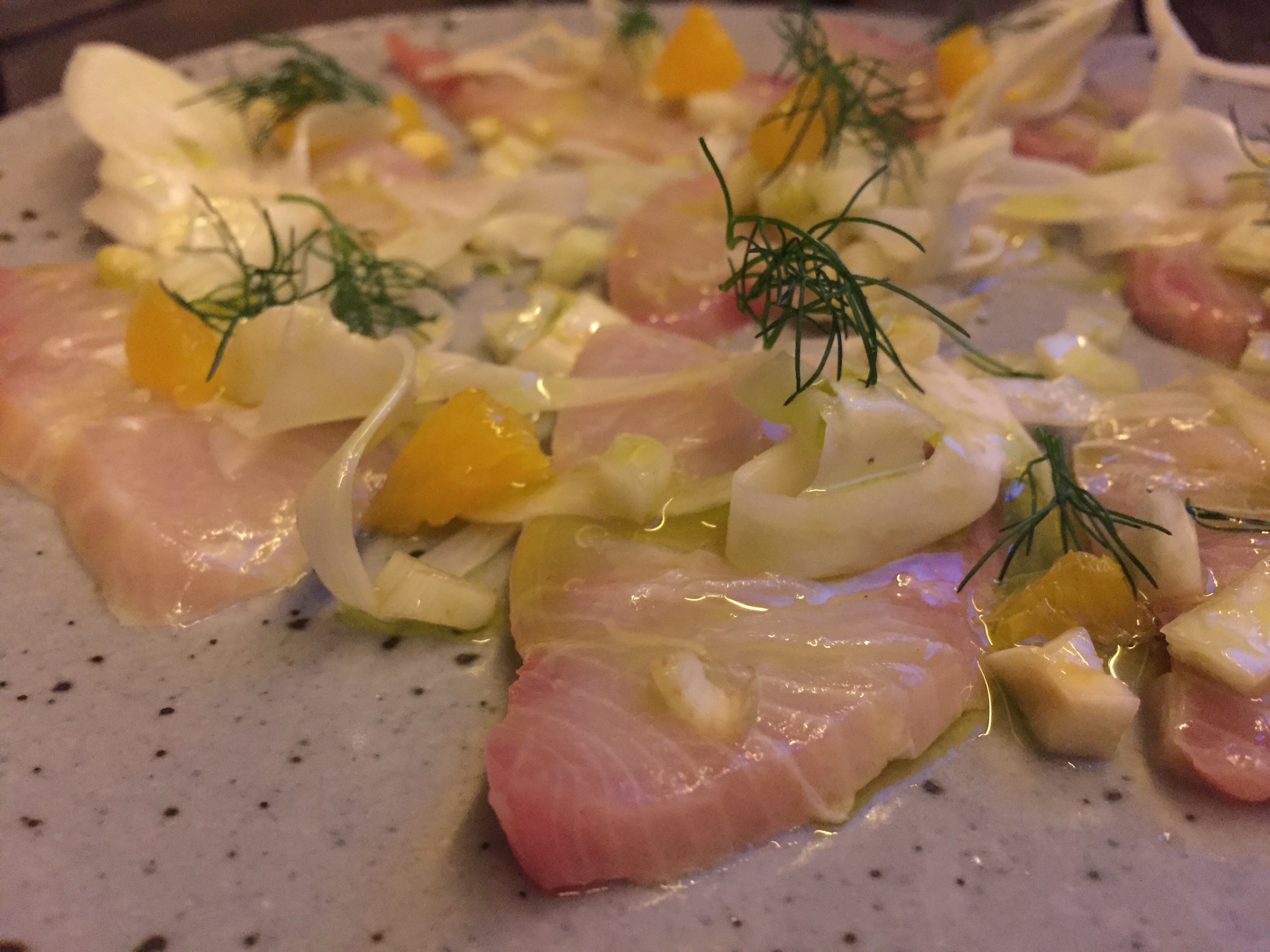 There were 8 pieces of kingfish in total. 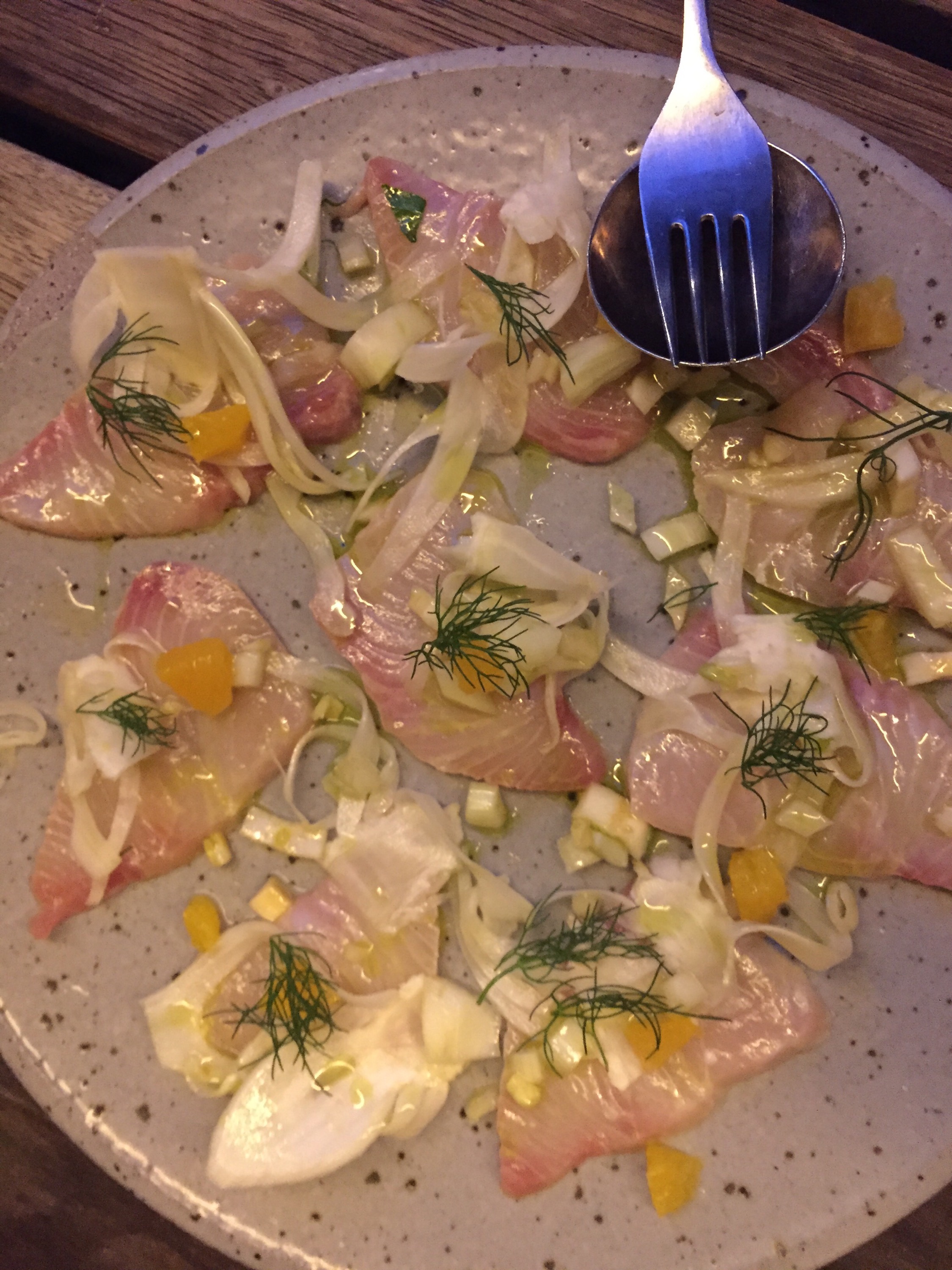 Boxgum Grazing pork belly, butifarra negra and smoked koblrabi ($24.00). I didn’t really understand half the ingredients but when I saw ‘Boxgum Grazing pork’, I knew I wanted this dish. This dish came with four pieces of delicious pork belly that had the right amount of fat to melt into your mouth. Only some of the skin was crispy but it was seasoned perfectly. We had taken bites out of the ‘crisps’ looking things which we guessed was possibly koblrabi after some googling, it was crispy and juicy but had  bitter aftertaste like a radish. It didn’t really add much to the dish but if it was also made into the base puree, it was wonderful. I’m not a huge fan of blood sausages but the butifarra negra had a nice taste, although it did have a slightly chewy odd texture. 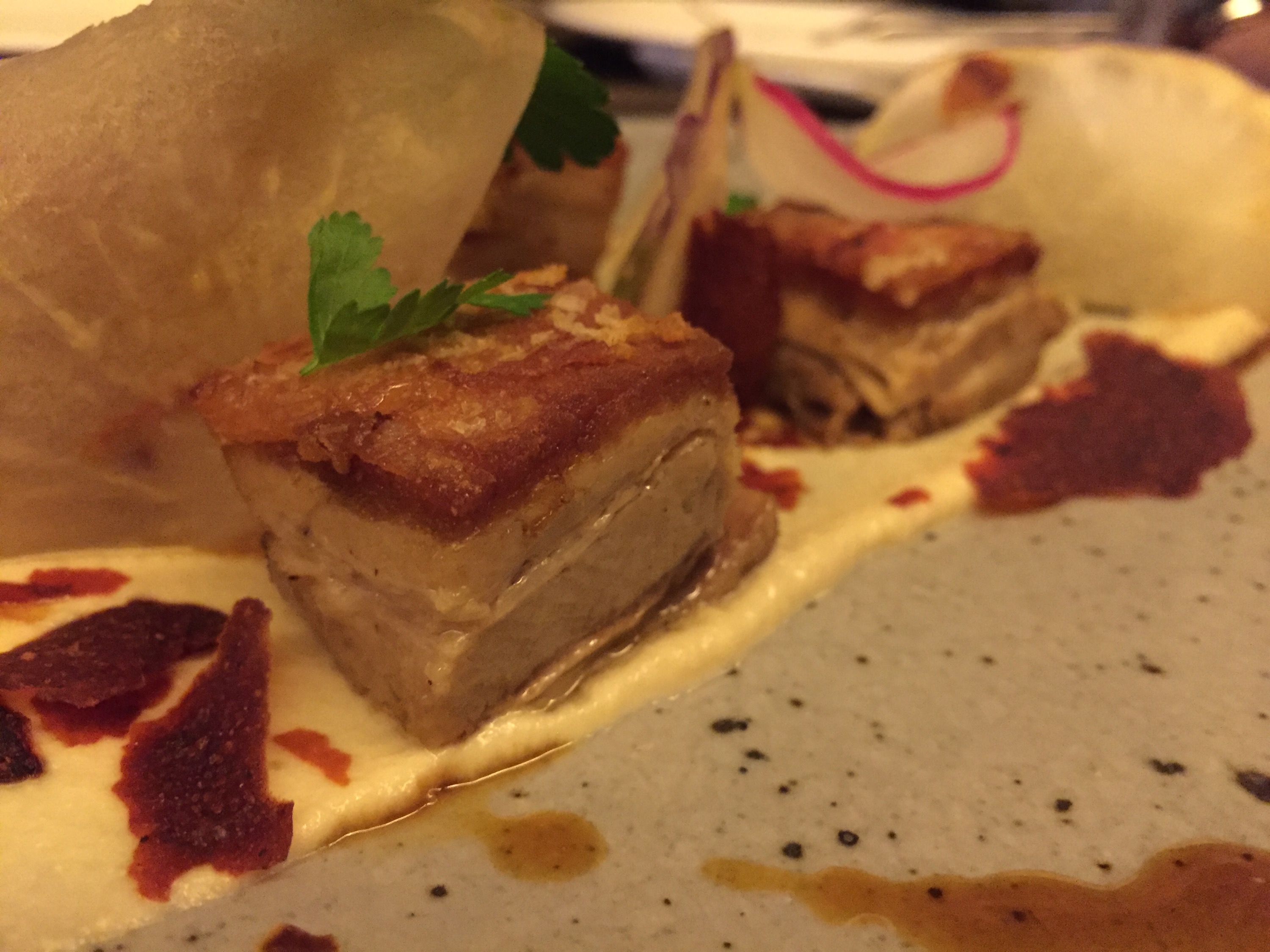 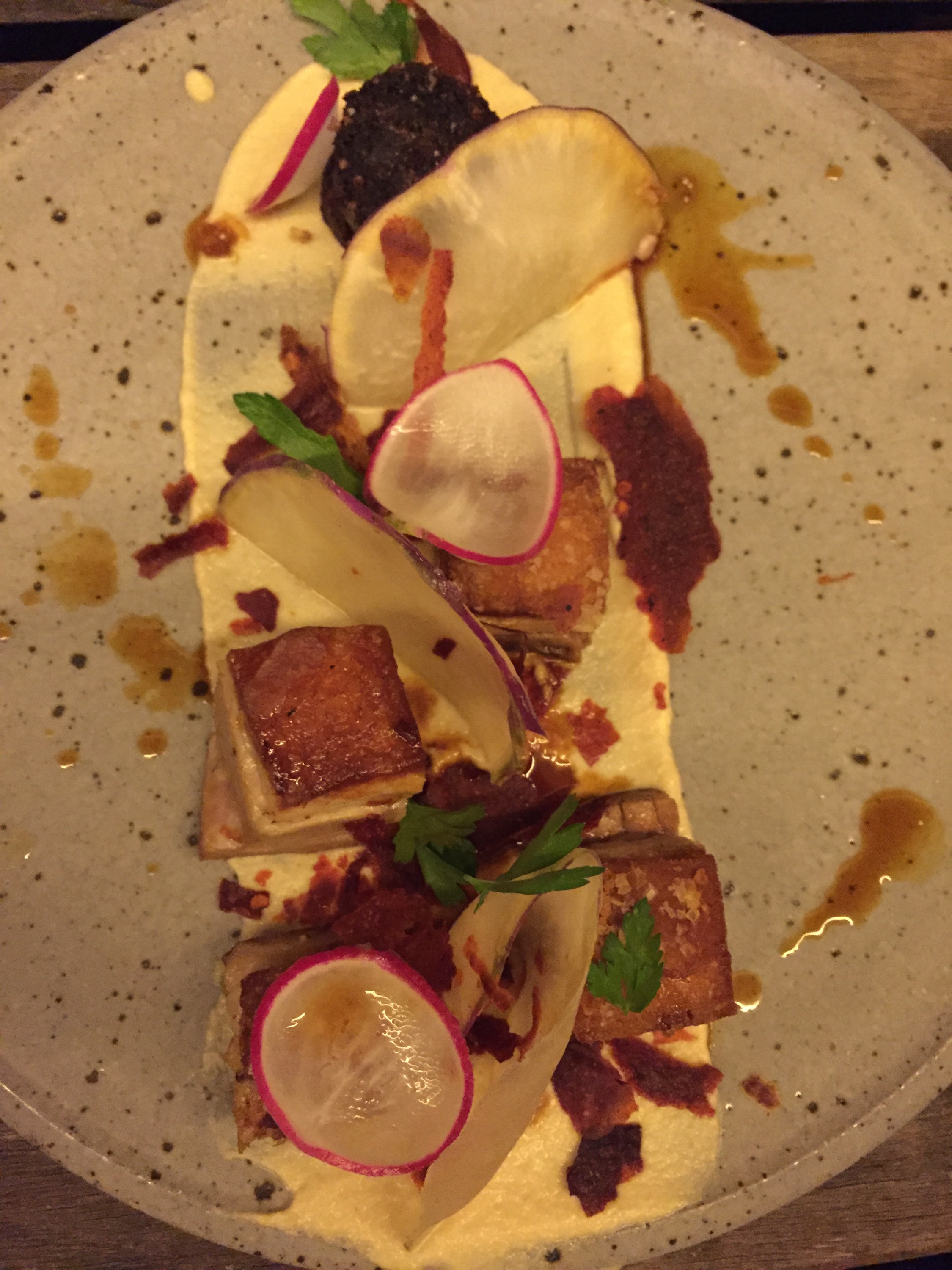 Lamb shoulder, smoked yoghurt, pomegranate and kale chips ($26.00). We all agreed that this was the favourite dish of the night. The lamb was so tender that it was almost effortless to divvy it up into four portions. True, all the elements helped make this dish fabulous but the meat itself was the star of the night. 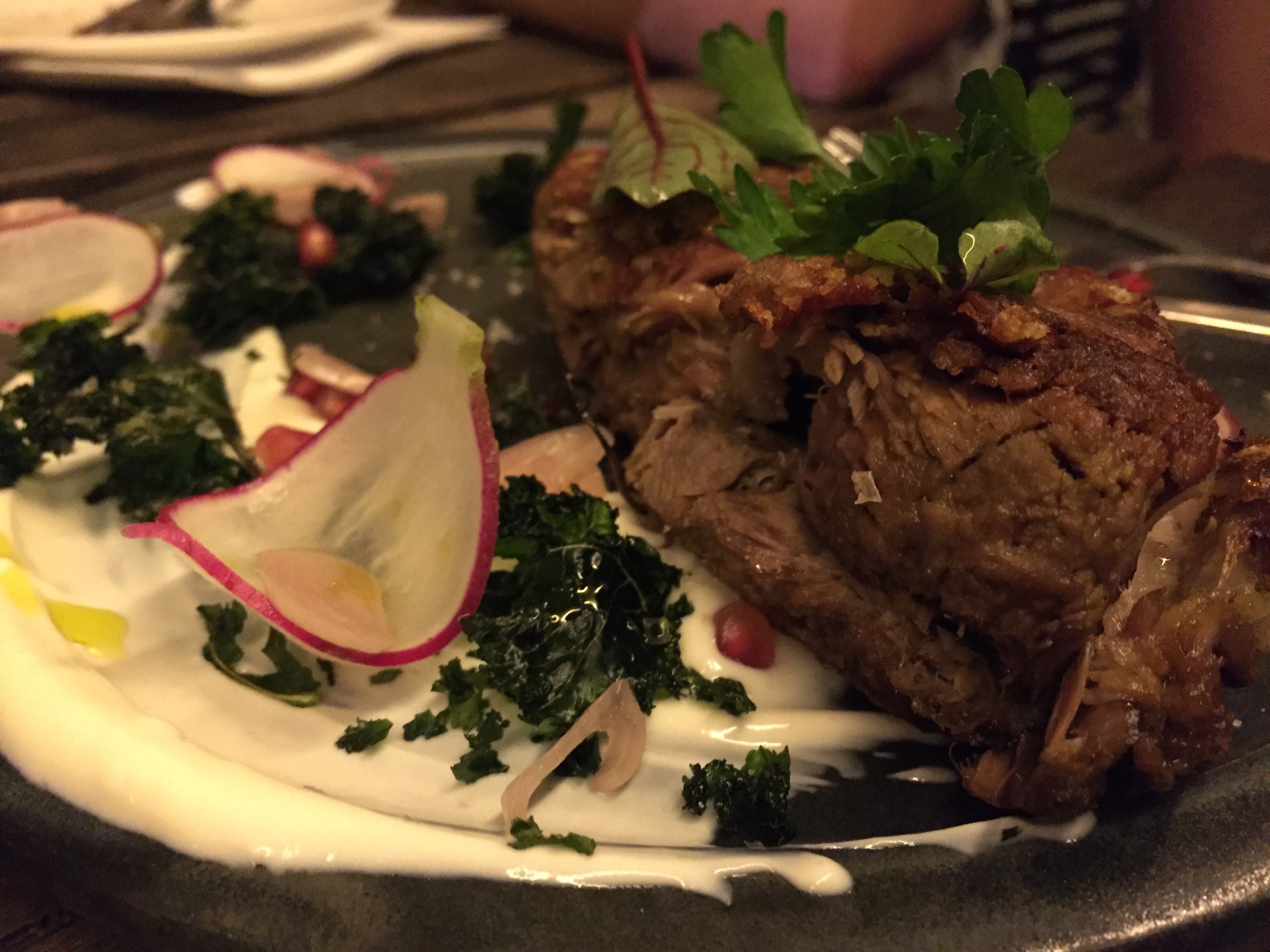 The service was always prompt, friendly and attentive while the dinner atmosphere was very relaxed; it was a perfect night to sit outside and catch up with friends (BYO for all those wondering). The waitress suggested order to 1.5 dishes per person but we ordered a lot less after the end of a very busy eating day for me. The menu is very limited but is currently changing with the seasons and produce available. I’ve always enjoyed the food here, just keep in mind it is Canberra hipster prices and portions.

One thought on “Fun filled weekend – Močan and Green Grout ”