It had been just over a year since I had last been to XO in Narrabundah and I was about eleven months overdue for a revisit. With a promise of fabulous company and new dishes on the menu, I booked for the next free day everyone was available.

Shantung bao twice cooked pork belly with cucumber, pickled daicon and ginger ($8.00 each). It might seem steep to pay 8 bucks for a bao but it is worth every cent. The pork belly is a thick cut but very tender; the meatiness is balanced by the vegetables and the bao is super soft.

The baos are teeny tiny but mighty tasty.

XO FC wings marinated in butter milk with kewpie mayo ($10.00). I love chicken wings and if you fry it, I will come! These were really crunchy while remaining succulent and I love mixing the mayo with their modified sriracha sauce.

Steamed dumplings minced prawn and pork with spicy soy vinaigrette ($16.00). These were so delicious, we ordered another serve just before we started on desserts. A delicate steamed parcel in a beautiful spicy soy which made it very hard to share with other people.

Vanella stracciatella dressed with tomato nam jim, granny smith apple, crushed peanuts and crispy shrimp ($18.00). This my friends….Was the dish of the night for me and that is a massive call since I also ordered Asian bolognese. To be honest, I didn’t pay attention to anything else on the menu once I confirmed that my old favourites were still there. TimmyC suggested we get this dish and I casually dismissed it aside allowing him this as his ‘one’ while I chose 5 other plates. It is difficult to describe this dish, it was a mix of stretchy cheese, different flavours and crunchy textures. You MUST order this!!!

Asian bolognese stir fried udon in XO chicken ragout with a 60° egg ($18.00). This dish was the sole reason I came back to XO, I’ve been having dreams about this ever since I had it the first time. I think it is genius to use udon!

Shallow fried tofu shallow fried tofu seasoned soy and candied ginger ($16.00). I can see how this was supposed to be a simple tasty dish with a ridiculously soft tofu but I found it underwhelming in comparison to the other dishes. 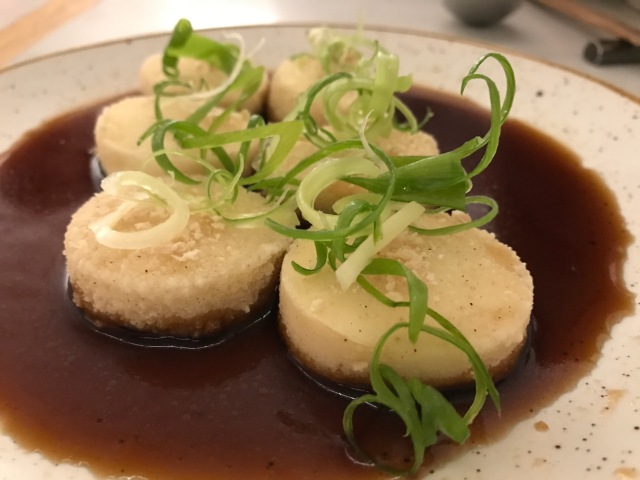 Hiramasa Kingfish miso cured with pineapple relish, wasabi nori, spelt and freeze-dried raspberry. Kent was nice enough to treat us to one of their new dishes on the menu, this would have been $18.00. It was interesting to have the Kingfish served in cubes, the curing processing apparently makes the flesh ‘tighter’ and it gave the dish a very meaty feel. This is a dish where you have to eat all elements together; the wasabi nori had a kick but the pineapple made it very sweet and it seemed like we were eating a sushi without rice.

Prawn Kapitan spicy Nyonya style curry with wok fried king prawns ($34.00). The prawns were really fragrant and tasty but I was hoping for more of a sauce to mix into my rice.

Crispy lamb ribs tossed in a sticky plum sauce ($28.00). A popular favourite amongst the table, it is a little messy to eat. Ditch the chopsticks and just use your hands. 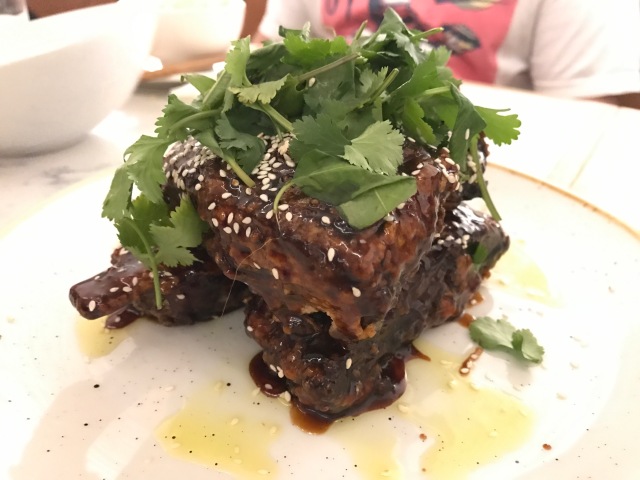 Cauliflower nuggets fried with mixed spices and mint yoghurt ($12.00). I was hit with a strong taste of cumin which probably would have been offset by the yoghurt but the bowl got taken away before I could go back and smear some on.

Chrysanthemum tea soft serve ($5.00). I knew when I made the restaurant booking that I wanted this for my dessert, I was just hoping that they still had it. Anyone that has had a chrysanthemum tea popper growing up, this is exactly that flavour in soft serve form. I encourage all those who have not tried chrysanthemum tea to order this, although I  don’t know if they still  have it on the menu because they have just released a watermelon szechuan and sumac soft serve yesterday.

Black rice pudding coconut ice-cream, golden honeycomb  and lime meringue ($14.00). I love this dessert but I  was surprised to see that the desserts had not changed for a year. Chef AK explained for these popular desserts to be replaced, it would have to be just as good but he assures me that something is in the works.

Pandan panna cotta gula melaka syrup and sesame tuile ($12.00). The panna cotta isn’t really sweet and all the sweetness comes from the intense syrup. The texture was super smooth which was a good contrast with the crunchy tuile. 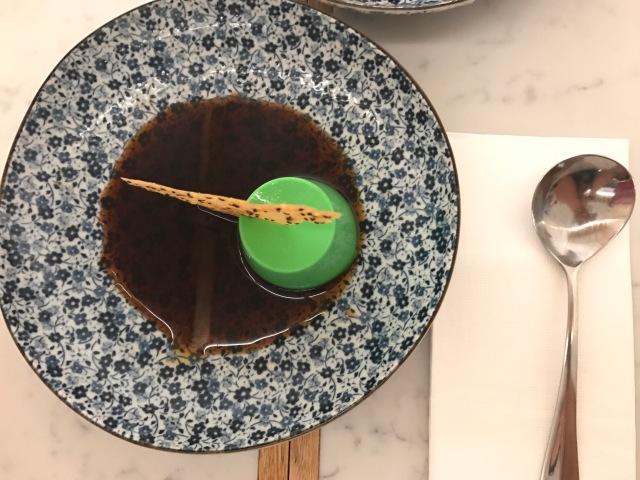 They might have turned down the volume dial on the music but they still play the music that I love. The staff was attentive and everything came out a timely manner.

One wonders why I’ve stayed away for so long but since the three days of not being there, they have already released a new soft serve flavour and there will be new dishes released in December. Looks like I’ll need to head back there ASAP.