I wanted to take my visiting friend somewhere local and awesome for brunch with good coffee and Red Brick Espresso had something that appealed to each of us. We were lucky enough to get a big spacious table inside and we excitedly browsed through the menu.

Coffee. Everyone really enjoyed their coffee and TimmyC went back to get a second one.

Salted caramel milkshake ($6.00). This didn’t have a strong salted caramel taste and I’ve had better at other cafes. 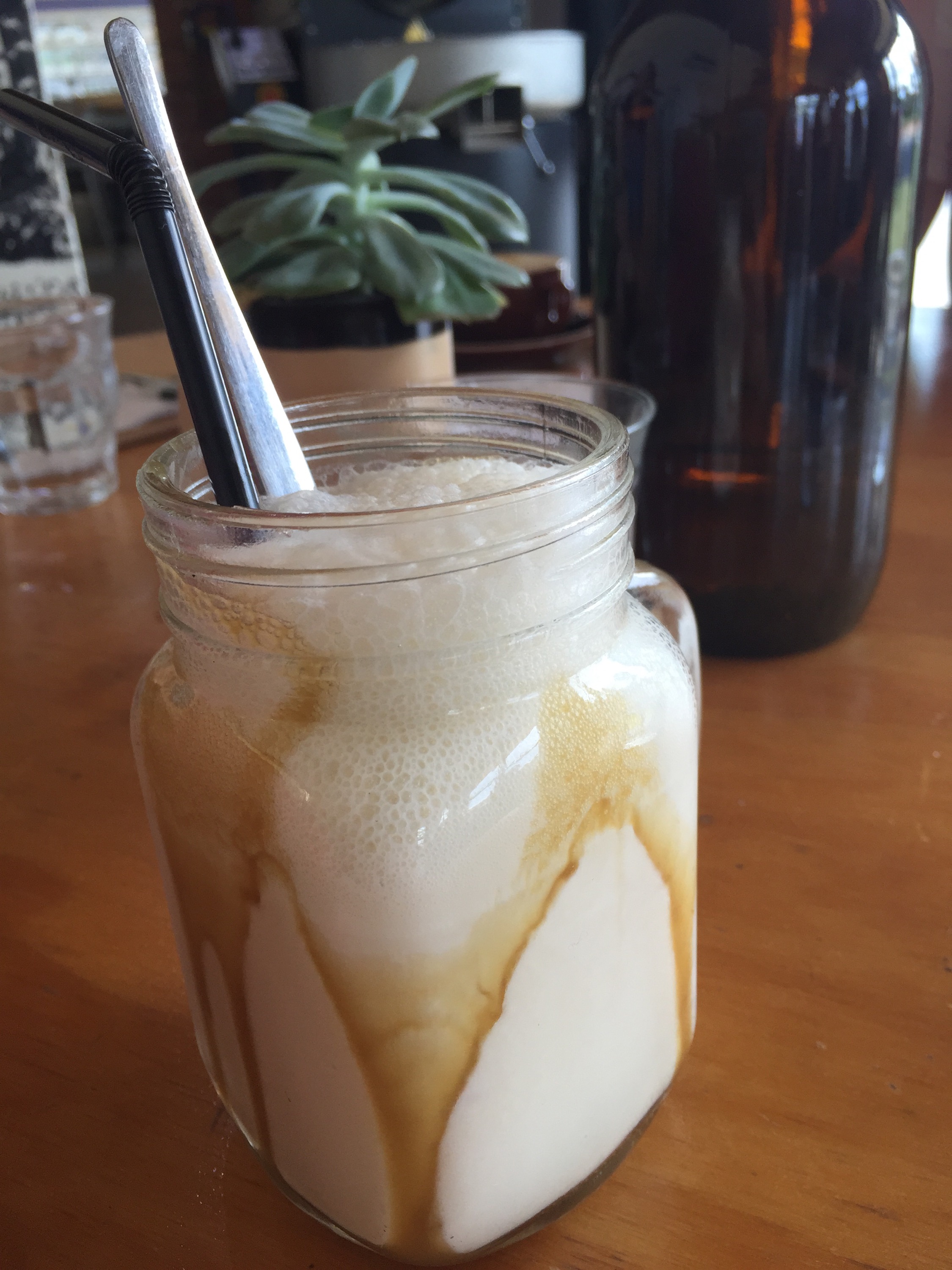 Red Brick Phylli Cheese Steak with pulled beef steak, sautéed mushrooms, caramelized onion, swiss cheese and Dijon mayo ($12.90). This sounded like all my favourite things on a roll but when I received my order, it looked like it was majorly burnt. I was going to complain but I thought I would taste it first and despite its black charcoal surface, it did not taste burnt. It did however lack some salt and I found the whole dish underwhelming.

When I saw this burnt looking sandwich, I didn’t have high hopes. 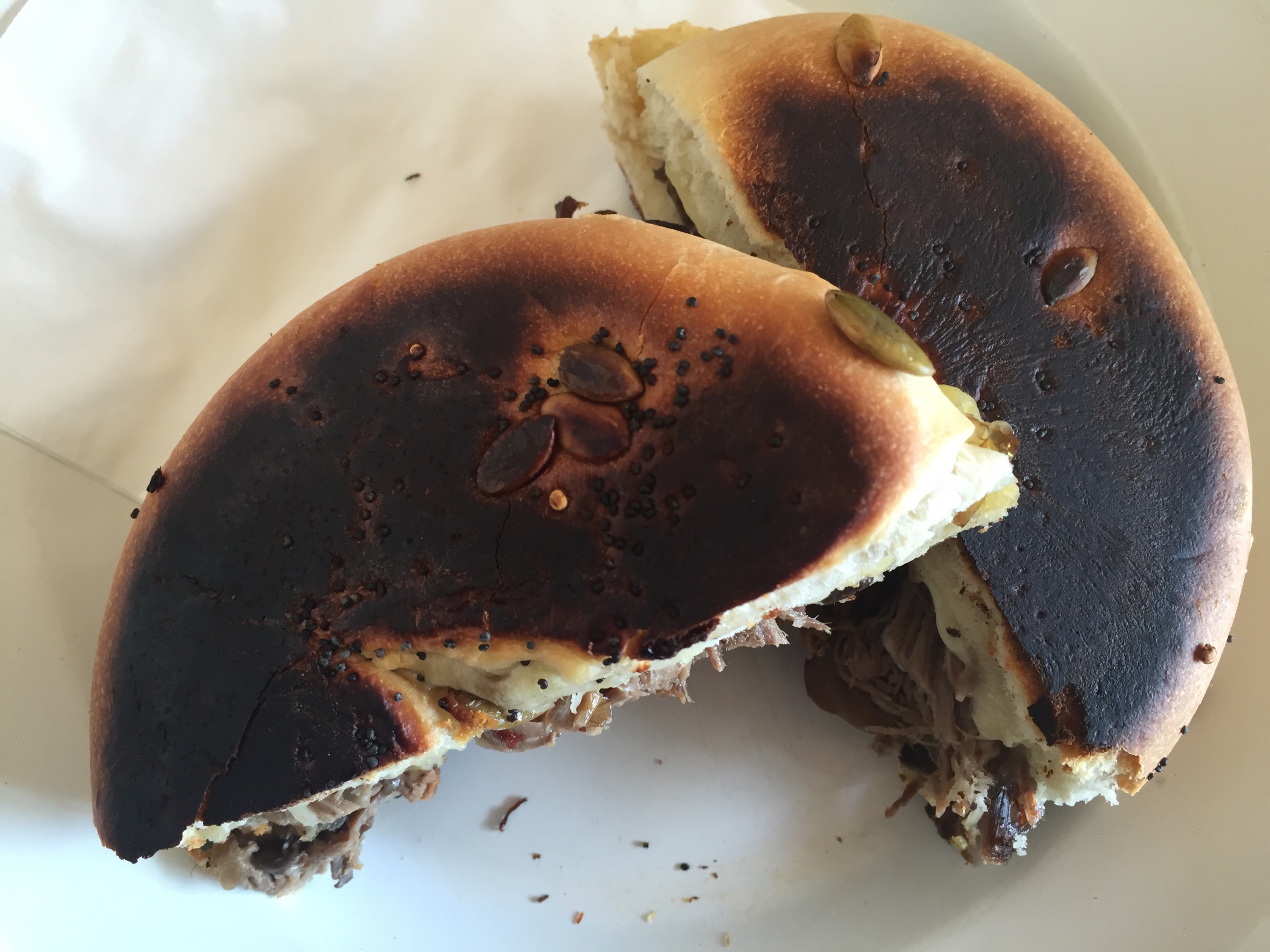 Pulled pork and apple slaw burger on a brioche bun with a dressed leaves side salad ($15.90). I felt bad for TimmyC when Red Brick no longer had waffles available, as that was the dish I lured him here with. He chose this as his second choice and they informed him at our table that there is no brioche and that they were substituting it with sour dough. The pulled pork was nice enough but they drowned it with a lot of BBQ sauce.

I was pretty disappointed with this brunch and felt bad that I chose it. Red Brick Espresso has an extremely limited kitchen facility and I guess I shouldn’t expect so much from them but then again they have chosen to put these dishes on their menu. I think this is a place for good coffee, I’m hoping the food will improve because I’ve liked their brunches previously.

Same people, must be just supplying to other cafes. I had a cupcake from the Sweet Bones store previously too, I didn’t like it. Maybe they are getting better? Or I just got lucky with the flavour this time.

On a lovely sunny day which reminded us that Spring was on its way, I grabbed my friend visiting from interstate and headed to the Red Brick Espresso that was recommended to me for good coffee. I was happy to find it open because I didn’t check their opening hours (even though Urbanspoon said that they don’t open Sundays?) but apparently everyone else thought it was a good idea too because there was not a single available seat.

After looking a bit lost while holding a menu and looking around for any potential vacating patrons, a friendly face said that she could set up some milk crates near a table so we could sit. Thank goodness a table left before we ordered because I don’t care how trendy it is to have milk crate seating, it ain’t comfortable.

A small cute cafe makes it hard to get a seat.

Sweet bones raspberry and chocolate vegan cupcake ($5.00). Moist and delicious although I couldn’t taste much of the raspberry. I was amazed it cost so much but it sure was tasty.

Large flat white and a hot chocolate ($4.00 each), My friend said that the coffee was really good, which I was glad because we were on a coffee hunt mission.

The hot chocolate wasn’t particularly sweet and I had to add sugar but I did like the pretty foam art.

Moroccan style baked eggs with Persian feta, fresh herbs and toasted sourdough ($13.90). Looks like something you would find at a trendy cafe in Melbourne. I loved the bread as it was perfectly toasted and wouldn’t break your teeth. The roasted peppers which were almost caramelised, gave a sweetness which was balanced out by the salty feta. A great breakfast by far that I have had in Canberra in a long time.

A very child and dog friendly as everyone had at least one of the two in the surrounding tables. Great to see local shops have a good cafe with great coffee that you don’t have to go to Fyshwick or Braddon for.

Finally, a great place to brunch in the Woden area, definitely worth a visit!

It wasn’t that long ago that I had noticed the considerable positive change in the staff’s attitude at Delissio Brasserie and I was keen to see if the same had happened at Delissio in Curtin. We were greeted by a smiling friendly face who was kind enough to open the door for us as we entered the restaurant. A good start!

One of the first things I noticed was the new style of menu with lots of changes but still thankfully had some ‘old but gold’ dishes remained on there too. The menu had only been out for a couple of days and I was excited to try something new.

Specials board: Pork with parsnip puree and muscat jus ($15.00) I was completely blown away by this! The pork was perfect and had just a hint of fat under the crispy skin and I made sure I scraped as much of the parsnip puree onto my fork as I could.

Zucchini Fritti haloumi, cumin and shallots, topped with paprika yoghurt ($10.00). I thought they were a little undercooked on the inside.

Linguine Oceana prawns, calamari, market fresh fish, tomato, garlic, chilli and parsley ($28.00) You think we would get bored of this dish but we don’t. Cooked well today and not bland at all.

Penne Delissio bacon, chorizo, capsicum, olives in a light chilli tomato sauce ($24.00) My friend reached for the cheese before I reached for my camera.

Canneloni Bolognaise braised beef in red wine, oregano and tomato ($24.00) I opted to try something from the new menu. The beef was very tender but I found the tomato based sauce very intense. It would have been balanced out by the melted cheese but the cheese flavour wasn’t strong enough, but luckily I had more of a cheese taste in my last mouthful. I don’t think I would order this again.

Overall I had a fantastic lunch despite a few of the dishes. The atmosphere amongst the staff has really improved and it is now a lot more attentive. I want to come back during dinner service to see how they go and of course try more of their delicious food.

My friend and I very much enjoy our pastries, so when she recommend that I go to Curtin bakery and grab a vanilla slice, I went at the next available opportunity.

With all the choices available, I had to stay focused, after all I just came straight from Wild rye bakery!

This was like 90% custard, the way a vanilla slice should be!

They have opted for a more traditional passion fruit icing which sweetens the slice just enough. The only trouble is taking a bite without it spewing out the other end.

Sometimes you just need to get away from work and go out with good company for some good food. Delissio restaurant and bar in Curtin is tucked away in quiet suburbia and it was only serendipitous that I found this place years ago when my friend got lost and we happen to drive past it.

Sichuan calamari with mandarin aioli, pickled cucumer and radish salad ($14.00)– it was a bit salty but had lots of flavours of different spices and it went well with the roquette and salad.

Duck bruschetta ($10.00) Nothing too special but the duck was tender.

Fritii vedura lightly fried vegetable fritters with haloumi, cumin and shallots, side of cucumber yoghurt ($8.00) delicious fritters but I couldn’t tell that there was haloumi inside.

Linguine pollo formaggio chicken breast with chilli, garlic, onion, spinach, fresh tomato and ricotta ($19.00) lots of chilli today which my friend loved but maybe too much for some other people.

Linguine oceana prawns, calamari, market fresh fish, mussels and scallops, garlic, parsley, tomato with a hint of chilli ($24.00) I try to order different things when I come here but this is a dish I always come back to and sometimes will even crave for.

Blackboard special- Black forest meringue ($14.00) We weren’t planning on getting dessert but I was able to convince my friends to share this one with me. This was rather disappointing, you can’t just add cherries (they tasted like they were from a can) and then call it black forest. The meringue was really hard and it shattered everywhere when we eventually cut through it, it wasn’t chewy and soft at all, although the chocolate mousse chunks was nice.

I come here for the good food (I also love their pizza and reef and beef), the atmosphere during a birthday, but not for the service (and I do understand they get very busy and it’s not always bad). During the lunch service I found the service pretty inattentive given the amount of people in the restaurant and the two waitresses spent more time talking to each other than seeing our waving arms to get their attention. They are lucky that I enjoy the food so much to keep coming back.

When I was invited to a birthday dinner at a venue I’ve never even heard of before I was so excited and I’ve never eaten Nepalese food or been to Curtin shops so I was doubly excited! The Hungry Buddha is very new restaurant located down stairs next to the chemist at the Curtin shops and has only been open for three short months.

“The Hungry Buddha offers a wide range of authentic Nepalese cuisine as well as dishes from India, Malaysia and southern Asia. All of our dishes are prepared in the traditional Nepali style giving them the true flavours of Nepal.”

Simple decor in a spacious room.

MoMo dumplings (6 per serve) Traditional Nepalese steamed dumpling served with homemade sauce; chicken with mixed vegetables($9.00) The dumpling wrapper seemed a little thick or there wasn’t enough filling inside, it was still nice though.

Vegetarian samosas (2 per serve) (V, DF) Homemade cone pastries stuffed with lightly spiced potato and mixed vegetables served with tamarind sauce ($8.00) I didn’t get to try one but other people said it was tasty, I did taste the sauce and that was really nice.

Pictures may be deceiving but here is my hand as a reference point (p.s. I don’t have big man hands or anything).

Daal Bhat A traditional Nepalese set dinner of rice and daal (lentils) served with a choice of meat (goat, chicken or beef) together with a traditional vegetable dish and pickle ($23.00). I went anti-social and chose the platter because I really wanted to try a bit of everything (I did share though). I had goat as my choice of meat but it could have been lamb or beef and I wouldn’t have known the difference. I feel you get a lot more variety by choosing the platter and I wanted to try something ‘Nepalese’ rather than that of the neighbouring Asian countries. I particularly liked the daal and goat curry.

Eeep! It wasn’t until now that I realised I didn’t take a photo of the butter chicken that we ordered, I was probably too busy eating.

Butter chicken (GF) Boneless pieces of chicken marinated in traditional north Indian spices and cooked in butter and cream ($19.00) It was nice, not the most special memorable butter chicken but both servings did get devoured very fast.

The service staff was very attentive and it wasn’t a long wait for our food even though we were the biggest table during that seating. I would come here again to try more from the menu as well as support them during the month (and a bit) for Street Smart, which I think is a fabulous cause.

One of a few ACT restaurants participating in Street Smart between 14 Nov to 24 Dec2011.