I had been here previously for a lunch banquet but I didn’t get around to posting about it (and I’ve been reminded ever since – thanks Thomas), so when I couldn’t get into Wild duck for dinner, I knew the next best thing – Mr. Wei’s in the city.

I knew it was a shaky start when I had booked that afternoon and they said ‘see you tonight’ but when I arrived several hours later they were confused about/lost my booking for three people. It didn’t matter, it wasn’t booked out and after being asked by four staff if I wanted a table for three in a short succession, we were led to a table by the window (I don’t think their English is that strong). 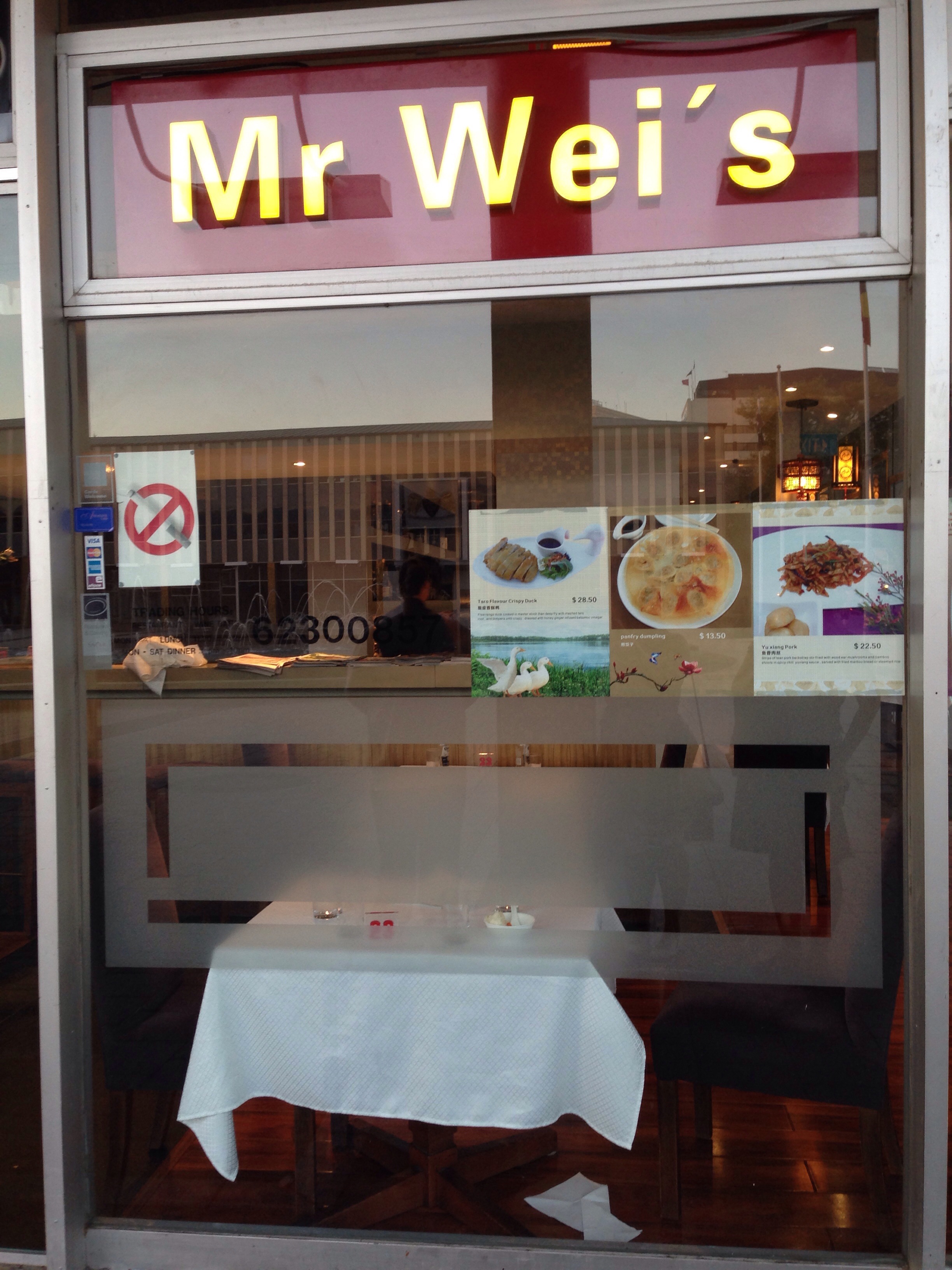 The lanterns are very cute when they light up at night. 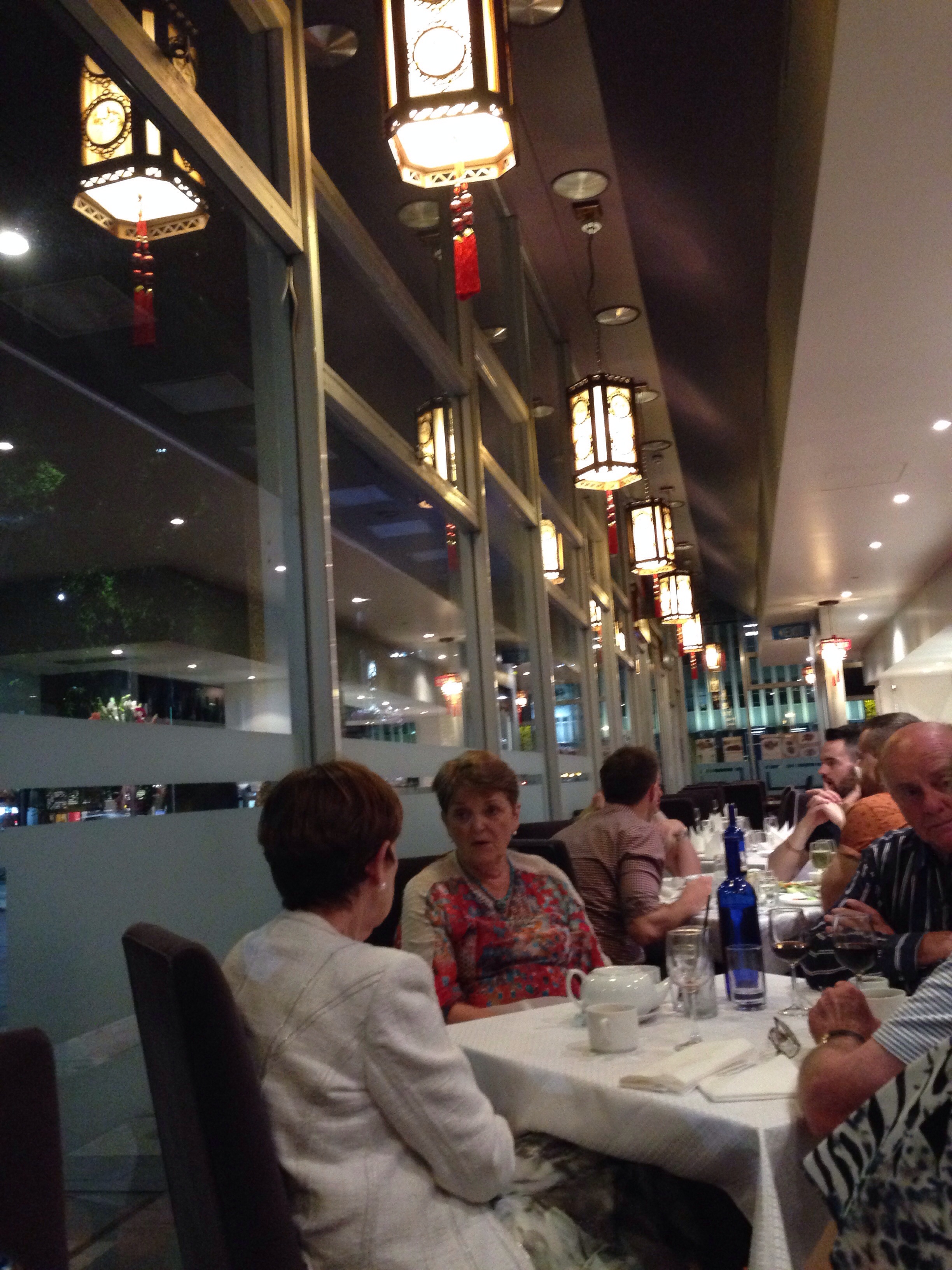 Pan fried pork dumplings ($13.50). These pot stickers had little crunchy bits around each dumpling, it could have been a tad crunchier but the filling had a little bit of ‘soup’ inside which I really liked. 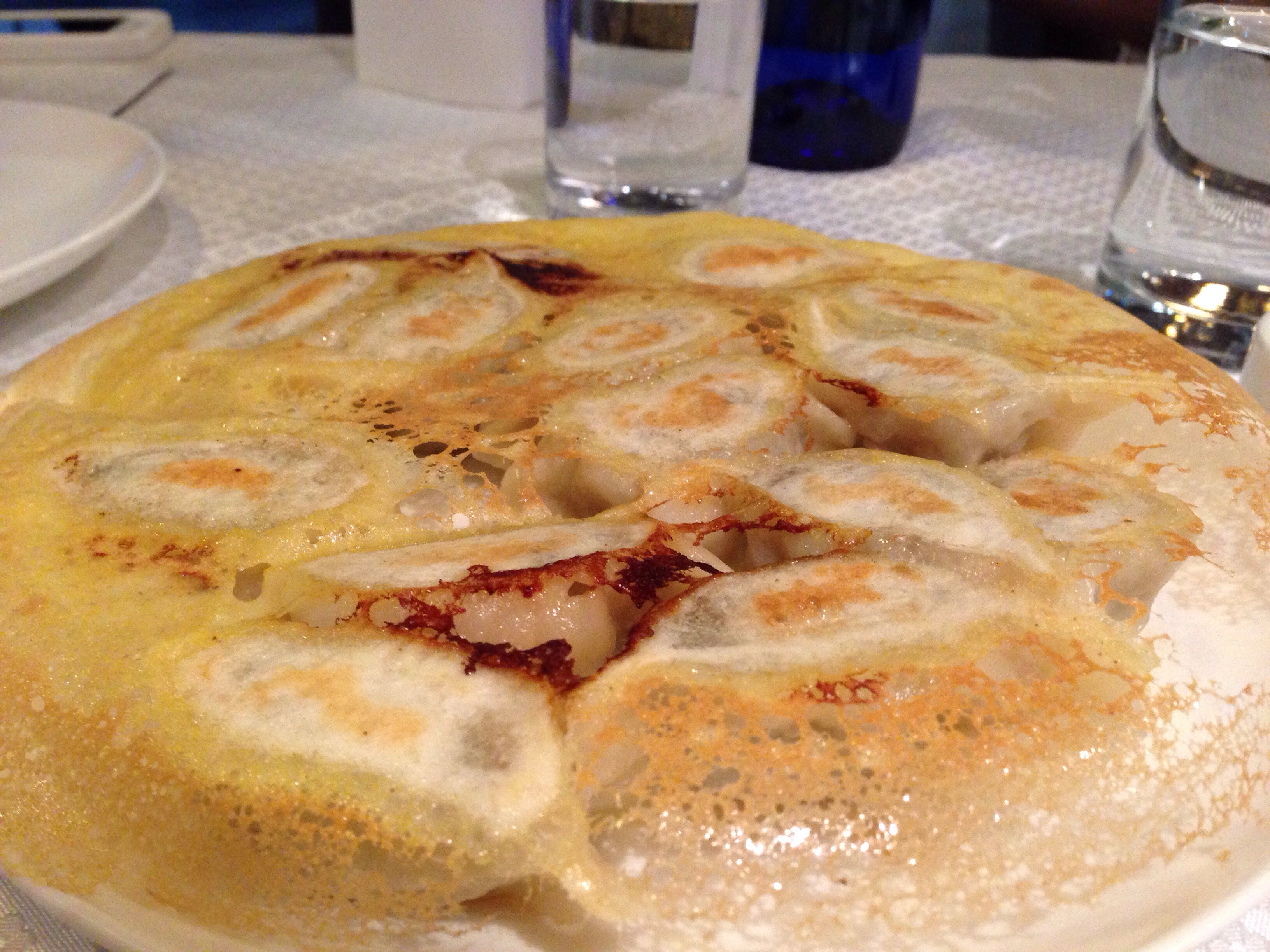 A tasty filling with pork and shallots. 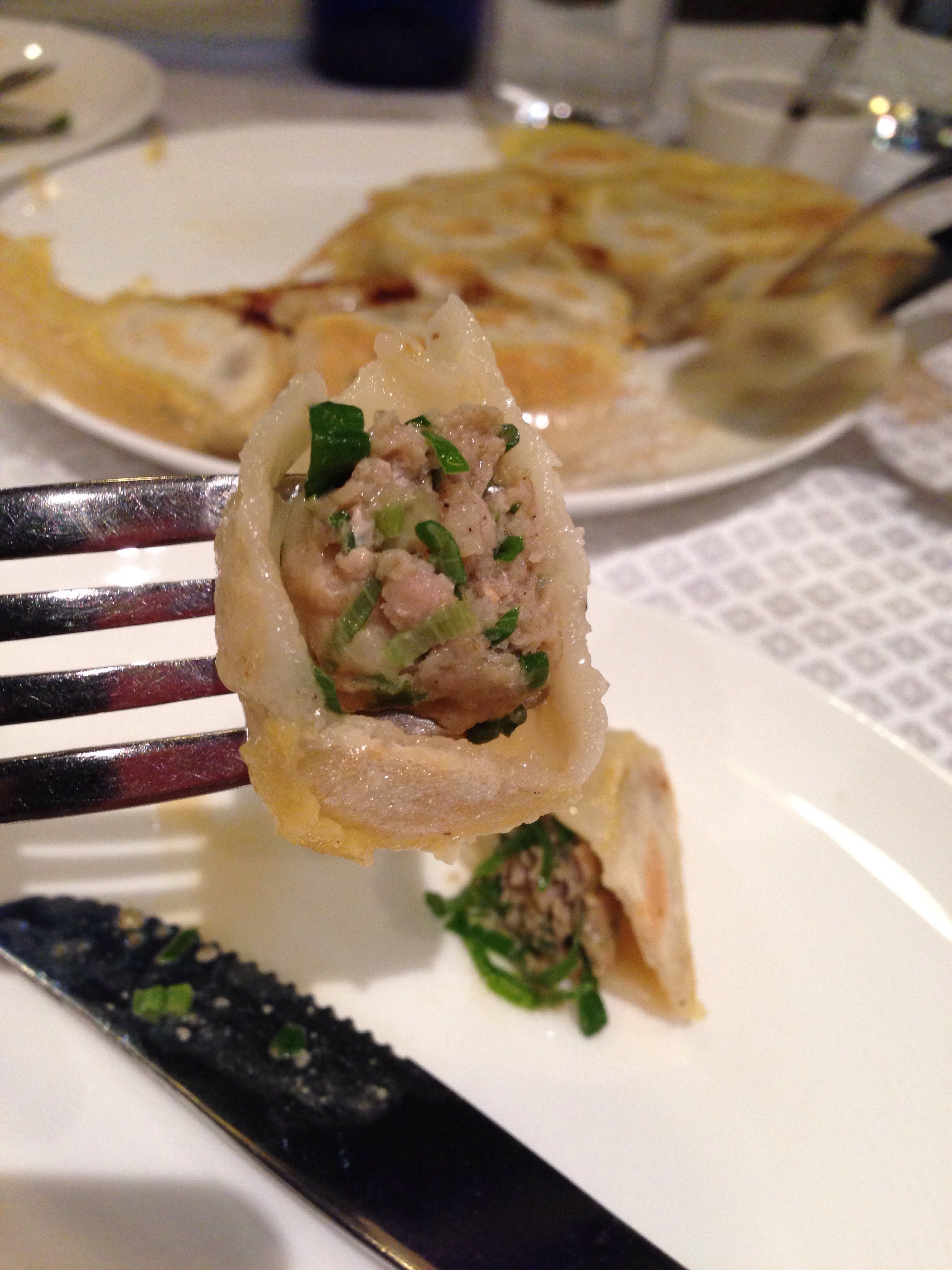 Signature dish Beijing roast duck – duck pancakes served with pancake, hoi sin sauce, shallots, cucumber and duck fried rice (half a duck $48.90). They give you a dozen pancakes for half a duck and that meant between the three of us, we get 4 each which was a good amount. Usually with duck pancakes, the duck portion is more skin than meat so I found it intriguing that there was so much meat on the duck pieces and not much skin. A lot of the duck flavour comes from the skin and as delicious as all this looked, I feel that I’ve had better duck at other places and the duck could have been better and served with more skin. 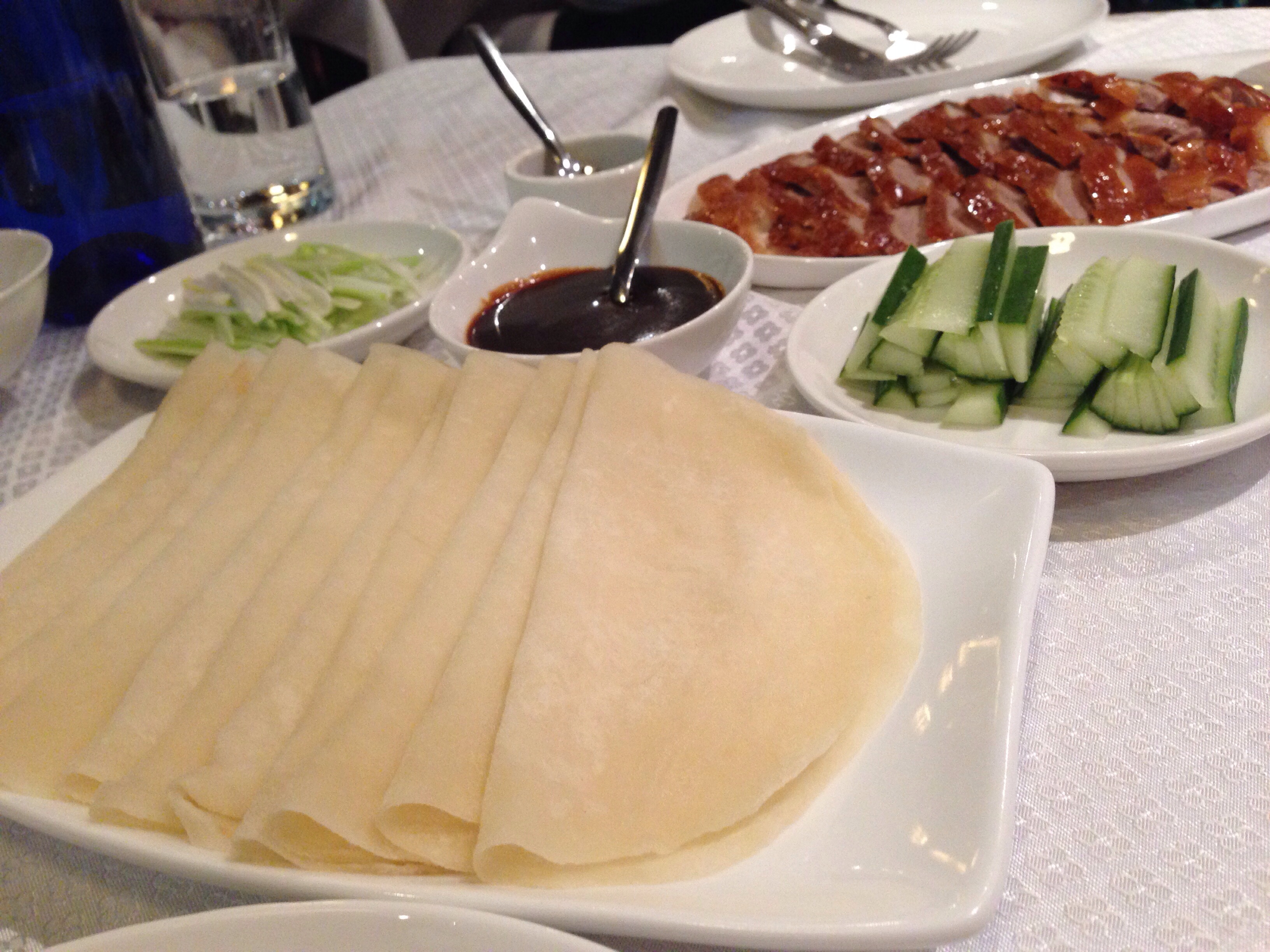 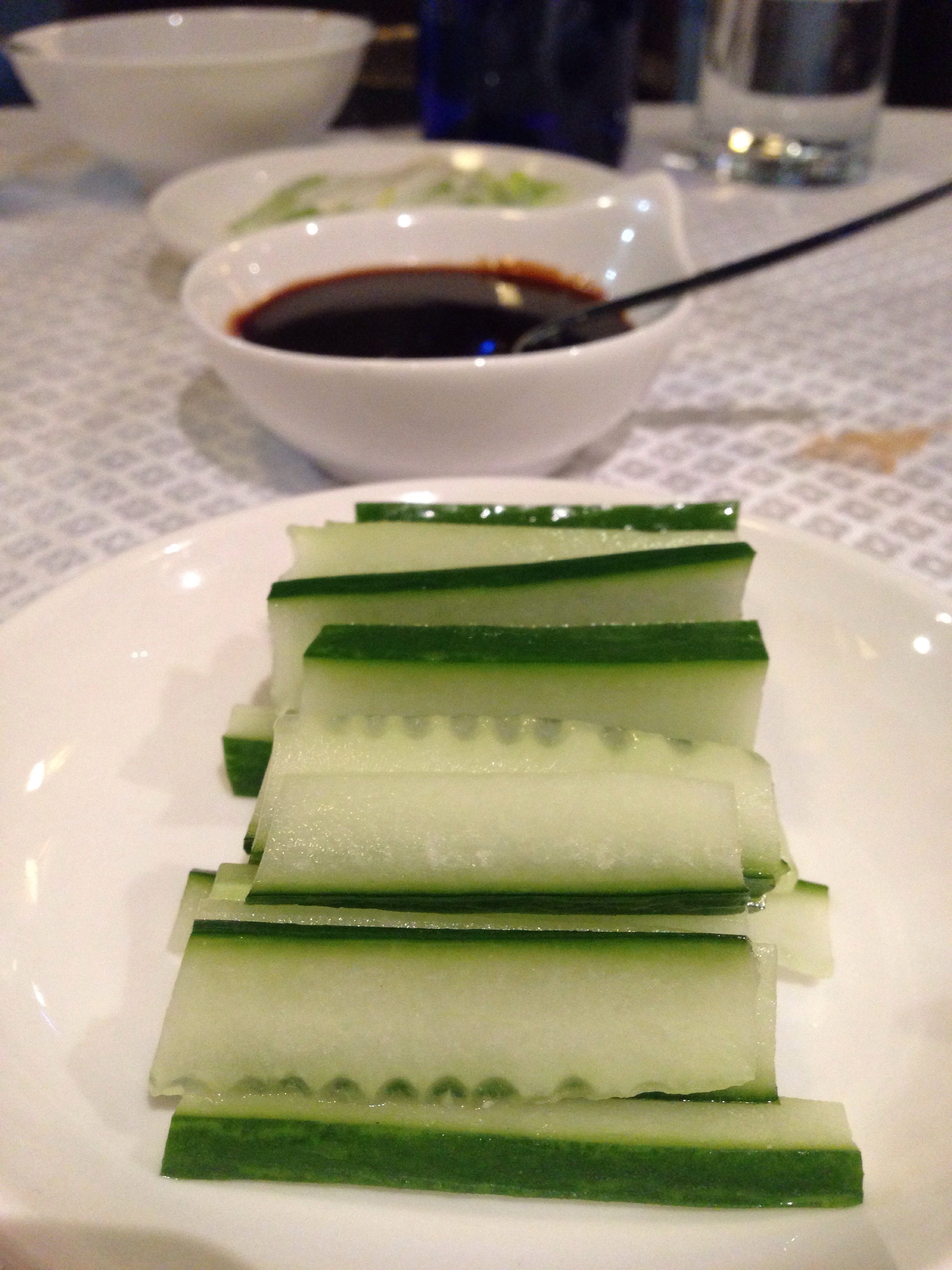 The duck pieces were where served on a duck shaped platter. 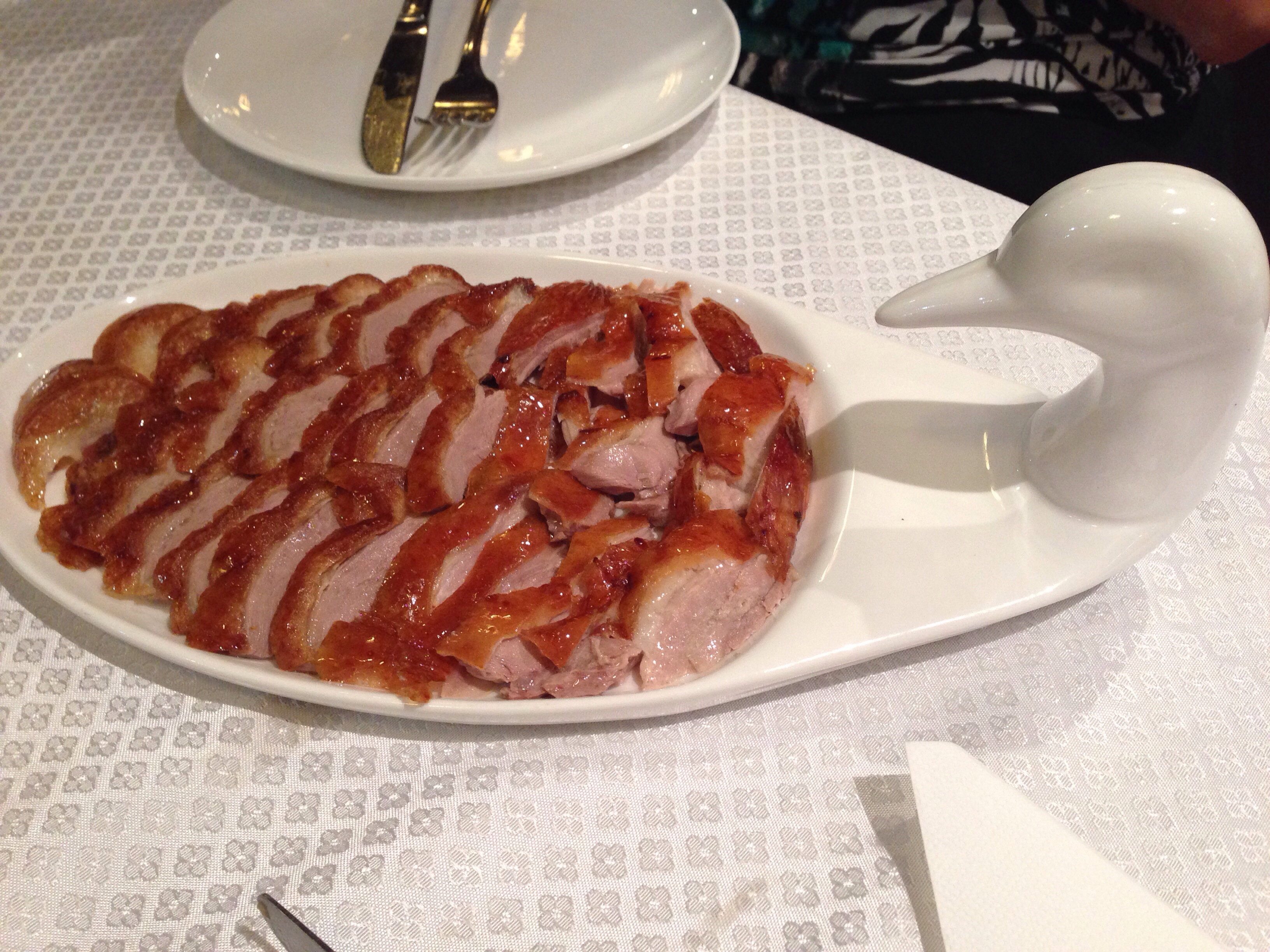 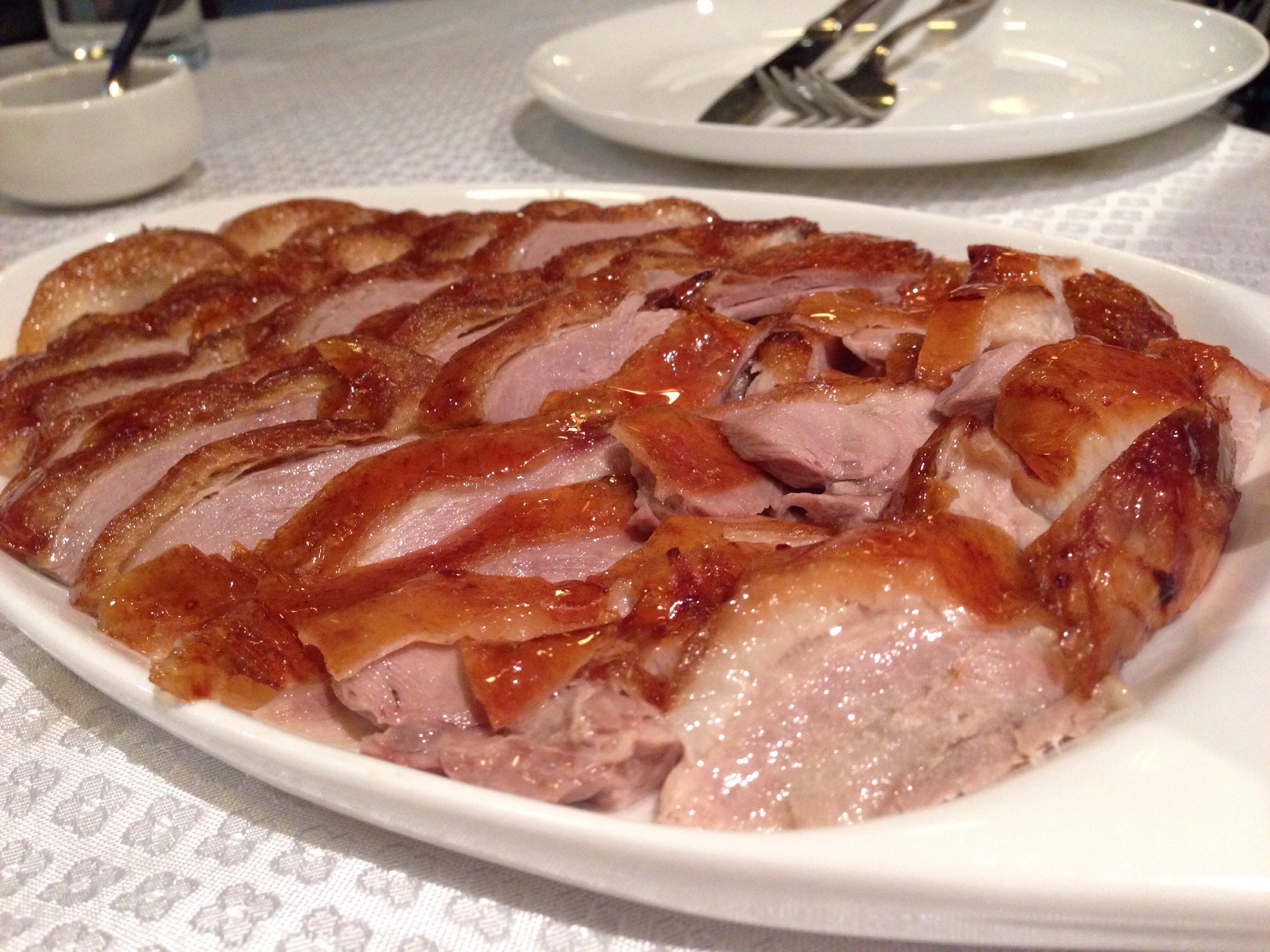 Add a bit of everything and it becomes a great few mouthfuls. 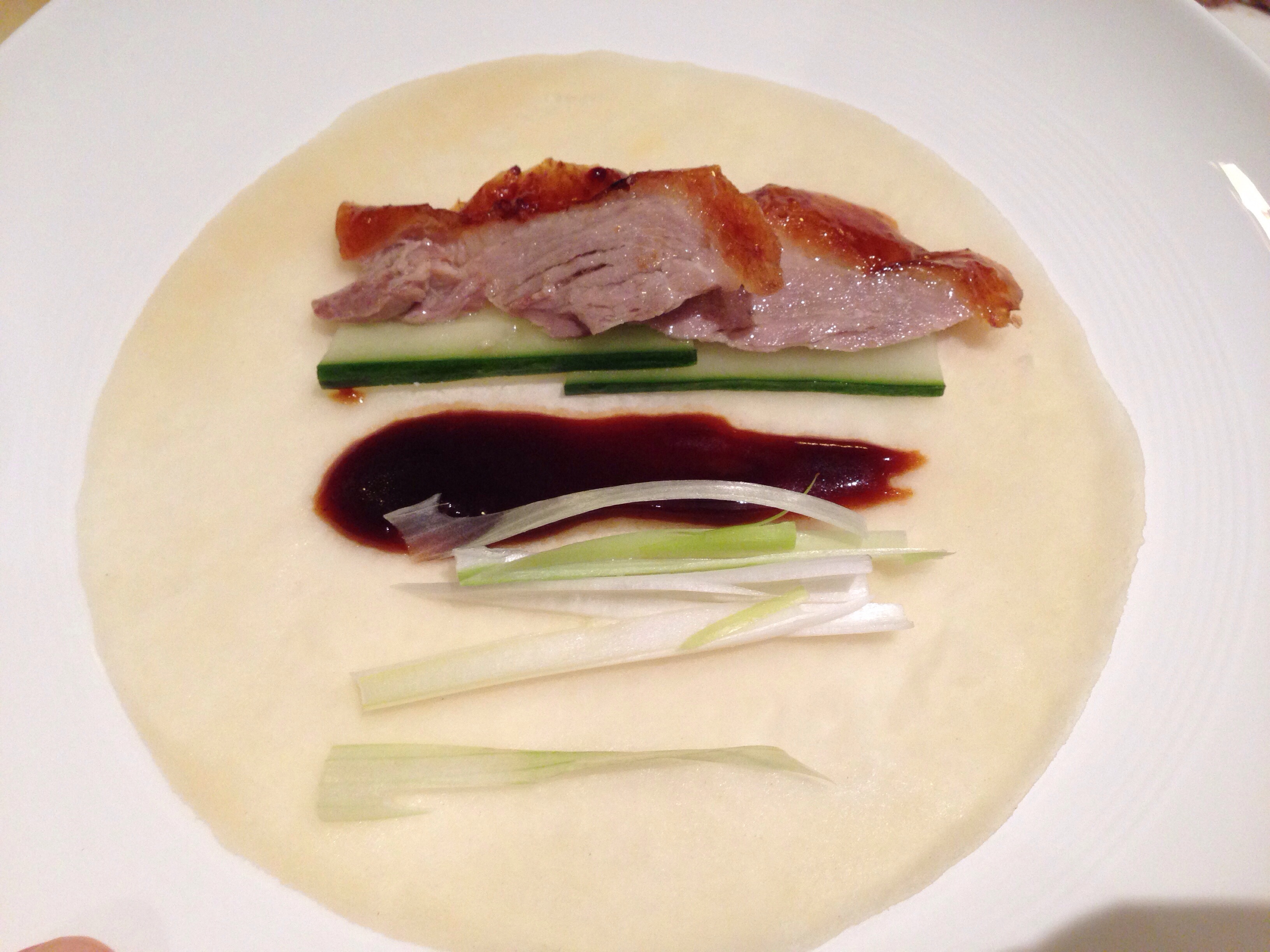 Fried mantou ($3.00). I was keen to see if Mr. Wei’s had this and I was sad when I couldn’t find it on the menu, but when I was ordering I caught a glimpse of it attached to another dish, I asked politely if we could order it by itself and they let us have it as a side. It is fried bread that is crispy on the outside and soft in middle with a slightly sweet taste. (Note: these are pretty small, don’t fall for the illusion of my zoomed in photo).

Duck fried rice. After finely cutting the duck pieces for your duck pancake, the rest of the duck goes into either a duck soup or fried rice, we chose the fried rice option. The rice was served nice and hot, but there was no dominating flavour overall. 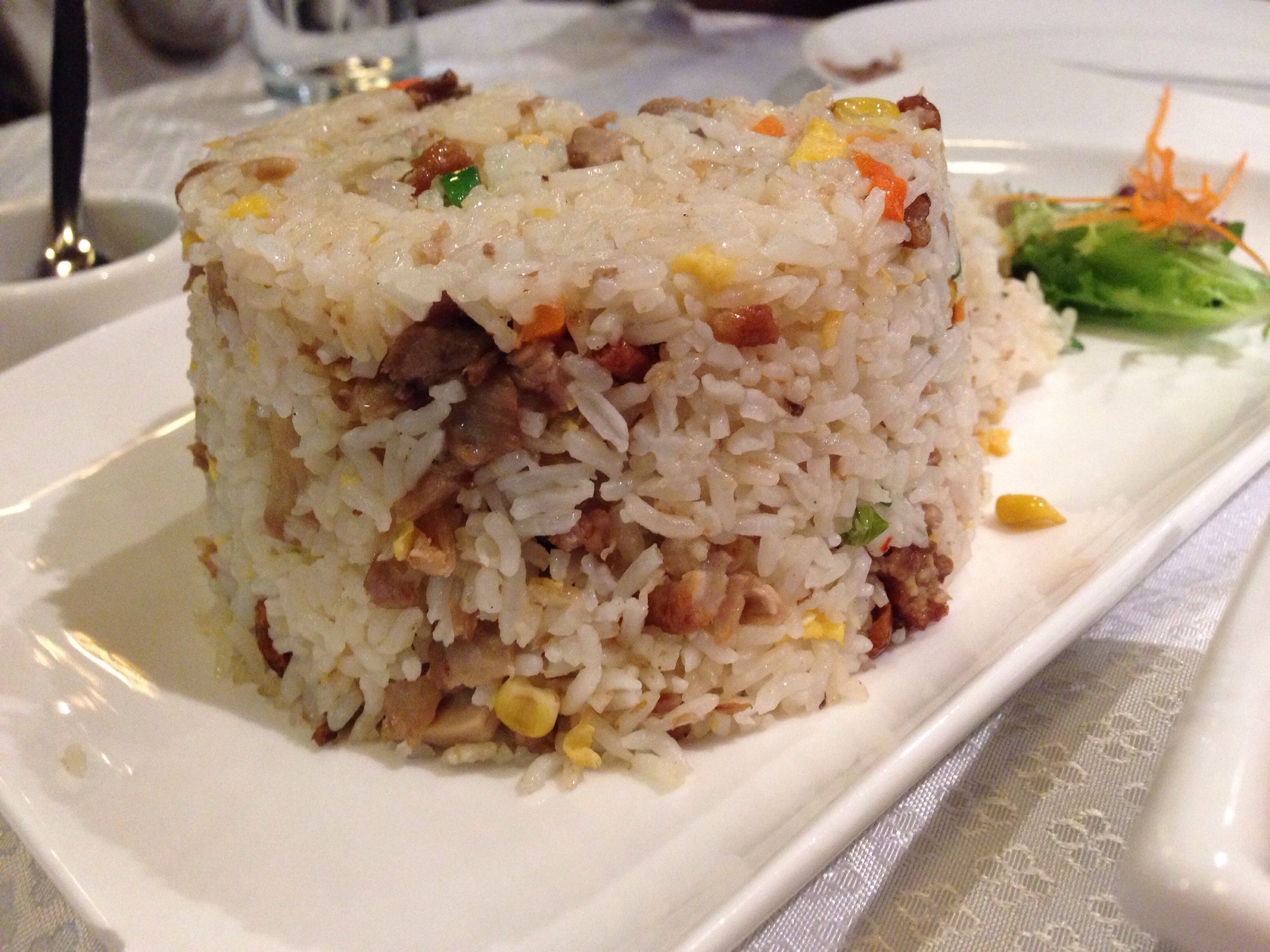 Pork belly slowly cooked pork belly with spice sauce and ground bean sauce, placed on a bed of baby spinach, topped with black bean aged vinegar capsicums ($23.50). When Chinese people eat pork belly, it is usually pretty fatty and tender so some people might be surprised to get this dish expecting something a little different. It seems like a small portion after you discard the fatty skin and share between more than two people. I really liked it but I don’t think this dish is for everyone. 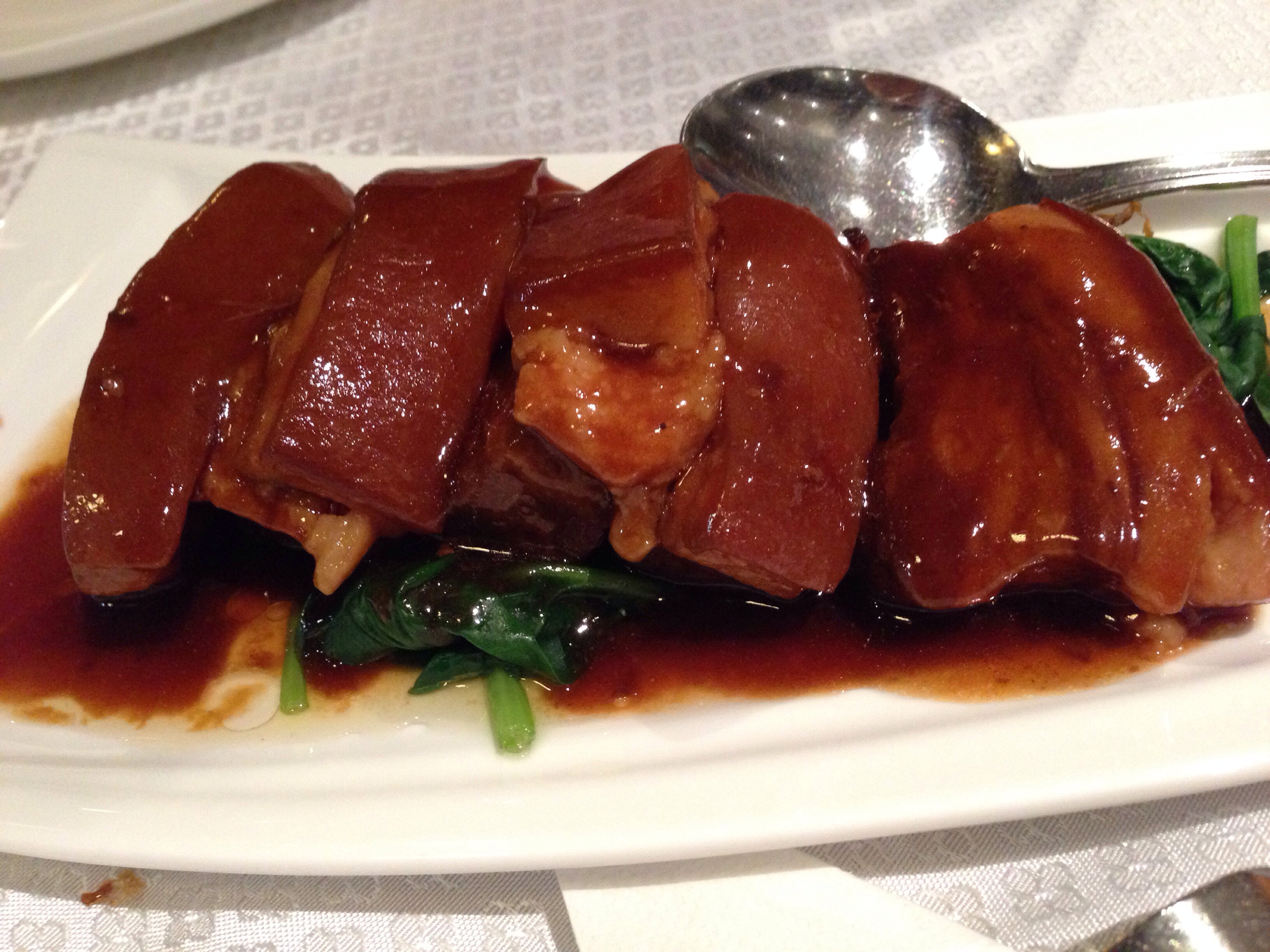 They ran out of lemongrass chicken which I was interested in trying but it might have been a good thing as this was probably just enough food for three people without being glutinous and too over filling. It turned out relatively (in comparison to Wild duck) cheap too at $25 a person.

I don’t know if they have any association with Wild Duck but their menu items are very similar and so are their serving plates. Between my two dining experiences here, my view hasn’t changed and I see Mr. Wei’s as the ‘poor man’s version of Wild Duck’, which isn’t a bad thing considering how expensive Wild Duck can get. I don’t mind the food here, the staff is generally attentive and the food isn’t too expensive. The atmosphere is somewhere between fine dining Chinese and a local take away.

One thought on “Mr Wei’s”